How do I get bird-in-flight shots with a bridge camera?

Hi everyone I'm a newbie, I have a Panasonic FZ72 Bridge Camera and I love to take shots of birds in flight, the problem is the sports mode is too slow and I have no idea what manual settings to use as the other bridge cameras I have had in the past have been fine on the sports setting. I would be very grateful for any help, in layman's terms please. :)

There are two speeds of interest - shutter speed and what I'll group as camera speed.

The shutter speed is the first - too slow and you'll get blur. Sports mode should be OK for this but if it isn't you'll need to select a shutter speed priority mode and then select a fast shutter time yourself. To start with turn the ISO up to at least 800 and probably more to get faster shutter speeds for a given light level - you can always back it off after practice. What shutter speed you need depends on the bird, it's behaviour, the focal length and how steady you are. A soaring vulture might be fine at 1/500, maybe even less if you use IS or a tripod. Wing beats of a small bird are almost impossible to freeze. Hummingbirds are the extreme example - even at 1/4000 they're not sharp.

Camera speed includes focus speed (which you can help with by prefocussing with a half press of the trigger), and shutter lag. This is the time between pressing the trigger and the sensor recording the image. It varies between cameras, but if you're tracking the bird's movement very well, it shouldn't be a problem - unless the bird changes direction. So you need some luck here - more luck than on an SLR as the shutter lag is likely to be more.

You need to get plenty of practice on your specific camera so try going to a park or local nature reserve and taking photos of the common birds. Start with big, slow moving things (most gulls, waterfowl) and move on to smaller, more nimble species (many passerines, but still stick to the ones that fly out in the open).

... the problem is the sports mode is too slow

Depending on what you mean by "too slow" there are a few settings you can try. But a bridge camera is relatively handicapped in two ways of being slow that probably make a dSLR a better choice for BiF (Bird in Flight) shots.

Shutter delay is too slow

If by "too slow" you mean that the time between mashing the shutter button and the picture being taken is too slow, then you main recourse is going to be using a half-press on the shutter button to get your subject in focus and the exposure settings set, before pressing all the way down to take the shot. This can sizably reduce shutter delay.

Autofocus is too slow

If by "too slow" you mean your camera's having a hard time getting the bird in focus for the shot, then you have to get better/faster at aiming your AF points on the bird and getting the lock while it's moving. You have to get better at "tracking" the bird as it circles in the sky; or anticipating a good spot to pre-focus on. One way to help you aim the camera more accurately with a super-telephoto lens is to shoot with both eyes open. Get good at anticipating the bird's movements by studying how it tends to fly, and learn to keep the bird in the frame.

Unfortunately, most bridge cameras autofocus by contrast detection--using the contrast data on the main image sensor to judge if something's in or out of focus, and since it will try both directions of focus (front and back) before it knows which way to go, it can be slower than using a phase-detection AF system that knows which direction to head for. So it's unlikely that you'll be able to snap shots of birds that don't fly in a regular pattern you can anticipate for enough time to get AF lock.

Shutter speed is too slow

If you're getting motion blur either from hand-holding the camera and joggling the camera, or from the subject moving, then the setting you need to look at is shutter speed. This is the amount of time the iris in the lens is open for the exposure. The longer your shutter speed is, the more light you get, but the more chance you have of blur affecting the image.

To combat handholding camera shake, you can use a tripod, monopod, or other form of stabilization, or you can try to keep your shutter speed above 1/equivalent_focal_length. In the case of your FZ72, zooming all the way in is the equivalent of 1200mm, you'd need a shutter speed of 1/1200s or faster. This fast a shutter speed, and the maximum aperture of the lens at this end (f/5.9) is likely to require that you use an iso setting of probably 400, if not 800 or 1600, depending on the lighting conditions.

Subject motion blur can go even higher in speed--the faster the subject is moving, the faster your shutter speed has to be to "freeze the action." I've taken BiF shots with blurred wings with shutter speeds of 1/1000s.

Right tool for the task

Ultimately, a bridge camera often isn't responsive enough to shoot birds in flight. This is why most bird photographers you see will use a dSLR. But that doesn't mean you can't shoot birds with it. Perched, standing, or walking birds are still entirely doable. And, more than any camera gear you could possibly own, your own fieldcraft abilities and knowledge of individual birds is going to be the key to getting successful bird photographs. It may be that you simply have to work on reading bird body language to avoid flushing them. Every beginning bird photographer can show you a few thousand bird-butt shots where they failed to learn that lesson. :)

Others here have explained the camera settings needed to get the shots you want. I'd like to talk about something else - preparing your shot. Believe it or not, this can make things like camera (or shutter) speed less of a factor.

What I've done in the past is set up a feeder in my back yard. I then set up my camera on a tripod (though you could use any sort of place to stabilize it like a table or a flat rock). I put it in burst mode and I focus it on the feeder. I make the aperture as wide as possible while keeping as much of the feeder in focus as possible. (This is a set of trade-offs. If you make the aperture wider, it lets in more light, but less of the frame is in focus.) Then I just wait until the birds come. When I see one I press down the button and take a burst of photos. Inevitably some are terrible, but a few turn out great!

Here are 2 I've managed to capture using this method: 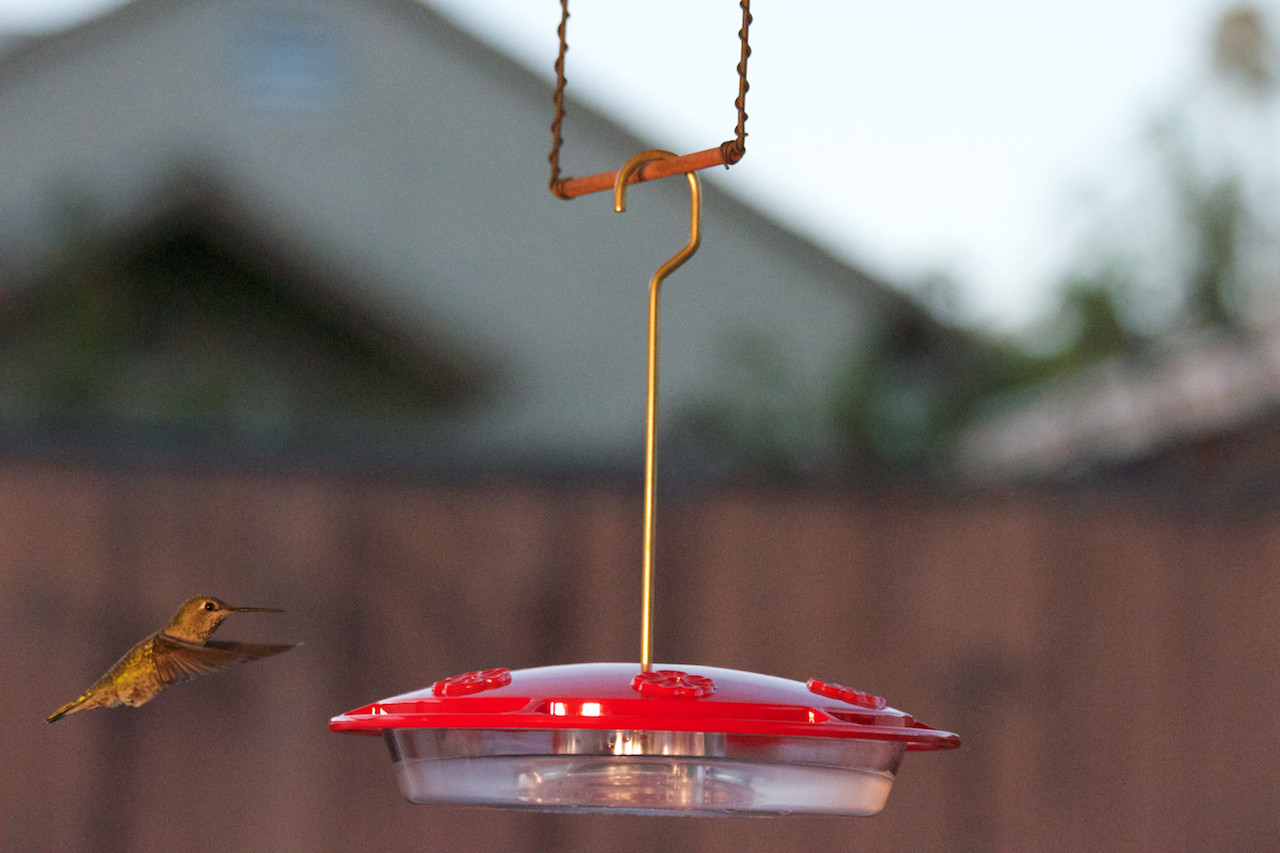 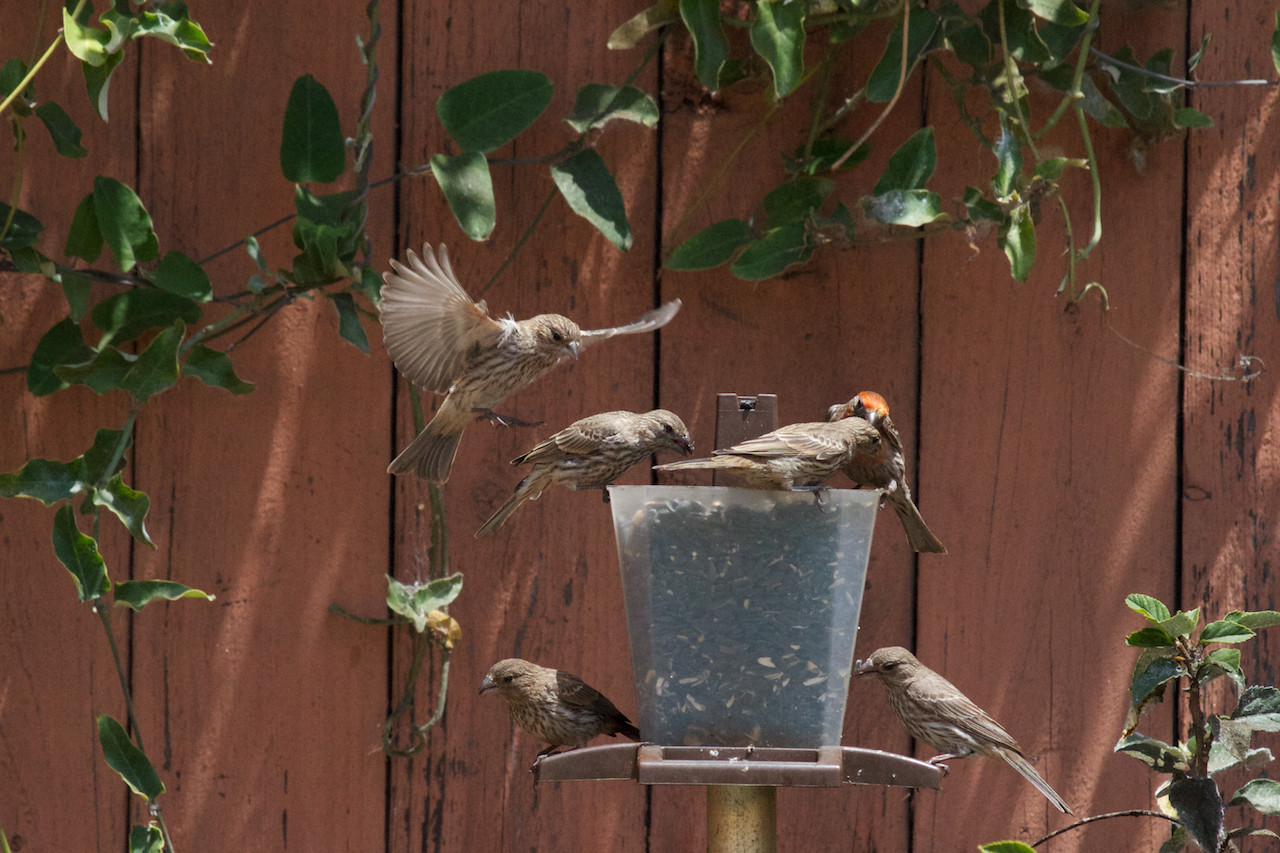 Not the answer you're looking for? Browse other questions tagged birds bridge-camera action or ask your own question.

0
Suggest the best way to take photos of flying birds

4
Is there any bridge camera with an interchangeable lens?
2
How do I choose a bridge camera?
4
Bridge Camera with wide angle lens for estate agent
7
Best easy-to-carry-around Canon (or ANY OTHER) camera plus lenses for bird /wildlife/landscape photography (hobby)?
3
how do I Auto Focus Nikon 55-300mm f/4.5-5.6G ED VR AF-S DX Nikkor to my nikon d7000
1
Can a bridge camera produce similar photos to a DSLR for sports?
3
How advanced is phase detect AF for bird photography compared to contrast detect AF?
0
Why does my bridge camera underexpose in Tv mode at 1/1000s?
8
How can I get sharp bird photos when the bird is further away?