Why is my large format lens so much smaller (in length) than my 35mm-format lens?

In general I have found that as the focal length of 35mm (or APS-C) lenses increases, the physical length of the lens increases as well. However, my large format lens is much thinner than other 35mm lenses of equivalent focal length. Here is a picture: 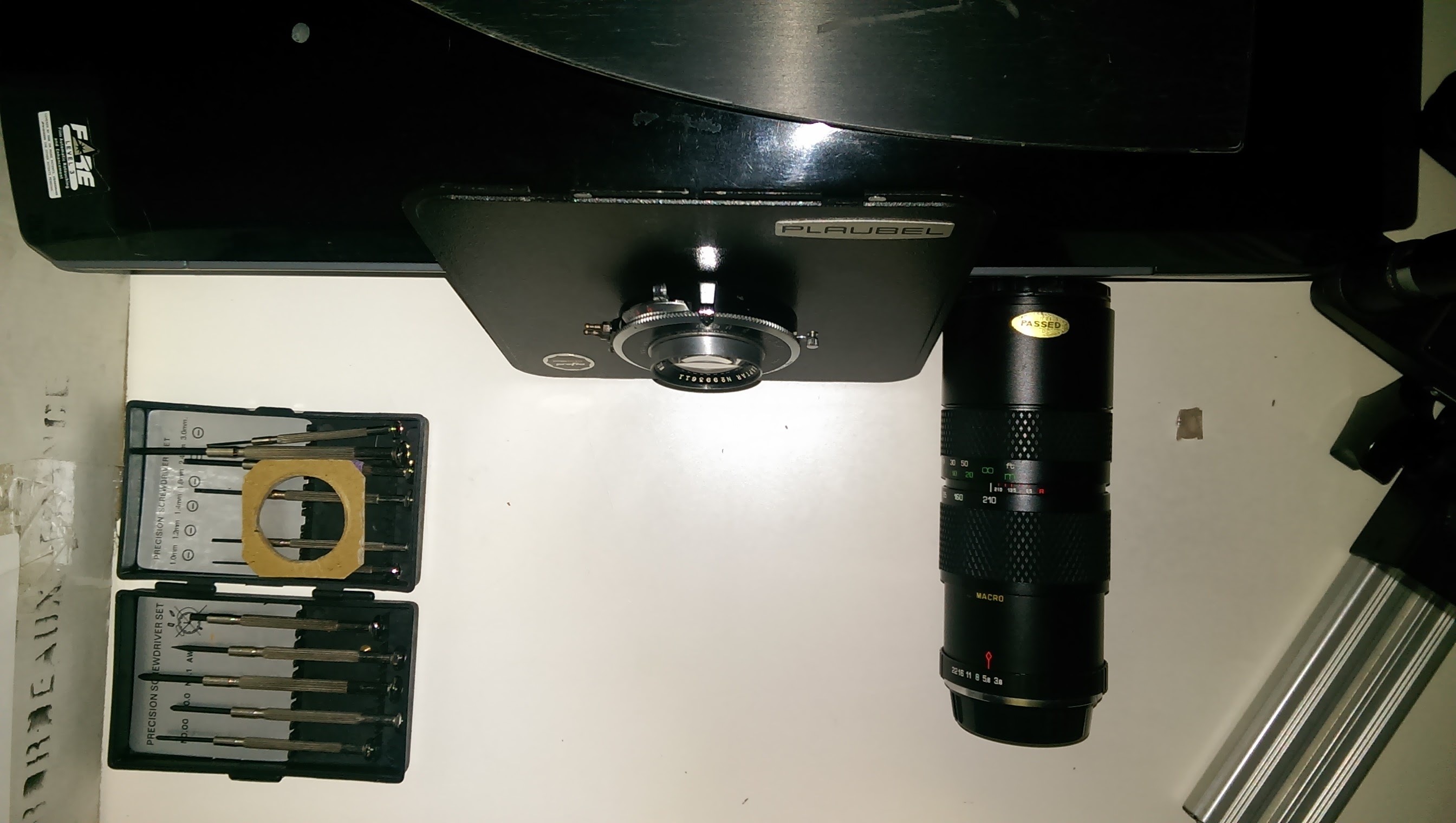 The large format lens is a Wollensak Raptar 135mm f4.7, and it not more than 5 cm long. The lens next to it (albeit slightly unfair as it is a zoom) is a Sun telephoto zoom, 85mm-210mm f3.8. In general all large format lenses seem to be rather diminutive in length. Why is this?

The focal length is the distance from the (theoretical) center of the lens to the image plane. On the large format camera, there's a lot more camera between the lens and the film.

The lenses are also often relatively simple — there's no need for a focusing mechanism in the lens itself, for example.

@osullic gives the example of the Schneider PC TS Makro-Symmar 90mm f/4.5 for 35mm and Schneider 90mm f/4.5 Apo Digitar N for large format. They appear to have similar optical design (six elements in four groups), and this is particularly interesting, because the former is a tilt/shift lens. Tilt lets you change the angle of the focal plane for depth-of-field effects; shift changes the appearance of parallel lines. As with focus, tilt and shift are both adjustable in large format by adjustments to the camera.

So, basically, with 35mm, much of what would be in the camera in large format is moved to the lens, which of course makes the lens bigger.

Take a look at these two Schneider lenses that both have 90mm focal length: 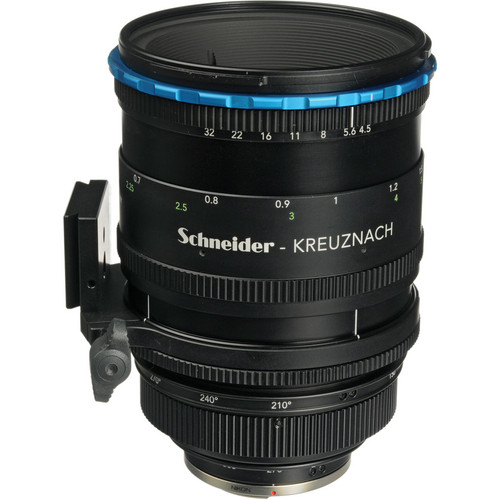 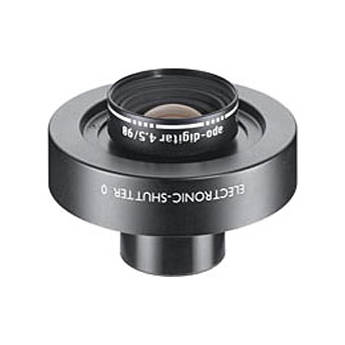 The first has coverage for "35mm" format, the second coverage for large format. I am not sure, but I think the main reason for the difference in size is the fact that the large format lens is a "simpler" design, i.e. fewer elements/groups. The reason a large format lens can use a simpler design is the distance between the lens board and the film plane - the lens need not project light at extreme angles out its rear element, whereas a 35mm-format lens must do so, and so requires a more complex design. Also, the fact that large format is so much bigger than 35mm format might have something to do with it; because 35mm format is smaller, any distortion/imperfection is "magnified" to a much greater degree, so more elements are incorporated to correct for any distortion/optical aberration.

A few points to consider (mostly adding to mattdm's answer):

A manually focusing 135mm Nikkor 2.8 lens in F mount is about 91.5mm long, and looking at a drawing of the lens most of the optical elements are in the front. So a comparison with a zoom lens isn't really fair -- it is a much more complicated lens.

Strictly speaking, a telephoto lens is one designed to be shorter than its focal length, otherwise a 500mm lens on an SLR would be mostly a big empty tube with optical elements at the end. The telephoto design allows the lens to be shorter but requires more optical elements. In a view camera this type of construction isn't normally needed as the camera bellows can expand or contract to suit the needs of a wide range of focal lengths (and focusing distances).

The word lens is from the Latin, shaped like a lentil seed. This is a disk that bulges out of both sides, we call this lens shape, convex – convex. A single transparent convex – convex lens will do the deed. We task the camera lens to gather image forming light rays from a 3 dimensional world (object at different distances) and project their image on a flat light sensitive surface. We task the enlarger lens to gather image forming rays from a flat object (negative / slide) and project that image on a flat light sensitive surface. The two tasks are similar but the differences are profound.

The lens maker’s desire is a lens that projects a faithful image. This has never been achieved. Every lens ever made fails to yield a faithful image because the lens is a wave guide that alters the path of light waves. Our camera and enlarger lenses are converging lenses. Light rays transverse the lens and their paths altered. The light rays emerge, tracing out a cone of light. Sorry to report that some of these redirected rays fail to hit their intended target. These errors are called aberrations from the Latin for deviation.

There are seven major lens aberrations. Five are independent of the color of the light, two are based on the color of image forming rays.

The lens maker strives to mitigate these seven aberrations. He/she dealing is using different shape lens elements and a mix of different density glass. The camera lens tasked to image a curved world on a flat, and the enlarger lens tasked to work flat to flat pose different problems.

Some lens elements are cemented together, some are air-spaced. The air-space between the glass is also lens-like in its shape. The air-spaces act just like a glass lens element as their width becomes part of the lens formula. The focal length is the distance from rear nodal to the image when the lens is imaging an object at infinity. The back-focus is the distance lens to image plane. Many times, the camera lens must have a longer back-focus to accommodate mechanical considerations. The rear nodal is thus shifted back towards the camera body. It likely will fall in air behind the lens. Conversely, to make a telephoto less unwieldy, the barrel is artificially shortened by shifting the rear nodal forward. It can even fall in air ahead of the lens. These shifts in the rear nodal are valued art of the lens maker.

Miniature cameras have fixed distances from the flange of the lens mount to the focal plane. Often in the optical path are reflex mirrors and gadgets to measure light. The back-focus distance of a lens must be adjusted so that when the lens barrel is imaging an object at infinity, the apex of the cone of image forming light just kisses the surface of film or sensor. The large format cameras utilize bellows that allow positioning the lens near or far from the film plane. No need to shift the rear nodal, a simple three element of the Tessar generally exceeds what film need to be pictorially useful.

Not the answer you're looking for? Browse other questions tagged lens optics lens-design large-format or ask your own question.

1
Could a phone-camera have a medium-telephoto lens and still fit in a phone?
1
How do I take good portraits with a bridge camera and superzoom?
4
Which EXIF tag to set for the 35mm equivalent focal length?
4
Why do superzoom designs keep expanding on the telephoto rather than wide-angle end?
1
Equivalent focal length and aperture of 150mm medium format lens on a 35mm camera
3
Is a 30mm lens a good general purpose lens on an APS-C sensor?
6
What enables the Canon RF 70-200 f/2.8 to be much smaller than the EF version?
2
Différence between a long lens design and a telephoto