My now passed away father took this photo of me in the 1990s. My guess is that it's a Nikon. He owned a number of Nikon SLRs. Is anyone able to identify the camera? (Sorry about the shaky photo). 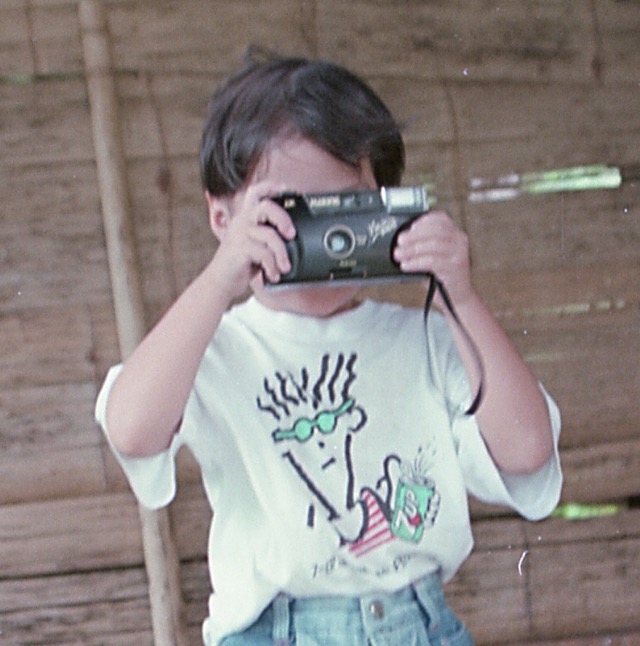 It looks to be one of the Hanimex Vision series of cameras, possibly a Vision III. Hanimex was a company that imported cameras to Australia and New Zealand. They were founded shortly after WWII and early on they imported European and Japanese cameras branded under the Hanimex name. In the following years they also marketed flashes and lenses made by several manufacturers under the Hanimex brand name. They were also the exclusive distributors of Fuji cameras and photographic products in Australia and New Zealand from 1954. Following a series of transactions that saw Hanimex bought and sold by several holding companies, in 2004 Fuji Corporation acquired ownership of the Hanimex brand and discontinued the use of the name, although they still own the rights to it.

The Hanimex Vision series of cameras were very similar to some Halina camera models and were very likely manufactured by Haking of Hong Kong, the same company that made the Halina line.

Here's an image of a Hanimex Vision III recently offered for sale by ozcamera.com. These cameras were often offered in a variety of colors. 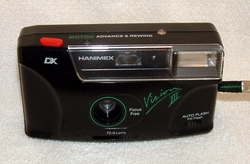 I've not been able to find any example of a Halina Vision model beyond the initial 'Vision' (with no additional model naming) where the model name is printed up next to the lens opening as pictured in the image from the question and as pictured in the example above. With the Halinas the "Vision" is always printed down in the lower right corner of the front of the camera. None of the pictures I could find of DX (auto film speed detecting) capable Halinas had the distinctive "DX" marking that is visible just below the shutter button in the both the photo in the original question and in the example above. And none of the initial Halina 'Vision' models had DX automatic film speed detection capability.

I believe it is a Nikon One Touch. My mom had one of these.

BrianBrian
1
1
Add a comment  |
Highly active question. Earn 10 reputation (not counting the association bonus) in order to answer this question. The reputation requirement helps protect this question from spam and non-answer activity.

28
What medium format film camera should an SLR guy look at?
5
What should I look for in a ultra compact camera?
0
Compact camera for every-day-carry
4
Where can I find B&W film for an Imperial Satellite 127 camera?
2
Why did only the last picture I took actually come out when developing a 35mm film roll?
4
What is this folding camera with pronounced angular or beveled corners?
6
Are scene modes on compact camera much useful?
6
Can anyone identify this Twin-Lens Reflex 1940(ish) camera?