The Purpose of the Length of a Tripod Plate

For a teleprime such as mine, is there such as a thing as a right "length?" Kirk lists one that looks shorter than Wimberley, see P-30. There are other "universal" ones which seem to be shorter and there are also ones that are longer.

For the longer ones with two screws, I can see that being useful if the lens itself has two screws like the Nikon 400mm f2.8. However, in general is there an optimal length of the tripod plate? I was thinking of getting a P-40 or something longer since the balance of the lens is towards the front element but if it's too long, can the plate warp or screw be damaged if I'm too far out?

I can see the problems of the longer plate if it impedes some basic functionality like holding the lens or focusing. Shorter ones might not allow for the lens to balance correctly on the tripod.

I'm aware of Nodal tripod plates and their usage but since I'm not doing panos I don't need to look into those?

Trust the designers of the lens and get a plate that matches the foot they chose to include with the lens' tripod collar. A plate should ideally be just long enough that the entire foot can rest upon the plate without any more additional overhang than is necessary. You always want to center the weight of the lens on the tripod at a point underneath the foot, not in front of or behind it.

The purpose of a longer plate is not to allow mounting the lens further forward or back than the limits of the foot on the lens' tripod collar. The purpose of a longer plate is to match up with a lens that has a longer foot and make it easier to mount/dismount the lens from the tripod or other support. Most heavy lenses have feet that are longer than the receivers on most QD tripod heads. There is room for adjustment for extenders, varying camera body weights, etc. within the range of the length of the lens' tripod collar foot. If you can't balance the camera and lens over the limits of the length of the tripod collar foot you may have too much weight hanging on the lens.

The advantage of two screws is primarily with regard to preventing rotation of the lens foot on the plate. If a foot or plate only has a single screw, then an anti-rotation feature is also needed.

Here's the current version of the Nikon 400mm f/2.8 mounted on a gimbal head. The lens' tripod collar foot is place in the correct spot to balance the lens and a camera body somewhere between the front and back of the foot as seen here. Notice that the end of the foot towards the camera is lined up with the back edge of the gimbal mount, even though the QR plate extends a tad past both the front and rear of the lens' foot. If the combination is still front-heavy, you can adjust the QR plate rearward in the receiver on the head until the end of the lens' foot towards the front of the lens is above the front edge of the gimbal head's receiver.

If your 400mm f/3.5 won't balance properly with the foot over the head, then your best option something like this. Note that the tripod foot is still over the gimbal head's receiver as designed. Also notice that the bracket connecting the foot and the additional support on the front of the lens is made of "u-shaped" stock which makes it considerably stiffer than the QR Plate, which is still beneath the tripod foot and above the gimbal head's receiver. None of the part of the QR plate that extends behind the back of the lens' foot is load bearing. 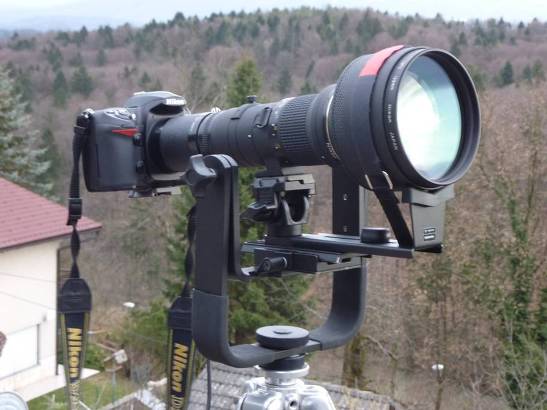 1
Selecting a tripod for use with very long focal lengths

7
Which tripod heads accept the Arca-Swiss plate system?
6
What kind of tripod/head/rail system can I use for precise vertical-only movement?
5
What is the "round" tripod plate used for?
13
How can I prevent blurred images when using a tripod?
9
Co-linear dual tripod mount for huge lenses
4
How much should Load Capacity influence my buying decision for Tripod Legs for a Large Telephoto Lens?
3
Choosing Tripod Based on Load Capacity?
3
Arca-Swiss Z1 SP quick set options