Why do the cameras Canon 1Dx, Nikon D4, Nikon D5 have a different form factor than other DSLRs?

There are a few reasons why the battery grip is integrated:

Really I think it comes down to, why not? The disadvantages are primarily weight and size.

Someone who is requiring a DSLR at this level for their work, such as a sports photographer or photojournalist is likely not very concerned with having a somewhat smaller camera body and is instead concerned with having every advantage possible to get the shot. A built in vertical battery grip will do just that.

Below is a a cut-thru of a Nikon D5, that shows that most of the space in the additional bulk at the bottom goes towards the battery (the three circles on the bottom represent the battery chamber). 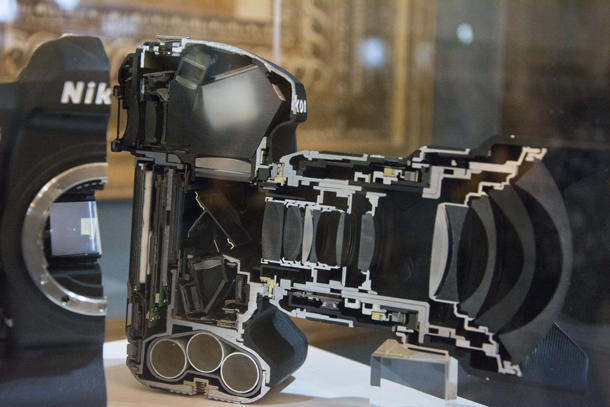 Such "battery grip" or "portrait grip" is a standard accessory for almost every SLR for the last several decades. For almost every SLR you can buy an accessory to bring it up to D5 form factor. Today, for DSLRs this grip adds 2 features: bigger battery and better handling in vertical orientation.

Now, your question boils down to "Why top models have it attached permanently?". The answer is:

Because people who buy top-of the line professional cameras usually bought the grip anyway, it was logical to have it built-in. This way the entire setup can be better balanced, more rigid and more resistant to damage.

What we now call "battery grips" first appeared during the film era as "motor drives". They connected to the bottom of a camera and had a motor that was geared to the film advance in the camera. The motor also required batteries that were inside the motor drive. The batteries in the camera itself, if there were any at all, were very small and used only to power the light meter if the camera even had one. Film was typically advanced using a mechanical lever operated by the photographer's thumb. A battery driven motor could advance the film at a much faster rate than most photographer's thumbs and also allowed the photographer to maintain the camera position and grip needed to shoot multiple frames without moving the right hand to advance the film.

When film cameras started becoming more sophisticated and started using semiconductors for things such as exposure calculation and servo motors for mechanical tasks that were previously done using springs cocked each time the film was advanced (stopping down a lens' aperture, resetting the shutter curtains, etc.) the batteries inside SLRs became larger - and so did the overall size of SLRs. Motor drives made for these types of cameras exploited this new electronic capability. Some of these motor drives also included a second (electronically controlled) shutter button for vertical shooting. Some included a larger grip that fit around the end of the camera and placed a shutter button in front of the camera's shutter button. Some increased the options available for exposure control made possible by the higher battery capacity and space for electronics made available by the grip.

Pictured below is the Canon Motor Drive for the New F-1 introduced in 1981 and The same motor drive as installed in a slightly used New F-1. 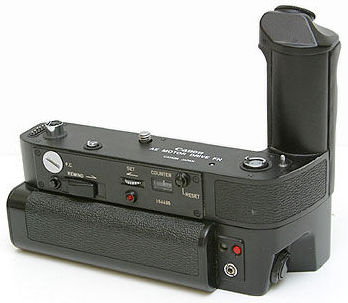 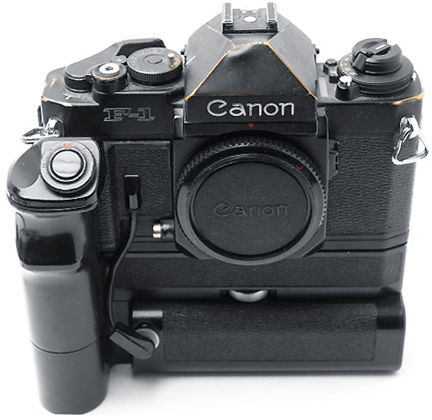 In 1986 Canon introduced the T90. It was the last SLR they introduced that used the manual focus only FD mount. It was the first camera to incorporate many elements that became commonplace in the auto focus EOS series introduced the following year. It was also the first that had a noticeable horizontal bulge below the main part of the camera body that was not detachable. This bulge contained an integrated motor drive and a large (for the time) battery compartment that used four 1.5V AA batteries. These batteries lying horizontally across the floor of the camera dictated the shape of the bulge. Users soon discovered that this bulge also allowed the camera to be placed sitting on its floor plate with many smaller lenses attached without falling over. To get vertical shutter control, though, one needed to purchase the optional T3 vertical shutter button that fit into the socket for the wired cable release placed in the appropriate position for portrait shooting. 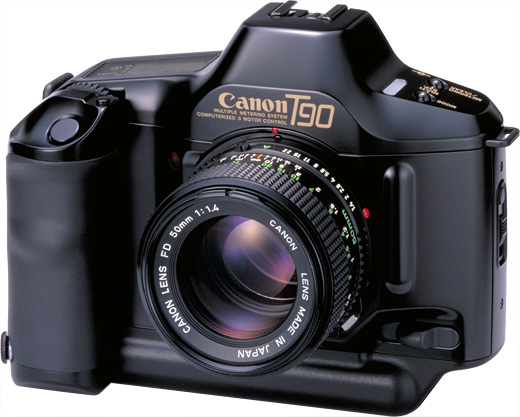 As AF systems were developed and included in cameras the energy demands of cameras called for increased battery capacity to power the movement of focus elements in the lens. The larger the lens and the heavier the focus elements, the more energy was required to move them. Although most AF film cameras had built-in automatic film advance and did not have integrated battery grips (a few of the highest frame rate bodies did), most professional purchasers added them for the increased battery capacity and vertical controls. A few AF film cameras from Nikon and Canon designed for very high (at the time) frame rates were designed with required battery grips but they were more like permanently attached versions of the detachable grips used on other models than seamlessly integrated grips like we see on flagship professional models today.

With the advent of digital cameras the need for a more powerful motor to drive the film advance was obviously no longer needed. But the need for increasing battery capacity became even greater. Gone were the days of unmetered manually focused, manual exposure that required no battery power at all to be able to take a photograph. Everything the camera does now requires electrical energy. The power demands of the earliest digital sensors and the accompanying processing systems combined with moving the focus elements of AF lenses increased the amount of energy needed to take a photo. The earliest experimental digital cameras were film bodies adapted to contain a digital sensor that were attached by cables to a suitcase sized unit requiring mains power that contained the electronics which dwarfed the size of the original film body upon which it was based. As the technology progressed eventually a battery powered handholdable camera became feasible. Pictured below is the Canon EOS DCS 3, the first commercially available interchangeable lens digital SLR offered by Canon in 1995. The module made in conjunction with Kodak that housed the batteries and electronics for processing and storing the digital images was roughly the same size as the EOS-1N film camera upon which the camera was based! 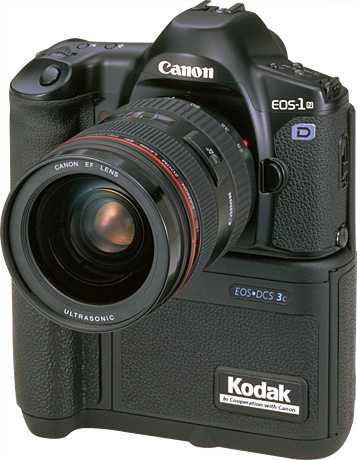 Technology marched on and digital SLRs became possible that were closer to the size of their film counterparts. But since most purchasers of top level professional film camera models in the AF film era also purchased and installed battery grips to increase the camera's battery capacity and gain the advantage of vertical controls, it only made sense for the camera makers to build the increased battery power into the main camera body on their flagship professional models.

This allows several advantages over the optional detachable battery grip:

A lot of pros who use advanced (but not flagship) bodies like the Canon EOS 7D Mark II will get a battery grip for intensive use, so it makes sense to have an integrated vertical grip for the flagship model. You will generally be using very large and heavy lenses with these flagships, and long battery life is an absolute requirement. The larger body also allows for more space for electronics, including faster processors and more buffer RAM. The flagships also have an extra LCD below the main display for file and other miscellaneous status information; delivering images fast is a huge deal when you're shooting for press and having that added information on the camera body helps with workflow when it comes time to deliver images.

Speaking as a sports photographer for my college on a completely different system (Pentax K-3 II), I've found the optional battery grip to be essential. The camera just doesn't feel right without it when you put a fast telephoto lens on it.

Not the answer you're looking for? Browse other questions tagged canon-1d-x nikon-d4 or ask your own question.

2
Does the Nikon D4 capture 16-bit images?
8
Why did Canon come up with APS-H and why did the top-of-the-line 1D's *still* use it and 1.3x crop, when FF existed for four years (the 5D)?
5
What's the difference between “exposure level indicator” and “exposure setting meter” in the Canon EOS 1DX Mark II viewfinder?