What causes these streaked rays from light sources?

I recently bought an LG G4, whose camera can shoot in an auto and both manual mode (I can manually set the iso, aperture). I shoot 100% of the time in auto.

It takes better than average photos at night but when in Seville one night the photos it took were a disaster. Please see this example: 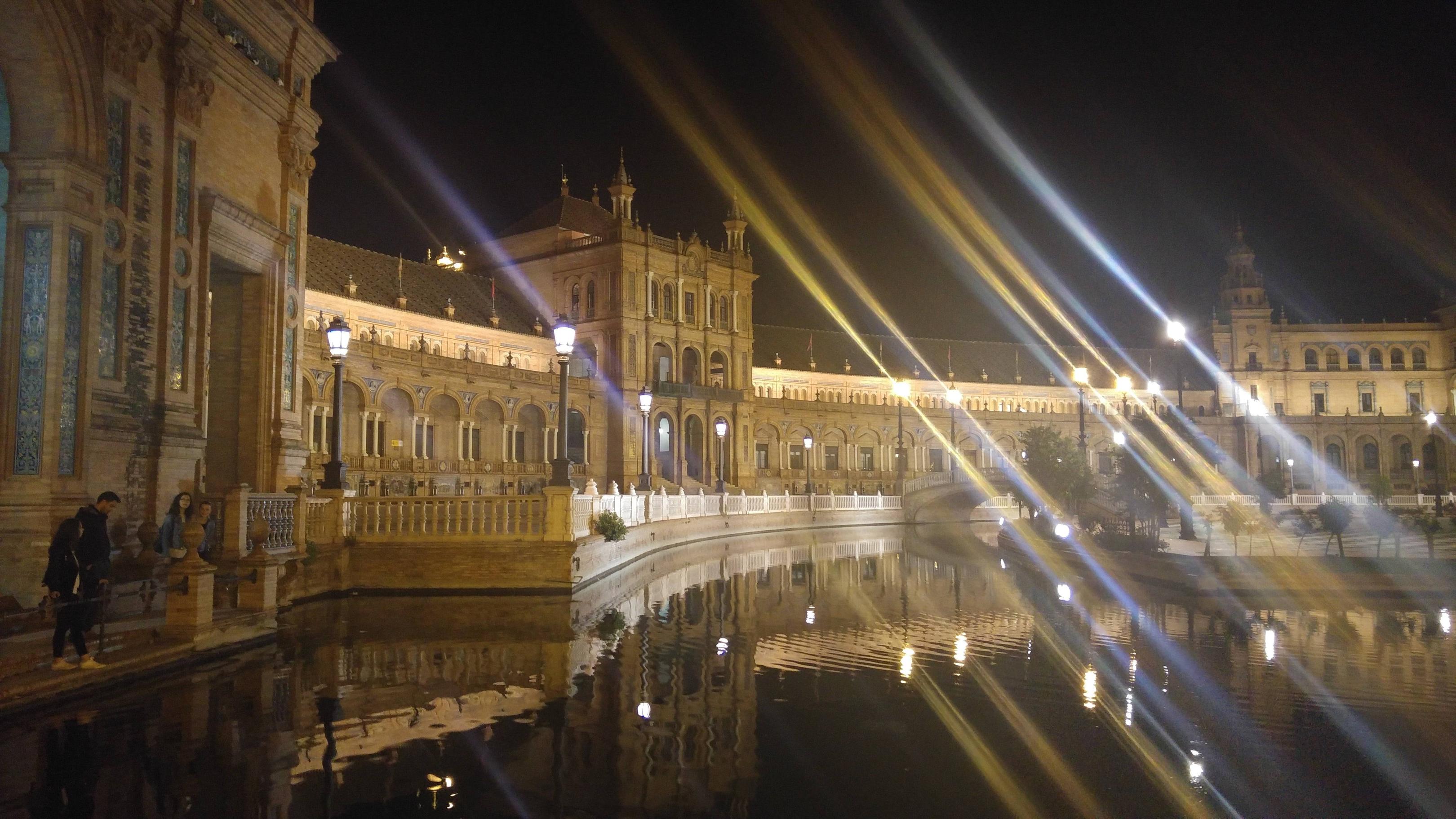 I find the background lighting was captured very well, but the light sources totally screwed up the photo.

Why is this happening? The lens was clean. What can I do to improve the quality of the future photos in this situation?

Attached 2 other photos taken before and after this problematic one (couple of hours distance). They seem fairly in the same conditions (direct light) yet the photos are decent. 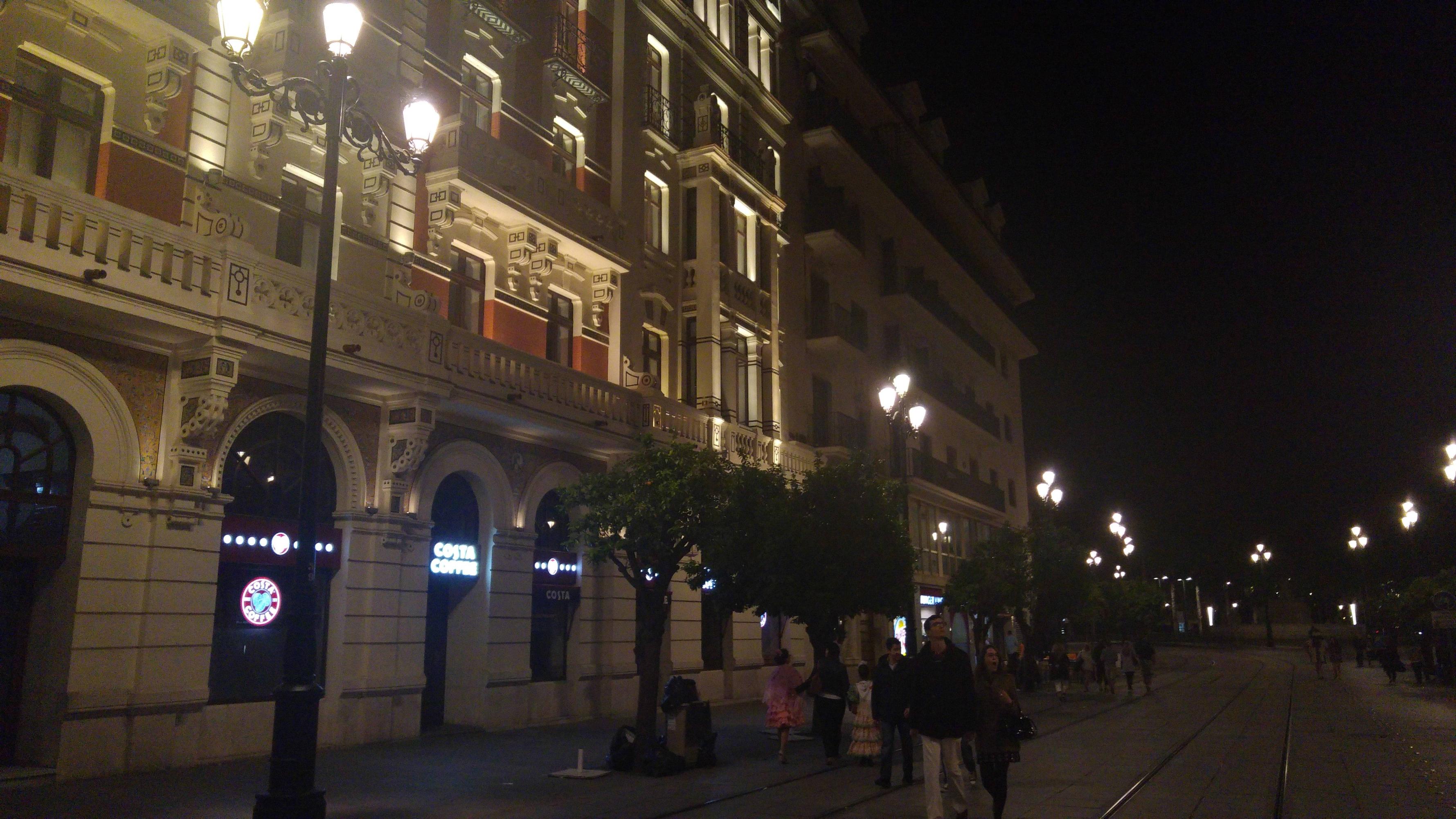 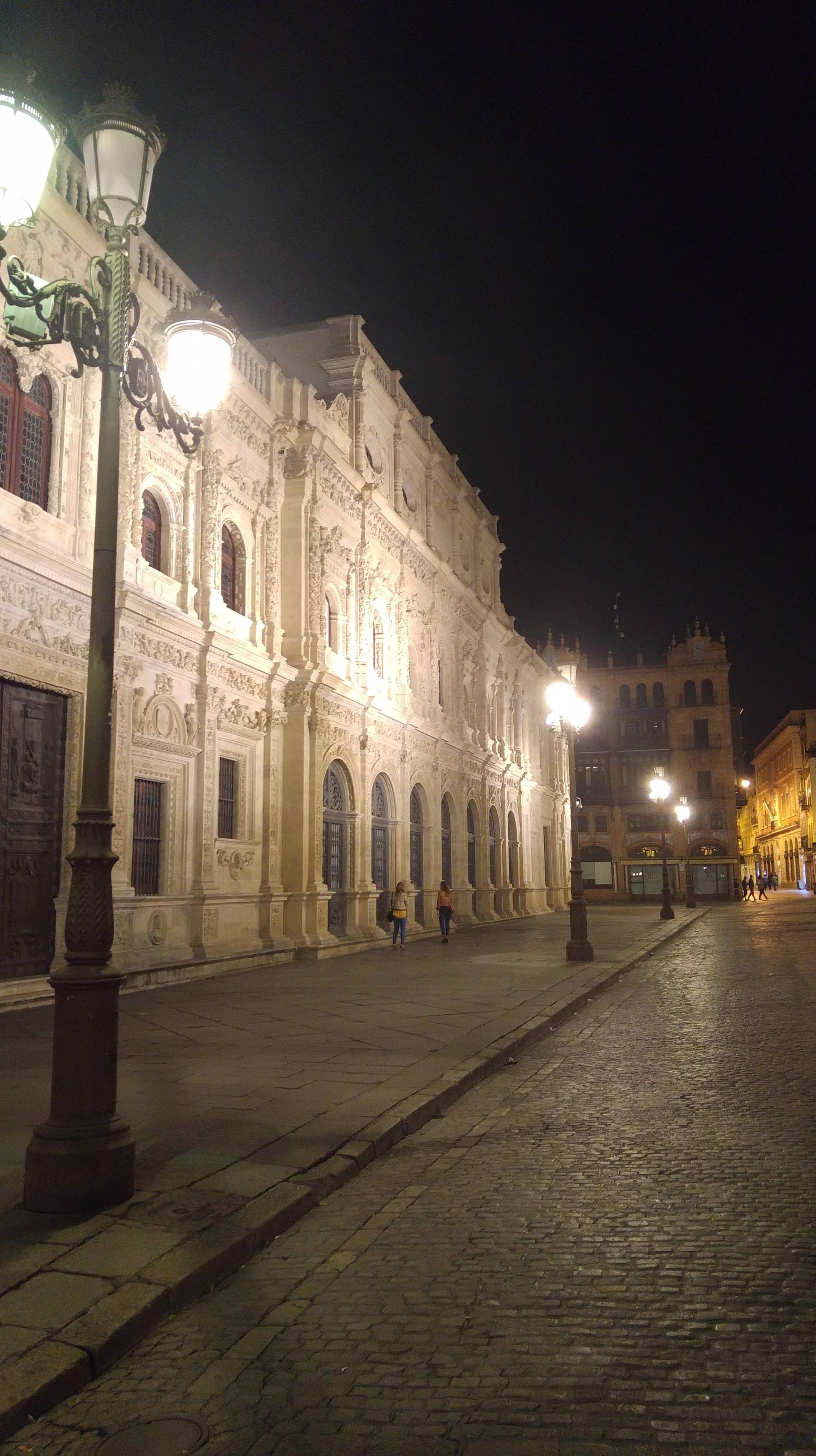 In my opinion that "flare" is caused by a dirty lens. I'm guessing you attempted to clean it, by using a wipe, but failed to properly clean it, which is why the flare has directionality.

Try using a micro fibre cloth. I recently bought some that are designed for use in the kitchen, and it set me back by only a single dollar.

I use these for cleaning my belongings all the time, which for example include a cell phone, glasses, and handheld electronic devices. It could also just be the result of condensation.

It is likely a film of some type in your lens that has been streaked along a single axis. I've gotten similar effects after trying to wipe the moisture off the front of the lens when shooting in hot, humid conditions with a camera/lens that had just been in cooler conditions. I've also gotten similar effects after attempting to wipe a smudge off the lens and only succeeded in spreading it around the surface of the lens. In the cases where the cleaning cloth was used in circular directions the lines from various lights in the scene were all pointed in different directions based on the position of the light in the frame.

In Alaska sometimes in the winter we get ice fog (small frozen water particles in the air). This results in being able to see a ray of light shooting through the air. You can see shafts of light shooting up all over town even if you can not see the light source.

Normally one can not see light on air molecules but in this instance the particles of frozen water in the air are refracting the light making it visible. I thought perhaps that in the photo in question that fog, mist, moisture, particles in the air were the cause of the "problem" the OP was asking about.

A beautiful side effect of this is that the particles freeze on trees, power lines, etc., this is called hoarfrost, and the longer the cold snap lasts the thicker the hoarfrost gets.

Nothing is ever a disaster because it can always be used as an example. : )

I notice that the before and after shots you include for comparison have a different kind of luminary from the first one with the "issue."

You show "solitary" lamp housings and "triple-headed" ones that appear as you expected.

Looking at the reflections of the "solitary" lamps on the ridges of ripples in the relatively smooth water produces a similar distinctive source of flare for each reflection point as from the luminary itself.

Not all of the sources have the same amount of this flare. A couple appear to have none at all. The flare matches the colour of its source.

My first impulse is that something was between the lens and the lamps during the second shot that was not there for the first or the third.

What would cause that kind of flare?

Judging by the direction and the type of flair and the camera, that something was one or more hairs or threads from a hat you may have been wearing.

Sorry, that's all I've got for you. BTW, how long was your hair? Were you wearing anything like a hat—everyone else was wearing a jacket.

I suspect that in the first photo the camera choose a very high aperture like F22 or higher (and a high ISO) which may cause flares when the light source is very bright compared to the rest of the photo. such as when shooting the sun or street lamps at night like in this photo. This a often desired affect, if the aperture was manually selected to a lower number aperture ie F16 (wider), the flares would probably diappear.

Not the answer you're looking for? Browse other questions tagged image-quality artifacts smartphone lens-flare or ask your own question.

0
What is causing the wispy white artifacts in this photo?
0
What causes these “striped” streaks from light sources?
56
Why do light sources appear as stars sometimes?
10
What causes lens flare along specific axes?

6
Is camera damage causing these severe diagonal lines from concentrated light sources?
8
What causes these green dots in my image?
14
is it normal to get significant lens flare with a 50mm f/1.8 prime lens?
0
Dull and grainy photos
3
What causes this weird angled glowing blur around lights on my low light shots?
1
What causes these reddish spotty artifacts?
19
What causes these white, squiggly lines in my photos?
17
Why is this smartphone picture better than this dedicated camera picture?