How to cope with high contrast?

Many times (especially around midday), we encounter lighting situations where the contrast of the scene is too high to capture with a camera. What can we do to create a useful picture in such environment, besides completely blowing the highlights or shooting a silhouette? 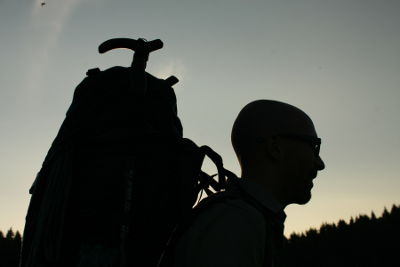 Here, I went with the sky.

As others have stated the main options are fill flash or multi exposure. I thought I'd post this handy example I shot recently where I tried both techniques:

This is the result of using fill flash:

The flash was off camera and to the left, near the ground. I was intentionally trying to get a very dramatic lighting effect, had I used the flash on camera the shadows would be less dramatic and the light more even.

This is the result of two exposures manually merged into one file:

In general the pros and cons of each method are

This last point is worth expanding on. In my example the subject isn't being lit by direct sunlight. So where is the light coming from? Some of it is from other parts of the blue sky (refracting of particles in the upper atmosphere and turning blue), a small amount is bouncing off the clouds (which had almost gone by this point) but a significant amount of it is bouncing off the green grass in front of the subject.

If you boost the shadows too much using HDR, you can get colour shifts, as the shadows by definition aren't lit by direct light, only by light that has already bounced off other surfaces and picked up their colours!

The obvious (in the particular example you gave) is to use a fill flash. Then, I'd shoot RAW so I can preserve more tonal information for working on in post. Last, comes HDR, but I never did that myself. In the case of too bright skies, you can try to use a polarizer to reduce the amount of light from the background while still keeping the details (and even enhancing its looks).

If you can control the scene itself, move the subject to a different place maybe, where it is more lit and thus reducing the exposure difference to the background.

Fill flash can work although you should try and use a gel to balance the color of the light with daylight...

I am partial to reflectors, because then you are using the same light. Even just a small one might have worked for the shot you were taking there.

Also make sure to meter to the right, and as ysap noted use RAW... push the exposure as far to the right as you can and then you can usually recover a good deal of shadow detail using Photoshop or other editing tools.

Depending on the scene, another option would be a graduated neutral density filter. For landscapes, in particular, this would allow you to decrease the intensity of the sky while maintaining intensity for the foreground. There are various strengths available, so the amount of filtering will depend on the actual scene, time of day, etc. This works well when the dividing lines are relatively even and can be lined up with the filter.

For the example you gave, as others noted, it's a classic fill situation for a flash which would have no effect on the background, but would light the subject. Alternatively, a reflector can be used to direct the light on to the subject, a very common technique for staged shooting outdoors, but in most cases I'd suspect that you're more likely to have a flash available than a large reflector. Mind you, any light surface can potentially act as a reflector, so you don't necessarily need to a store bought one to pull it off.

This is my attempt to summarize various ways this can be handled:

Although this question has a community wiki answer, I want to explore a bit more the topic and categorizing it.

Middle day is probably not the real situation where you have a background-object contrast. This situation is more feasible during dusk or dawn, or on an interior-exterior scene. Midd day will render high contrast shadows on the same object.

I will separate the idea into some fields. Some are more feasible on real midday sunny situations, and others in dusk or dawn, and other in interior exterior ones.

I. Work with the environment

Be creative. Blowing up the background or using silhouettes is one way to do it. I must add that a high contrast image can be "a usable" one, so keep doing them.

56
What is tone mapping? How does it relate to HDR?
12
How to photograph a snowy landscape?
7
Double exposure photo with Gimp
3
How to adjust exposure for both the sky and the landscape?

19
How much contrast should I have?
4
How to set exposure for photographing a high-contrast subject?
7
Can telephoto lenses cause the background to be darker than the foreground in the same light?
17
How can I use a histogram to expose correctly when the scene is very dark?
3
Does contrast affect dynamic range?
9
How to deal with large exposure shifts during time lapse?
3
How can I bump up shadows in post without overexposing the image?
11
Why are my sky photographs coming out dark?
10
Why is the earth not overexposed in this star photo from the ISS?