How do I find the right whitebalance for a night cityscape?

There are a number of articles on the net saying how to properly set WB for night shots. Specifically for cityscapes. For example, one of them says to use fixed Kelvin values like 2500 for nice blue and 10000 for awesome orange. I don't get it. It's usually impossible to set manual WB using a gray card or even a white object in a frame due to extremely mixed light and/or distance. Plus the sun is below the horizon so Kelvin values cannot be applied at all even in blue hour.

How do you deal with the situation?

Would you fix WB of this image (taken with Canon 5D in raw, WB set to auto)? How? 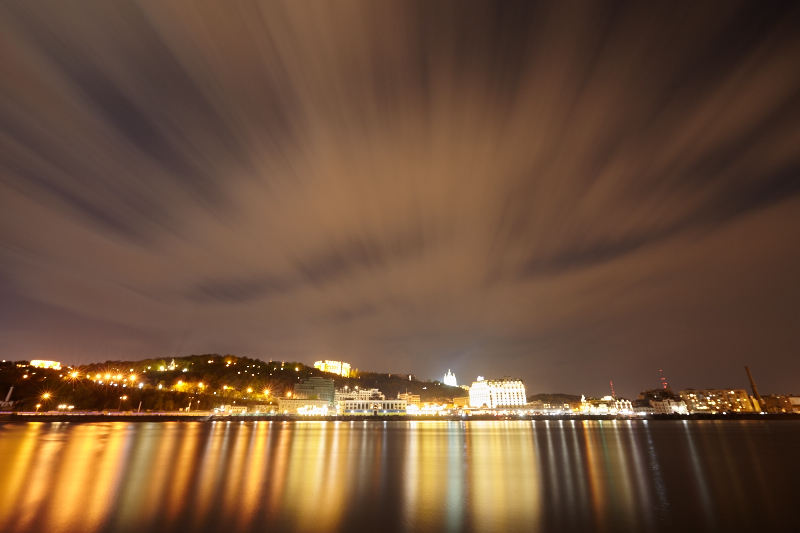 You're not going to get "color accurate" white balance at night. There's no way to make every object in the scene look the same color it would be if viewed under full spectrum daylight. This is because night scenes typically have a myriad of varying light sources in them. Those various sources are all different temperatures and have different amounts of the visible spectrum in them. This is then compounded by the fact that various objects reflect different colored lights differently. Two objects that look the same color under full spectrum daylight may demonstrate two disparate colors when illuminated under less ideal lighting. Conversely two objects that have significantly different color under good lighting may look the same color under very narrow spectrum light such as the light emitted by the sodium vapor lamps used for many streetlights. This is what is referred to as metamerism and metameric failure.

So there is no "correct" color balance for most night scenes, particularly for cityscapes with multiple light sources. Instead, there is artistic interpretation that you can apply to raw files in the editing process. Since sodium vapor lamps are usually centered at around 2700K, I've found that to be a good starting point for cityscapes if that is the prevalent source of light in the scene. If there are other lights, particularly colored lights, illuminating a particular building then I might try to center the color temperature to render those lights as close as possible to what I saw when viewing them with my own eyes. You can then fine tune the rest of the scene using tint (magenta-green axis) as well as selective color with the HSL control.

Shoot raw (if the camera can do that) and find the best WB setting with your image software.

Not the answer you're looking for? Browse other questions tagged white-balance night cityscape or ask your own question.

10
What *exactly* is white balance?

27
How to take great night shots with a subject in the foreground and a cityscape behind?
35
How to white-balance photos shot in mixed-lighting environments?
4
What's the best way to take cityscape photos on a night boat cruise?
8
What settings do I need to take a night cityscape with blue sky like Eric Rolph?
1
How can I get very vivid colors in night cityscape pictures?
3
How to illuminate an outdoor night time portrait with a cityscape background?
4
How is this high-key, bright cityscape effect achieved?
20
Do photographers see ambiguity in the color of the blue/black (gold/white) dress?
2
How do I find the right white balance value to set in my camera?
5
How to keep right color temperature if I edit photos with night light mode turned on?