How can I increase the sharpness for shots like this water droplet image? 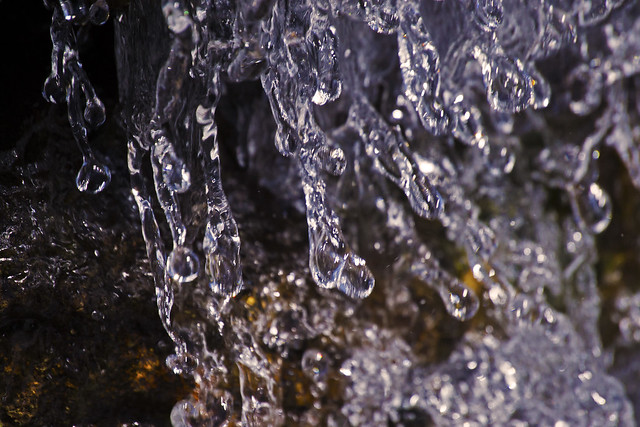 One more to go with the excellent tips from others - what's the ISO? Higher ISOs generally result in less fine detail and so a softer overall image, and 1/4000 @ f/8 is letting in very little light. If you can get away with letting in more light, say by opening up to f/5.6, that should let you lower the ISO to a level that'll increase sharpness.

It seems that the focus is shifted backwards. This contributes to unsharpness of main object. You should focus more carefully.

Also, you may use even bigger F-number when resolution drop caused by diffraction is not critical.

It looks like the magnification of the falling water is quite high. This means that the water moves very fast relative to the frame. My guess is that it took only around 1/20 of a second for a droplet to move through the entire frame. This means that even with a shutter speed of 1/4000, a droplet traverses 1/200 of the frame during the exposure, which manifests itself as motion blur.

One possible solution consists of reducing the magnification by moving further away or by using a shorter focal length. This means that the water moves more slowly relative to the frame so that there will be less blur given the same shutter speed.

Another possible solution would be to use a flash. The duration of a flash can be as short as 1/25000 of a second, making it much easier to freeze movement. Note that using a long shutter speed like 1/200 of a second should not be a problem as long as most of the light in the exposure comes from the flash, rather than from ambient light. Of course, this may be hard to achieve when you are outside and cannot control the ambient light, since a stronger flash usually also means longer flash duration.

You should be able to use a higher f-stop (and higher ISO to balance out the darkness, if it isn't a problem).

Switch to live view when shooting, zoom in, then switch to manual focus and adjust the the focus by yourself. This should prevent any problem arising from the auto focus.

Not the answer you're looking for? Browse other questions tagged sharpness water or ask your own question.