I want to use the spot meter but in addition the completely automatic auto focus mode with a Nikon DSLR camera. Is there a way to make the spot meter position visible? I see it in "group mode" and "single sensor" mode since it is identical to the focus sensor. But I want to see it for the "auto" mode as well. Nikon says it is the position in the center that is relevant for spot-metering, but it is difficult to meter if one does not see this sensor.

Short Answer: No, I do not believe you can force the camera's spot metering point (which is the focusing array's central focus point, proved below) to become visible while spot metering and using the auto-area AF mode.

To find out more about how I came to this conclusion, continue reading.

Long Answer: I was recently wondering how spot metering worked with auto-area AF as well. According to page 139 of the D750 manual, available here, I came to the same conclusion as you: when using auto-area AF, the camera will spot meter off of the center focus point of the entire focusing array. In Nikon's words:

Spot: Camera meters circle 4 mm (0.16 in.) in diameter (approximately 1.5% of frame). Circle is centered on current focus point, making it possible to meter off-center subjects (if non-CPU lens is used or if auto-area AF is in effect, camera will meter center focus point). Ensures that subject will be correctly exposed, even when background is much brighter or darker.

That last section in parentheses is what we're interested in here. To test my hypothesis/understanding of this passage I took the test shots below.

In this first image I tested to see how the camera metered a shot while using auto-area AF and spot metering. To check this, I made sure to place the camera's center focusing point in the shadow cast by the horizontally positioned pillow, and allowed auto-area AF to focus on the on the horizontal pillow. If the camera is indeed metering off the array's center focus point as I suspect, then the image should come out over exposed, since it is attempting to meter the deep shadow. If instead it is metering off of the center of the focus point group which the camera has selected, then the horizontal pillow should be relatively properly exposed. 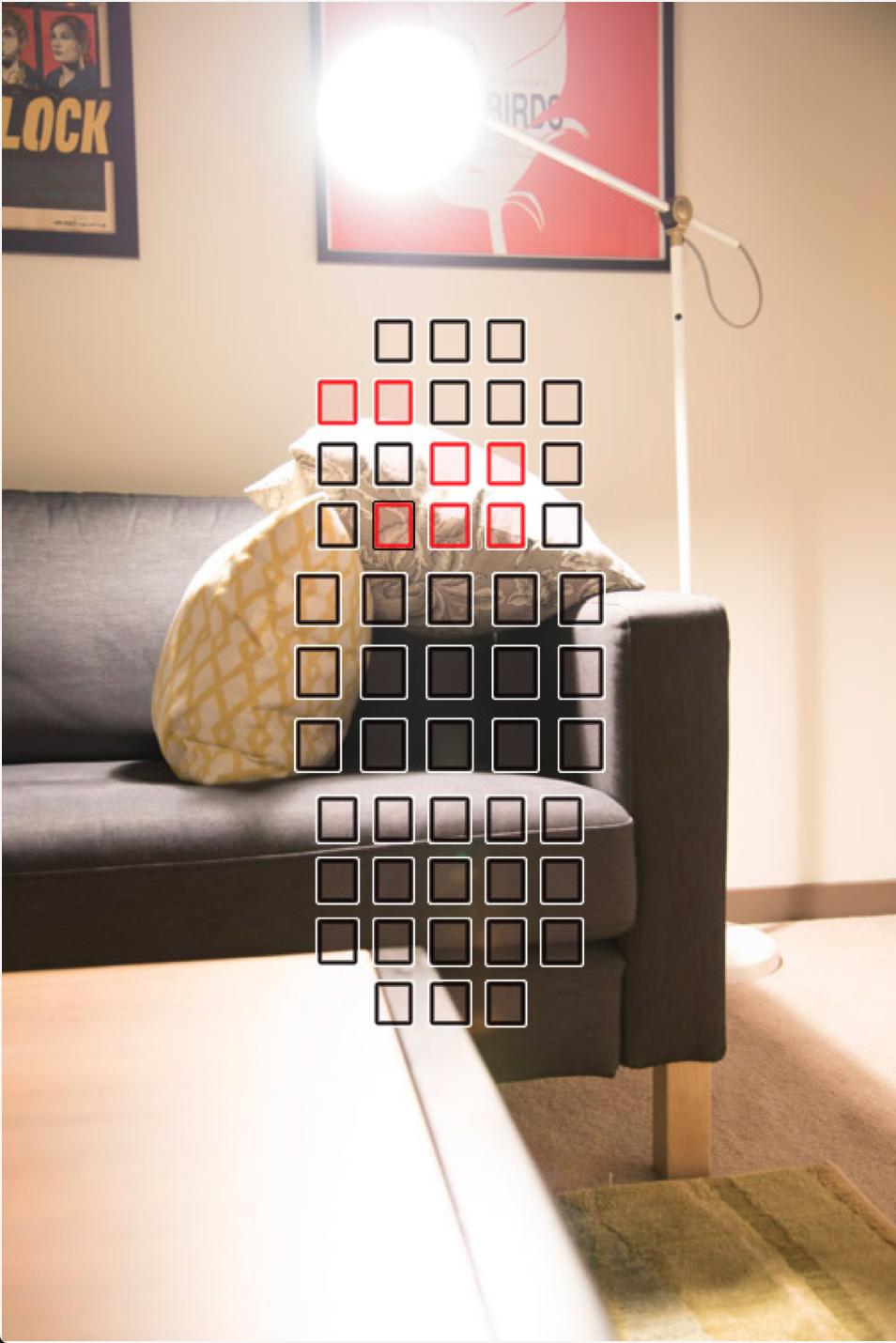 As you can see from the overexposure in the above image, it appears that the camera is indeed using the entire array's central focus point to perform its metering. To confirm this though, let's see what happens if we change to single-point AF and place that focus point on what would be considered the center AF point of the group of AF points that auto-area AF selected to see how the camera chooses to meter the shot this time. 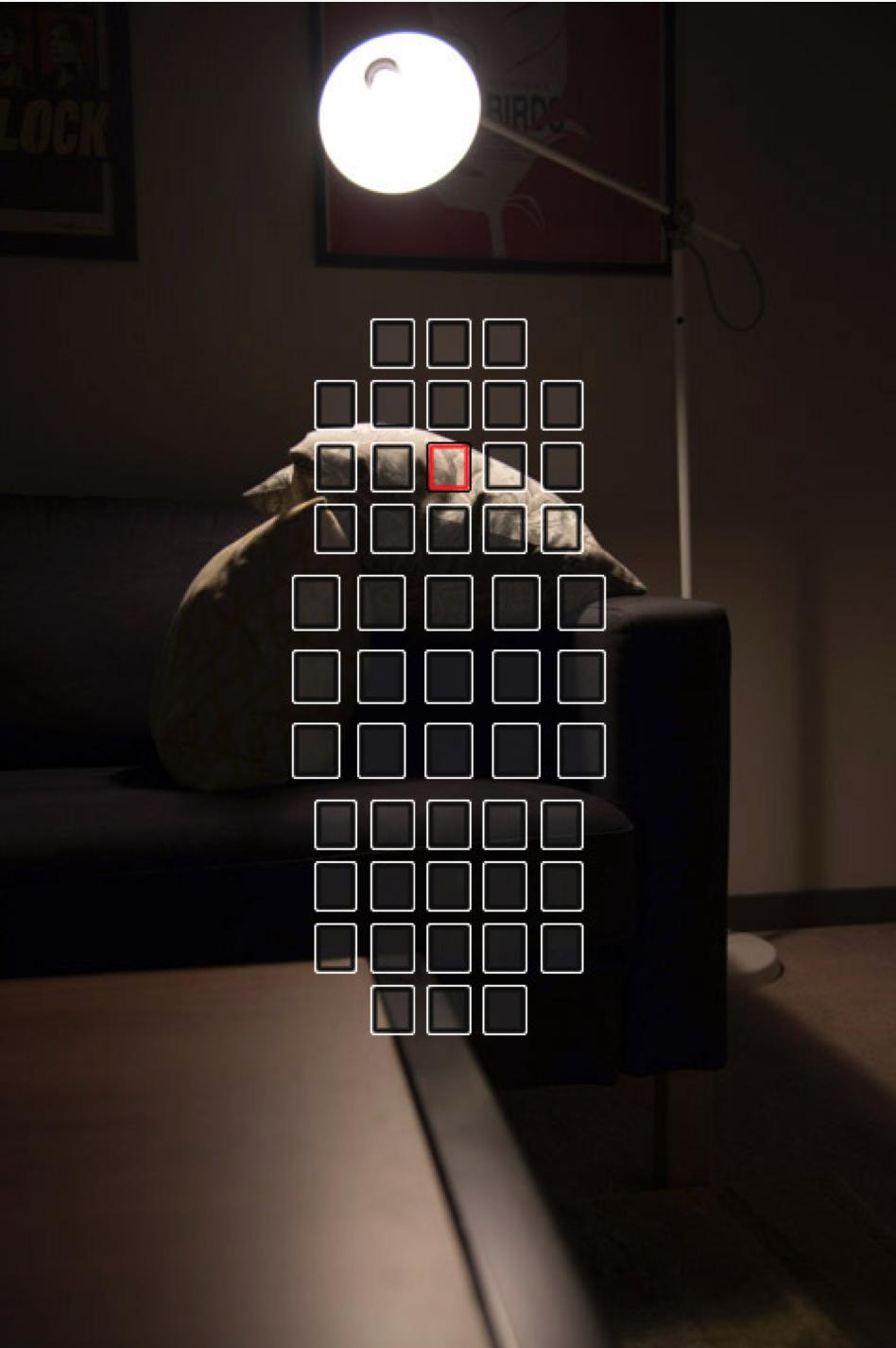 That image looks much more properly exposed for the area under the focus point, so I feel good that our interpretation of the manual is correct. To get back to the question at hand though, can we force the camera to show us the central AF point while using auto-area AF?

I would be really interested in finding out if there is some setting I have missed that would allow this functionality though.

Spot: Camera meters circle 3.5 mm (0.14 in.) in diameter (approximately 2.5% of frame). Circle is centered on current focus point, making it possible to meter off-center subjects (if non-CPU lens is used or if auto-area AF is in effect, camera will meter center focus point). Ensures that subject will be correctly exposed, even when background is much brighter or darker.

So with spot metering and auto AF, your camera will select the best AF point and use it. It should normally show you this point in the viewfinder, as you can read on Nikon Area-Mode AF page :

The area of the frame that the camera will use for autofocus is shown by focus points in the viewfinder.

So you might have an issue, which origin may be one of those given on this page :

Not the answer you're looking for? Browse other questions tagged nikon dslr spot-metering or ask your own question.

16
When to use a particular auto-focus mode
8
Does spot/partial metering always assume 18%?
20
How do I "focus and recompose" using spot metering?
5
How do I keep my Nikon D5100 from attempting to autofocus with every shutter press?
4
Why does my Nikon D3100 not fire the shutter in autofocus mode?
2
Tips for proper exposure using center-weighted metering
1
Can spot metering at the focus point be enabled on the Olympus PEN-F?
2
Why is the subject too dark when using auto modes on Nikon D5600?