How do they make the sun or moon appear so big in backgrounds of some images? 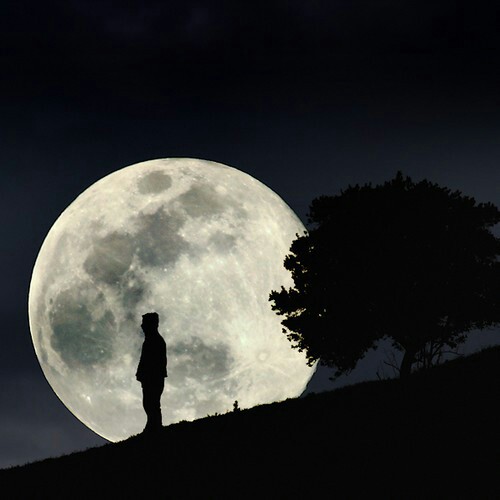 As per Era's link in the comments above, photographers have been fooling people with trick photography for over a hundred years now, and your included photo is a classic example.
If you see a photo that doesn't seem quite right for any reason, it probably isn't.

It is entirely possible to create a larger-than-life image background like this in camera by using a very long lens and taking advantage of the tele compression effect. To do this, you need your foreground subject (the person and tree in this case) to be just the right distance from the camera so that their relative size compared to the background (moon) is what you want. The formula for the camera-subject distance depends on the focal length of the lens, but the constant factor is the moon - it will always be the same size in the frame, since you can't get (significantly) closer or further from it.

EDIT: Speaking of being fooled, I was mistaken in my initial answer; upon closer inspection this image does indeed appear to be taken in camera, as opposed to being collaged later.

... however, your example image appears to use the common technique of collaging two or more images to achieve much the same effect. In this case an image of the moon has apparently had a silohuetted image of a man and tree superimposed in front of it, probably using Photoshop or a similar editor.

How do I know this? I don't, but if you spend enough time editing digital photos you can sometimes see the telltale signs of manipulation. In this case the two things that strike me as unlikely to be natural are:

These observations are not a criticism, and for all we know the silhouette could be a complete fantasy - drawn by hand. In which case, kudos to the photographer; this is a great image.

Not the answer you're looking for? Browse other questions tagged astrophotography shooting-technique moon sun or ask your own question.

11
What filters are commonly used in photographing the moon with a DSLR at night without a telescope?
4
Can taking photo of the moon and/or stars at night cause damage to the camera sensor?
8
How can I capture earthshine?
14
What exposure was used for successful pictures of the “blood moon”?
10
How can I achieve more clarity in my photos of the moon?
5
Is there an app that shows location-specific times of sunrise, while considering line-of-sight obstructions, such as terrain?
3
Why the difference between sunny f/16 rule and looney f/11 rule?
5
How does one actually *use* a dark frame?
0
lunar photos with telescope