Ask Question
Asked 5 years, 9 months ago
Active 3 years ago
Viewed 2k times
1
Closed. This question is opinion-based. It is not currently accepting answers.

I am still building my lens collection and am looking for something of a walk-around lens, I'd also like it to double as something fairly fast for low light. Sharpness is key for this one. Because of this my first thought was a prime lens, generally build quality is very important to me so the 50mm f/1.8 "nifty 50" is out. I also prefer EF glass, so I don't have to reacquire my lenses again when/if I decide to go full sized.

I like the light weight and small size of the 40mm but the 50mm should about mimic an 85mm portrait lens on my APS-C camera.

None of these lenses are going to approach L series lenses in terms of build quality and the ability to take punishment and just keep working as they should. There are reasons they offer near the same optical quality at 1/5 to 1/15 the price of an "L" prime lens.

I've had an EF 50mm f/1.8 II "nifty fifty" since 1997 or so and it still works fine for what it is. I used it quite a bit for about the first decade or so I owned it. Most of the "falling apart" stories are from folks who didn't take proper care to protect it from damage or try to force manual focus when the AF motor is connected to the focus ring. That being said, it is more fragile than most of its counterparts. But treated properly it is a perfectly usable AF lens.

Where it falls short is in the usability of the manual focus. There is no true focus ring, you must turn the very front of the barrel to manually focus it, and care must be taken lest your fingers wind up in the field of view! Since it does not have Full Time Manual Focus, one must also be sure to slide the AF/M to M (for Manual) before moving the focus ring manually. Attempting to force the ring to move when the AF motor is engaged can damage the gearing or the focus motor, even when the lens is not mounted on a camera. There are plenty of warnings regarding this in the documentation supplied with the lens.

I use an EF 50mm f/1.4 a lot now. In addition to the wider maximum aperture, it offers Full Time Manual Focus and has a usable AF ring. It is a much better lens, in my opinion, than the EF 50mm f/1.8 II. Better build quality, a faster, quieter, more precise micro-USM focus motor, a truly usable manual focus ring, and better bokeh from the 8 blade aperture (compared to the harsh bokeh from the 5 bladed f/1.8 at any aperture other than wide open) are some of the reasons why I recommend the EF 50mm f/1.4 over the f/1.8 II. I own both of them. I carried the f/1.8 version around in my bag for many years and used it somewhat frequently. Since upgrading to the f/1.4 I have found I pull it out more often due to the increased usability of the faster focus and the usable manual focus ring. The known mechanical weakness of the focus collar can be well managed by remembering to park the focus setting at ∞ when not actively shooting with the lens. When the barrel of the focus mechanism is fully retracted in that position it is not subject to the deformation that a drop or hard bump can do to it when the focusing barrel is extended. If the focus collar helicoids do get bent, it is a fairly easy fix for the DIY type.

Having said all of that, if I were looking for an economical 50mm prime today I would carefully consider the new EF 50mm f/1.8 STM. It is just as good optically as the f/1.4 and f/1.8 II. A lot of the build quality and usability problems of the f/1.8 II have been well addressed by the design of the F/1.8 STM. It sells for a fraction of the price of the f/1.4. The one thing that might be a downside for some users is the way the manual focusing ring works with all STM lenses. The focusing of the lens, even when manually focusing, is strictly fly-by-wire. Turning the focus ring on the barrel of the lens does nothing mechanically to move the focus elements of the lens. Instead, an electrical signal is sent to the camera body which in turn sends a command to the focus motor in the lens to move. This limits the smallest increment of focus adjustment to one "step" of the stepping motor in the lens. It also eliminates the ability to focus the lens when using "dumb" extension tubes or freelensing. You can't move the focus elements to park them when the lens is not attached to a powered up EOS camera body either.

We all see things differently. People who complain online are likely to outweigh the people who write to tell you how happy they are. In that case, just be aware that complaints are far more frequent and can distort the real picture significantly.

'Walk around' is a term that suggests you want a lens that you would prefer to keep attached to your camera for the majority of the time. Traditionally, such a lens would encompass a moderately wide-angled view such as 35mm or 24mm on a full frame (35mm) camera. The idea is that the camera and lens would be always ready to capture whatever scene appeared in front of the photographer. The derivation of terms such as 'ever-ready case' shows that a camera was always ready to capture the scene.

Taking your choice of 50mm lens (and the 1.6 crop factor) you would be limiting yourself to a field of view which approximates to 80mm and that lens would be more suitable as a short telephoto on your cropped sensor. The 40mm lens would be nearer to a 64mm field of view; so not quite a walk around focal length either.

As for liking good build quality, especially where you intend to keep the lens and use it at a later date, Canon 'L' lenses are known for their build quality. The new STM 50mm lens is not one with which I am familiar and you may find that it suits your purposes very well. The 'L' lens would be the 50mm f/1.2 but it costs! Around £1,149 in the UK and $1,449 in the US. What it will not be at any time is light in weight.

Canon do make a 24mm f/2.8 EF-S lens which is very light, inexpensive and has gathered some good reviews.It does not fit the EF mount. It would give you a 38.4mm field of view and may be far more suitable to consider as a lens for walking around. £1700 uk pounds would get you a Canon 24mm f/1.4L which you would be able to transfer to an EF mount and it is built like a tank.

Thereafter you will be looking at zoom lenses or the 20mm f/2.8 lens. 'Walk around' lenses tend to mean wide-angle so that you will have great depth of field and capture as much of the subject material as possible. You may find that your cropped sensor 50mm and 40mm lenses do not include enough subject matter and are not as easy to guarantee adequate depth of field or sufficient subject matter captured.

Well the 40mm is a better focal length for walk around in my opinion, however if you are into portrait then the 50mm is certainly more flattering and it's a tad bit sharper and faster.

Then step up to the EF 50mm f/1.4 USM. At $350, it costs more than the f/1.8 that I think you're referring to above but is better built and a little faster. This is a great lens that'll open your eyes to the advantages that prime lenses bring to the table. The wide aperture makes portraits with very shallow depth of field possible, which I like, but wide open it can actually be too shallow -- it's easy to be just a little off with the focus, so you have to be careful. I have plenty of photos of sharp noses and blurry eyes. This isn't really a problem -- just stop down a little bit when close up, or take your time and be careful.

The EF 40mm f/2.8 is a little slower, about half the price of the 50 f/1.4, and closer to "normal" on your crop-sensor camera. It's also very compact. I have the EF 50 f/1.4, but I've been thinking about buying the 40mm lens (for a full-frame camera) just because it'd be very easy to carry in a pocket. You won't get the very shallow depth of field of the 50mm f/1.4, but that might make the lens seem easier to use.

I don't think you'll go too far wrong if you go with your gut and pick the one that appeals to you most right now. They're both good lenses, either will be useful additions to your kit, and it wouldn't be terrible to eventually own both. Personally, I'd lean toward the 50mm f/1.4 for it's large aperture, which makes it stand out more from your kit lens.

I also prefer EF glass, so I don't have to reacquire my lenses again when/if I decide to go full sized.

In this case it doesn't matter much -- the only prime EF-S lenses I can think of are the 24mm pancake lens and the 60mm macro lens. Both seem like nice lenses, but not what you seem to be looking for here.

If you are considering a Canon 50mm lens, you should really consider the new EF 50mm 1.8 STM as it is much much better than the old plastic mount EF 50mm 1.8 II.

It is so much better that I would even recommend it over the 50mm 1.4 USM. The USM motor on that lens has a terrible record for premature AF failure. 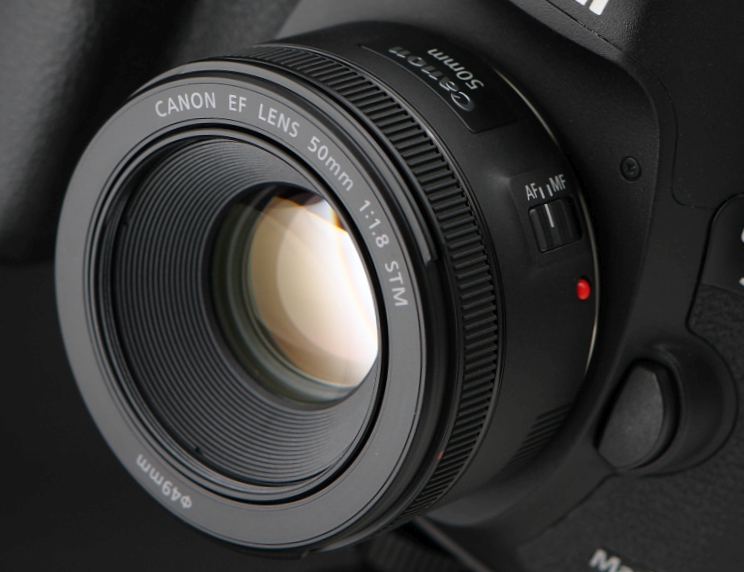 I shoot street with 35mm film, and 35 focal length is my go to, although 28 is also a good perspective. For your sensor size, I don't think a 40 = ~58 ? would be a good choice. I think you should be looking for a 24 full frame or 35 APS to get you some depth of field, and some decent coverage in close quarters. Horses for course, though. Just my two cents.

Not the answer you're looking for? Browse other questions tagged low-light sharpness prime full-frame lens-recommendation or ask your own question.

5
Reducing my gear list after moving from Canon APS-C to FF
6
Would it be better to use a 35mm prime instead of a 50mm prime on a cropped sensor body?
1
Will a 14mm f/2.8 prime be useful for nearby action shots?
0
What kind of lens do I need to get more of the scene into the frame?
2
How fast can you shoot your normal (50mm equivalent) lens handheld, and without optical image stabilization?
11
How do I choose a lens for a "glow in the dark" indoor/lowlight event?