I am looking for a prime lens to pick up, and I'm wondering if there is any difference between 35mm and 50mm in terms of the end product if I just stand back more with the 50mm. I use the Sony a6000 and am looking at the SEL50F18 and SEL35F18.

I understand that something like a fish eye lens will give a different effect, but is that what is going on in 35 vs 50mm? Or is 50mm effectively just taking a 35mm and cropping the center out (but with increased quality)?

If you shoot from the same position with both lenses, then taking the 35mm lens and cropping it to the same angle of view of the 50mm lens will give you pretty much the same picture, other than the differences in optical quality between the two lenses and the resolution lost to cropping.

Here's an extreme example of the effect differences in shooting distance have when using different focal lengths to get the same framing from different distances. The change in perspective is due to the change in shooting distance and the different distance ratios between the various elements in the scene and the camera as the camera moves forward and back to preserve framing of the subject at various focal lengths.

A couple of explanations based on comments:

"will give you pretty much the same picture" -- What about the depth of field?

If you shoot from the same distance and use the same aperture with two different focal lengths you will have a difference in the depth of field. But by cropping the image from the wider angle lens you increase the magnification factor of the cropped image to view both images at the same display size. Remember, increasing the magnification also reduces the DoF.

Isn't the apparent distance between the foreground and background dependent on the focal length, even if you shoot from the same position and crop?

The proof is in the pudding – the focal lengths are not exactly the same as yours, but the differences are obvious... 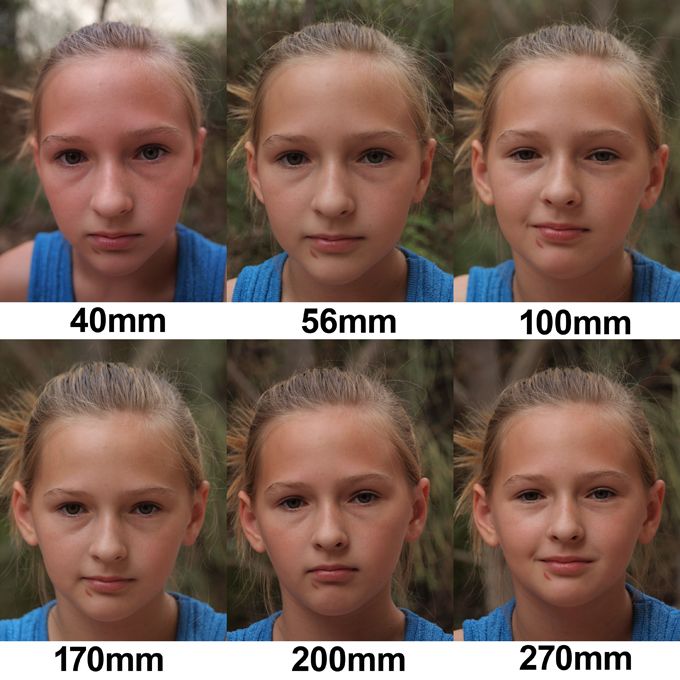 Thanks to my schwifty skills in Inkscape, the rotation here is slightly off but the following shows exactly what you're comparing. These are the fields of view of a Nikon 35mm (inner) and a Nikon 50mm (outer). 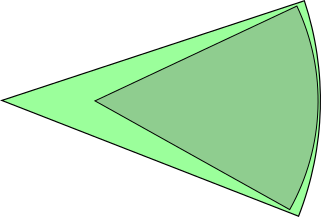 So even when you're getting approximately the same stuff in the frame, the 35mm is much wider, focal distances are slightly different too. If you're really close to something with a really fast lens, wide open, that could make a difference.

You can crop, but you'd have to stand in the same spot as the 50mm: 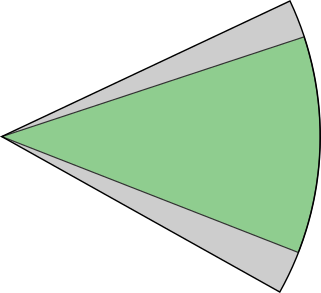 The difference between shots really come down to the mechanics of the lenses. speed, focal properties, bokeh quality, distortion etc. They won't be exactly the same.

Do you have a selection of lenses (or a zoom lens) now?

Shoot a table-top test with different focal lengths, repositining the camera to get tye same view of the foreground object. Then look carefully at the photos to see for yourself.

If you're one of those peopke where this doesn't just scream at you, it's good to develop your eye to seeing the perspective.

For example, my wife takes still-life photos of food, and I say "too close! Back up!" and had to teach her to use the numbers (e.g. don't use a focal length shorter than 40), as she doesn't "see" the perspective when framing the shot. Even if she can "see" it in the final picture on a full-size screen, it's too late.

In particular, the background (table and room beyond) becomes a sweeping expanse that dominates the composition, or even looks unnatural.

The other day, my Mom showed draft/concept of product shots she wanted, and knew that they didn't look good but didn't know why. I explained "because you were too close." The bottles looked fatter on top and thinner at the base, because the distance was different and that distance was significant compared to the individual distances.

A person's face will look bad if you shoot from closer than you would normally view a face. Percepually, you actually need a longer lens to look best because you view a photo as if seeing someone on stage or otherwise at a distance, beyond a normal personal conversation distance. So portrait lenses are longer again than the "normal" lens below which it simply looks bad.

I have an Alpha 6000 as you do, and use it for social events including getting pictures taken with people at an event, parties and gatherings, etc.

In real real situations, I still have a bit of a chore getting far enough away to frame a shot. The pictures look good. The 50mm would be too long, making it difficult to back up enough.

On the other hand, for portraits (close up to show just the face) the flatter perspective of the 50mm would look better, all else being equal. But I think that's not the primary use for an ultra-portable camera. (Note that the 35mm is a normal perspective and ok enough for such shots, and great for anything that shows more than just the head. You can avoid crowding in and shoot the head-only by cropping the result, as you hace 25 megapixels to start with!)

So unless you have something completely different in mind, get the 35mm. Also lookmat renting first if you are not sure.

The technical points basically boil down to three points

Since you need to get closer to the object using the 35mm lens, you are at least theoretically able to see more details. However, this is (a) only a small difference and (b) may be limited by by other factors like the sensor of the camera.

Due to you being closer to the Object, the perspective is different (as already stated above).

With both lenses having a similar quality and price tag, the actual choice should be made rather on your personal photography habits, e.g.:

So in my opinion neither of the two lenses is better than the other, but only better suited to your personal needs (at this time)

In traditional miniature format photography (35mm... which equals an image dimension of 24 x 36mm) a 35mm lens was regarded as a moderate wide-angle lens. A 50mm lens was regarded as a 'standard' lens. The standard lens had an angle of view of around 46 degrees which approximated to that of normal human vision. That meant that when a photographer used a standard lens on a 35mm format image frame, the resulting image looked like the usual perspective which humans were used to. There was a time when every 35mm camera was supplied from new with a standard 50mm lens. The standard lens was relatively 'fast' (large aperture) and the thoughtful manufacturers used it as an advert and an entry point into the rest of the SLR camera system so it was frequently very sharp.

The angle of view of a moderate wide angle lens (35mm) on a 35mm image format which we now call full frame, is around 62 degrees. If the photographer captured an image from the exact same spot with both of the lenses discussed, the wide angle lens would include more of the scene and the subject matter would appear smaller. In addition to this effect, the front to back sharpness of the scene would appear as greater in the wide-angle view than the standard view. This is because if all things are equal between two different lenses then focal length will affect the range of available sharpness in the image. This is known as depth of field (how much of the image is acceptably sharp from front to back) and the longer the focal length is (50mm is longer than 35mm) the less sharpness in the image from front to back.

One can compensate to some degree by stopping down the 50mm lens more than the 35mm lens. Using the wide-angle lens at its widest aperture and using the standard lens at its optimum aperture of say f/4.0 to around f/5.6 but it depends on its maximum aperture. An f/1.2 or 1.4 lens could reach its sharpest aperture at f/4.0 while an f/2.0 lens may not get to its maximum sharpness until f/5.6. Additionally one could close the aperture to around f/11.0 to get maximum front to back sharpness in the image before it became limited by diffraction as the aperture closes beyond any useful maximum.

Answering your first question: Standing back with the 50mm lens would include more of the subject matter (making it smaller in the image frame) and increasing front to back sharpness for any given aperture.

Answering your second question: The shorter focal length vs the longer one... The shorter focal length includes more of the subject matter in the available image frame, making the subject smaller and therefore further away from the lens, which in turn increases the depth of field. Wide-angle views display far more sharpness across all of the planes of the image. In digital photography, if you have enough pixels to start with, you can take the centre of a wide-angle image and enlarge it to emulate a telephoto shot. You cannot emulate a wide-angle shot by taking a portion of a telephoto image. A fisheye view is an uncorrected wide-angle image with an extreme angle of view. The 6mm Nikkor could see behind itself with an angle of view of 220 degrees. One could not take a piece out of a telephoto shot to duplicate this behaviour.

Not the answer you're looking for? Browse other questions tagged lens focal-length sensor-size perspective subject-distance or ask your own question.

2
Is there a difference between increasing focal length vs. cropping?
1
Does say a 35mm on an APS-C camera have the same facial/other deformations as a 35mm?
0
Choose between 35mm and 50mm for Nikon D5500
-1
What is the purpose of wide lenses?
0
Why does the chair and the grandpa look bigger and inflated?
0
Zoom or Approaching
42
What does it really mean that telephoto lenses "flatten" scenes?
18
Are all kit lenses poor? (And if so, why?)
8
Is an entry level DSLR going to shoot nice portrait pictures?
7
Is it possible to change depth of field in RAW images?
See more linked questions

15
Can I use my APS-C kit lens as a reference for choosing between 50mm or 35mm prime lenses?
4
35mm prime lens on a Nikon D50
7
Is the difference between a good 50mm vs 85mm lens just your distance from the subject?
5
What DX Nikon lenses should I look at for concert/club photography?
4
50mm and 100mm macro lenses difference at the minimum focus distance?
0
Why does Sony say that a 35mm lens is "35mm equivalent when used with an APS-C camera?"
1
What do each of these lenses do with my Sony a6000?
0
What kind of lens do I need to buy to create a fish eye effect?