What is HDR photography?

What is HDR photography, and when might it be useful?

HDR (High Dynamic Range) can be called a technique where you take multiple shots at multiple exposures and combine them to get a perfectly exposed picture with best possible details. Its best applicable where the scene contrast is the most. For example, if you're taking a picture of the sky (bright) through the window of a dark room (dark), you have two options:

So, the workaround is, you turn on exposure bracketing (-2, 0, +2) of your camera, set the metering to evaluative and take 3 shots (continuous mode, self timer 2 second) of the scene from some steady place (tripod if possible).

Now if you use Photomatix or any similar software to merge these 3 shots into one, with minor adjustments you can get detailed sky as well as details window/room as well. 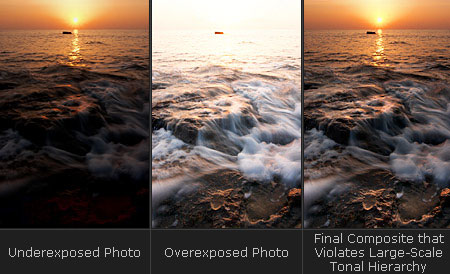 Here you can take a look at some amazing HDR photographs. http://www.stuckincustoms.com/hdr-photography/

Also, this is a great tutorial for the beginners: http://www.cambridgeincolour.com/tutorials/high-dynamic-range.htm

HDR is also known as High Dynamic Range. Usually it involves taking multiple pictures and combining them together, to increase the dynamic range of the camera. Specifically, a typical work flow is as follows:

For more information on making HDR images, see this question.

HDR as it is commonly used today is only one form of High Dynamic Range Imaging (HDRI) that has been going on since at least the 1850s. Gustave Le Gray took multiple exposures at different exposure values to create seascapes that used the bright sky from one negative and the darker sea and shore from another.

The tone mapping performed in the darkroom in the mid-20th century was raised to an art form by Ansel Adams and others as they dodged and burned prints to lower the total dynamic range of a scene to what the photo papers they were using were capable of displaying.

In the realm of digital photography there are multiple techniques used to depict a scene with a High Dynamic Range using a medium, such as a computer monitor or print, that is not capable of as great a contrast between the brightest and darkest parts of a scene as the scene itself contains. What many people mean when they say HDR is only one such technique among many.

Though far from the only legitimate one, the most common understanding today of the term HDR is what evolved from ideas first introduced in 1993 that resulted in a mathematical theory of differently exposed pictures of the same subject matter published in 1995 by Steve Mann and Rosalind Picard. It makes a high-dynamic-range light map from multiple digital images exposed at different values using only global image operations (across the entire image). The result is often a 32-bit floating point 'image' that no monitor or printer is capable of rendering. It must then be tone mapped by reducing overall contrast while preserving local contrast to fit into the dynamic range of the display medium. This often leads to artifacts in the transitions between areas of high luminance values and areas of low luminance values. (Even when you open a 12-bit or 14-bit 'raw' file in your photo application on the computer, what you see on the screen is an 8-bit rendering of the demosaiced raw file, not the actual monochromatic Bayer-filtered 14-bit file. As you change the settings and sliders the 'raw' data is remapped and rendered again in 8 bits per color channel).

In the broadest use of the terms HDR (or HDRI), other processes that do not involve 32-bit luminance maps and the necessity of tone mapping are also included. Combining different areas of different exposures of the same scene, whether via a physical 'cut & paste' as Le Gray did over 150 years ago or via modern digital imaging applications that use layers, is one way. Other techniques, such as Exposure Fusion or Digital Blending digitally perform global adjustments in a way that doesn't require the same type of tone mapping that a 32-bit floating point image does. As mentioned earlier, many of the techniques used in the darkroom to produce prints from exposed film in the 20th century were a means of displaying scenes with a very wide dynamic range using photographic paper that had the capability of a lower dynamic range than the negative film used to capture the scene. Even converting a 14-bit raw file, where the data for each pixel only has a luminance value but no real colors, and using demosaicing algorithms to interpolate an 8-bit per color channel red, green, and blue color value for each pixel based on the different luminance values of adjacent pixels that are filtered using a Bayer mask with alternating patterns of red, green, and blue can be considered HDRI, especially when non-linear tone curves are applied to the resulting RGB values.

56
What is tone mapping? How does it relate to HDR?
22
What is dynamic range and how is it important in photography?
11
How to improve sky's saturation and contrast to get a similar result?
31
How does exposure fusion work?
15
What does it mean when a TV "supports HDR"?
8
how to make a grey warehouse exterior interesting
5
How did John Cheng create his photograph of Simone Biles at the FIG Gymnastics World Championships?
5
How to capture a small red light?
11
How to choose the correct exposure?
9
How to capture the sun rays falling inside a forest?
See more linked questions

7
What are the downsides to using iPhone for HDR?
56
What is tone mapping? How does it relate to HDR?
6
What are the free HDR programs available for download?
47
HDR then Panorama, or Panorama then HDR?
3
How to take faster HDR shots with a Nikon D7000?
7
Is HDR more important on a phone camera than a standalone camera?
11
What's the difference between "Fake HDR" and real, bracketed exposure HDR?