What is dynamic range and how is it important in photography?

Wikipedia says that the dynamic range is the "ratio between the largest and smallest possible values of a changeable quantity". Ok, I get that. I suppose that's why HDR photos have a "high dynamic range" with respect to light.

But what else is there to it? What's the dynamic range of a camera? Just tell me everything that's important about it :-).

Okay this may be very out of scale, but it's my best guess as a simple demonstration of light intensities. Also, the capabilities of the sensors might be less or more. But you'll get the idea. 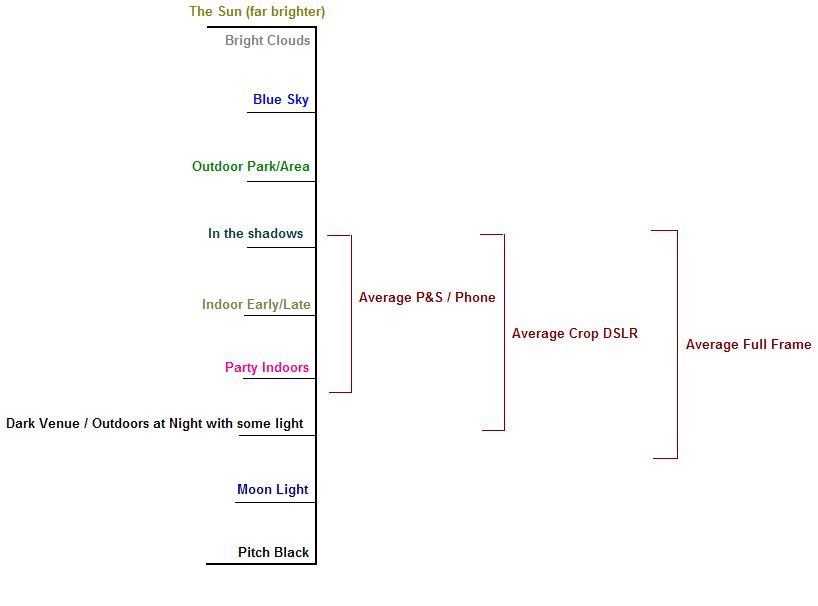 The reason why dynamic range is so important is because it defines precisely how much of a scene can actually be represented within the bounds of the image's "black" and "white". The image above represents a very rough scale of how bright typical items in a scene are, whilst the 'brackets' on the right give a rough indication of how much of those intensities can be seen in detail at a given exposure. The shorter the exposure the higher your bracket goes (small exposure for bright clouds), the longer the exposure the lower it goes (longer for shadowed/night scenes).

Of course in real life there really isn't a black and white. Black would be the complete absence of light and white would an infinitely large amount of white light in all frequencies. But when it comes to photographing and vision, you're not working with such a high dynamic range.

The difference? If you expose a point and shoot to have the same white clipping point within the scene's light intensity, the point where black occurs may be brighter than the blacks in a digital SLR's image. This is because the much larger sensor is able to capture a greater variation in intensity of light. It's white point is brighter and it's black point is darker than the point and shoot. It sounds as if you understand this part.

Why is it important? What happens when you wish to see both the bright clouds in a scene but also the dark shadow areas inside the house through the back door? In most cases either the clouds will turn out bright white and you won't be able to see any detail, or the inside of the house will simply be black (or very close). For the camera it falls out of the current range of intensities you're exposing for.

This is one of the shortcomings of photography in relation to the performance of the eye. The human eye is typically able to see a far greater range of intensities than a camera, typically around 18 to 20 stops of intensity variation. We can see in the house and the bright clouds but the camera can only expose for one or the other. Most DSLR sensors can capture around 10-13 stops of dynamic range.

Furthermore, the format the image is captured in (for digital photography) can allow for a significant amount of the dynamic range to be retained when converting the image into a usable JPEG, as it is the most common "final" format a photo ends up in.

With a JPEG, the format that a point and shoot will typically generate for you, each component of red, green and blue can only store 8 bits of accuracy. Black is 0, white is 255. This means there are 256 "steps" between black and white. Conversely, with high accuracy raw capture, these are typically capturing 12 to 14 bits of information. For 12-bit raw, black is still 0, but white is 4,096. In 14-bit capture, the white point is 16,384. What this means is that the variations in intensity are captured orders of magnitude more accurately. There are now up to 16,384 "steps" between the image's black and white points.

Even though you typically end up exporting to this 8-bit JPEG format, this allows the photographer before hand to adjust exposure, fill light and recover blown highlights far more accurately than if it was attempted with the final JPEG image. Not only can this allow you to "save" photos from the bin, it can also vastly improve the result you get out of well captured photos. One technique exploiting this is Expose to the Right.

Furthermore #2: I think the biggest thing to note in relation to digital dynamic range is that for a given ISO setting, the SNR in a full frame sensor will be far greater than a point and shoot. At the same exposure, the "big bucket" photo sites in a full frame sensor allow more light to still fit into the range of the sensor. So +13 EV will still be registered whereas on a point and shoot it would simply be pure white, for example.

It's like having a 1L tin to capture water instead of a 500mL tin in a point and shoot.

Furthermore #3 (with added photos): Here is an example of just how limited some sensors can be.

This is what my iPhone produced. The first I exposed for the dark area down on the street. The second is exposed for the bright buildings and the third is a "HDR" image produced by the iPhone. With some tweaking the shadow area can be made to approximate the dynamic range of what I actually saw, though it's still limited.

Clearly the dynamic range is too limited in the iPhone to capture all information you need at once. At one end, the whites just completely blow out and at the other, the shadows are almost completely black.

The second is that of your camera. I'm going to explain this in terms of a digital camera, because it's a bit easier to understand, but the same concepts apply in film cameras.

In order to explain, let me first explain something about digital cameras. Digital cameras record information as a number. Most cameras capture that information in a number from 0-255, so that the number can be stored in a byte (8 bits). Higher end cameras will have 10, 12, 14, or even 16 bits, and there are rumors of some magnificent cameras with 24 bits per color channel. Dynamic range then is the range from the dimmest non-zero value to the highest non-saturated value, or for an 8 bit camera, 1-254. (I should add that technically the dynamic range is the value of the max non-saturated intensity over the lowest detectable intensity. This comes into play more if the sensor is non-linear, which can happen)

Why is all of this important? A good photograph will match the dynamic range of the scene and of the camera. There is some room for creativity, but there is still this rule of thumb. A few additional points to keep in mind.

To help illustrate this, I'm going to include a few pictures. 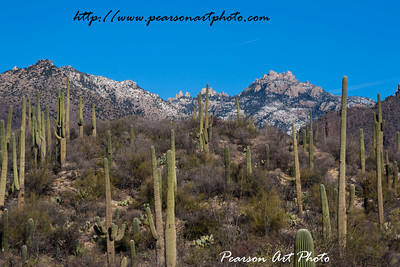 This picture has a low dynamic range. Most of the objects are about the same brightness, and it tends to have a dull look. 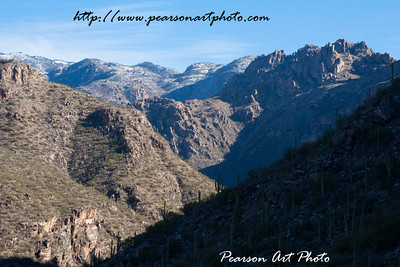 This photo has a better dynamic range. There is still some detail visible in the shadow, but there aren't any highlights being clipped. 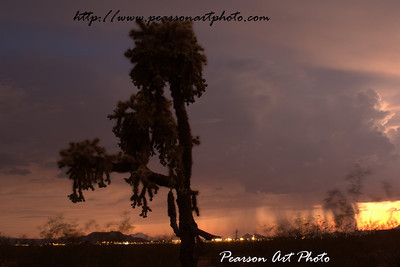 This image has such a large dynamic range that it's difficult to get the whole scene captured by my 8 bit camera. Note that the ground isn't lite at all, and it's really hard to see any detail in the cactus. It's hard to tell, but the red channel is actually saturated here, and there is little to no detail in the shadow regions. Still, I used my artistic choice to keep the sky in the range of the camera, and let the cactus be more of a silhouette.

Dynamic range, as Wiki states, is the range of values that can be captured and this not a fixed value across all cameras. DxOMark is an organization that, amongst some other things, measures the dynamic range of various camera sensors and they define it as: "A numerical value describing the ratio between the highest and lowest luminance values that can be accurately measured on a sensor." As you can see from the site, the range for cameras is quite wide from the low end to the high.

What this means, from a photography perspective, is that the greater the dynamic range of the camera, the more information you can capture, especially as colour and tonal ranges transition through the image. For example, the effect of this is that one camera may miss subtle shades of red while another captures that, providing information that would otherwise be missed. That gives you a lot of flexability in post-production conversion to JPEG or, even better, potentially improved prints if you work with software and a printer that can handle the range.

It also has a practical effect on dealing with exposure. I've posted my article on the Pentax K-5 exposure range before, but I'll link it again because it's relevant to the question and the K-5 currently holds the dynamic range crown. This gives you a sense of the detail that may actually be in the image.

Anyways, this could be a treatise, it's a large topic, but the nutshells are covered. :)

There are already some good technical answers here. In terms of impact on photography though, the simple answer is that dynamic range is the reason exposure exists.

That is, exposure is the photographer's way of showing a slice of dynamic range and therefore to choose which range of brightness values is important to his photograph, just like composition lets you choose what to include and exclude in an image.

In photography, dynamic range is the relative difference in brightness between the lightest and the darkest detail that can be captured in a single photo.

Unlike LCD screens where dynamic range is expressed as a (increasingly meaningless) ratio like 500:1, in photography it's expressed in stops, where each stop represents a doubling of the original (pre-gamma-corrected) light intensity.

Most digital sensors have at least 8EV (8 stops) of dynamic range which is plenty, and roughly equal to slide film. For the most part it's not worth obsessing over dynamic range when comparing cameras these days. Dynamic range is a technical measurement but since it's measuring the pre-gamma-corrected values it may be misleading as to the visible effect it may have on your image. Beyond a certain point you simply won't see any difference as any further range is lost in the very darkest (or with highlight compression, lightest) values your monitor/printer can reproduce. That extra practically-invisible range can be useful, however, when you want to selectively boost or cut (burn/dodge) brightness in areas or recover from heavy over/underexposure.

Note that different camera review places measure dynamic range differently - and I don't trust DxOMark's measurements at all - I think they used flawed methods (interestingly I find DPreview's measurements more reflective of reality). Technically, the dynamic range should be measured from the highest values that can be represented down to the lowest values that aren't obscured by noise. The noise is important:

Not the answer you're looking for?Browse other questions tagged terminology dynamic-range or ask your own question.

12
What is white or black “clipping”, and how does one avoid it?
17
Why does a bigger sensor have better dynamic range?
10
What does IQ mean?
18
What is HDR photography?
11
How to choose the correct exposure?
10
How can I expose a waterfall scene correctly?
0
How can I calculate the dynamic range from a photo?
1
How can I extend skies in virtual tours and 360 tours?
1
D3100 vs D3200 Image Quality both set to 12MP
0
Advice needed for purchasing a new camera or/and lens
see more linked questions…