Why do people care about vignetting or distortion?

On every lens review there is distortion (on wide angle ones) and amount of vignetting mentioned. I would like to know why, when it is so easy to edit in post processing.

There are three major considerations that make lenses with less distortion, vignetting, or any other "correctable" aberrations more desirable for many photographers than correcting later in post.

While it is true that you can use postprocessing applications to correct for distortion, vignetting, and other aberrations, doing so takes time. While this might not be much of a consideration for a casual amateur that processes a relatively low number of images, it can be the difference between success and failure for a working professional on tight deadlines and the need to spend as much time as possible promoting their business and actually shooting with clients - things that generate revenue - rather than spending time in front of a computer editing photos.

Correcting for distortion remaps and interpolates the RGB values for pixels. This can have a measurable effect on the absolute acutance of the image. Roger Cicala, the founder and primary lens guru at lensrentals.com, has written an insightful blog entry on this topic. A similar thing happens with correction for vignetting. Boosting the brightness of the edges and corners of an image also boosts the noise in those areas by the same proportions. This is especially critical if the images are intended for any kind of post processing that increases local contrast, such as HDR or other types of tone mapping. 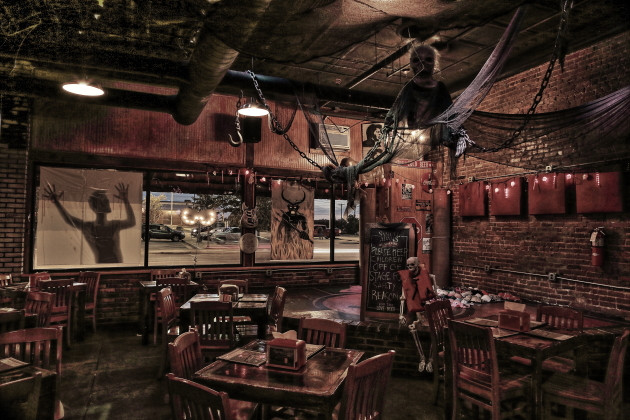 Pay particular attention to the corners. Not only is the noise amplified noticeably, but the colors are affected as well, as is the sharpness. The image was taken using a Canon 5D Mark II and an EF 24-70mm f/2.8 L lens at ISO 1250, f/8, 0.5 sec.

The possibility of any post processing depends on the context. I often shoot events and sports where the images must be delivered within a few minutes after shooting, usually by a runner while I'm shooting the next group on a different card. The turnaround time on such jobs pretty much precludes any post processing. The vast majority of your sales are going to come from parents as they're leaving the venue a few minutes after the group their child was in competed or performed. If the images you just shot of that group aren't cycling on the monitors in your sales booth as they are leaving, you're not going to sell much of anything.

Consider also many photojournalists, who are now required by their clients (wire services, national/international publications, etc.) to shoot only jpeg files. Reuters now requires all contractors to do jpeg processing in camera at the time the image is shot. No images saved as raw files and processed later are acceptable. So unless you have a camera that can do distortion, vignetting, and CA correction in camera (a few can, but doing so slows those cameras down significantly) you are stuck with what you get from the lens or are forced to destructively apply the correction to a jpeg.

On the other hand, if these considerations aren't applicable to a particular photographer, then a lot of money can be saved using lower quality lenses and correcting it in post.

Are the time constraints really noticeable, even for working professionals? You can have Lightroom, for example, apply lens corrections upon import, and so any photo that goes into Lightroom—which, for many people, is all of them—gets these corrections applied with no effort.

When you apply lens correction upon import in LR it either slows down the import process (depending on import settings) to generate a new preview jpeg for every image or it only adds an instruction to the file to do so the first time each file is opened, which means it takes that much longer to open each file. It's not a noticeable issue with 5 image files. It can be a significant issue with 50 files, and a deal breaker with 500 files.

There are times where lens profiles are either not available or not ideal for a particular shot and need to be tweaked (see point #2 above). That sometimes takes considerable time to get right. This is especially true with zoom lenses which have constantly changing characteristics as the focal length changes. Most lens profiles don't include a separate correction for every focal length, and even if they did many lenses don't report every focal length, but round everything to the nearest 5mm. So you could be at 83mm on one shot and 87mm on the next and the profile for 85mm might be applied to both.

The really good lens profiles, such as those used by the Digital Lens Optimizer in Canon's Digital Photo Professional do take quite a bit of time to apply, not to mention they double the size of an original raw file by appending the corrected raw data to the original file without replacing the original data. I've got an 8 core, 4Ghz processor, 16Gb of fast ram, etc. and it takes my machine a couple of minutes to apply a single DLO profile to a raw file. The results are amazing, as even moderate diffraction can be corrected, but it is time consuming.

Those have completely different impact.

Vignetting is a darkening of the corners or edges which depends on aperture and focal-length. In order to correct this in software, pixels around the edge must be gradually lightened in proportion to the light fall off:

Distortion is a different beast with much more variations. There is barrel, pincushion and other more complex distortion which often varies by focal-length but sometimes by focus-distance too.

Process has a time cost regardless. It requires either manual interaction which each image or accurate lens profiles to be maintained. Despite the large number of profiles which exist, a large number of lenses are left out.

For the above reasons, you may have noticed that cameras commonly correct automatically for vignetting by default but rarely for distortion, particularly DSLRs where the image shot can appear differently framed after distortion correction when compared to the view in the viewfinder.

Not the answer you're looking for? Browse other questions tagged post-processing distortion vignetting or ask your own question.