How can I take portraits where more DoF appears in front of the subject than behind?

This photo has been processed, of course. More importantly, it seems that DoF is more on the front of the subject than on the rear side. What type of post-processing and lens is suitable for producing such an image? Any suggestions? 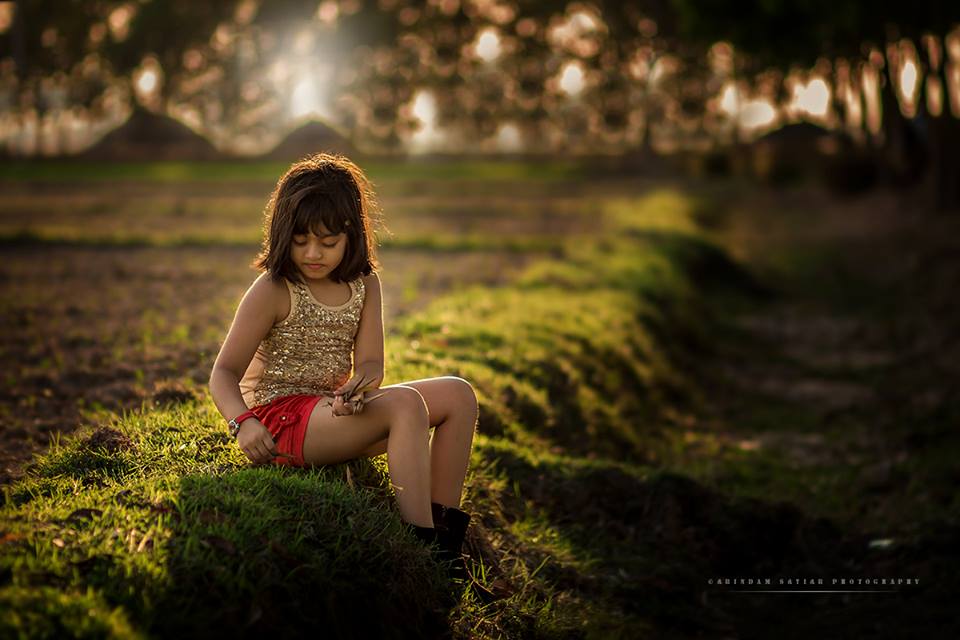 Depth of field is a complicated topic. For background, you might want to review What exactly determines depth of field? and Technically, why is the out of focus area blurred more when using a bigger aperture?.

The key thing is that there's really only one plane which is perfectly in focus, and then a range — the depth — spreading out from that. Depending on practical limits in your system (pixel size and more), it's often the case that there's an amount of this depth which is indistinguishably sharp from that theoretically perfect plane. Then, outside of that, there's a gradual fading away, and what exactly is considered within acceptable focus depends on more and more parameters, many of them subjective — print size, how close you're looking, how good your eyesight is, what the subject matter actually is, how picky you are, and so on.

As a rule of thumb, this acceptable depth of field is generally biased towards the rear of the actual focus distance — about two thirds behind and one third in front. This is just a rule of thumb — if you're focused on something close, it becomes more balanced, and as you focus further away, it's likely that everything from your focus point to infinity is effectively in focus, making only the forward depth of field relevant.

So, to your specific question: if you're focusing on a close subject and want to ensure that the focus even more to the front than the rear, pull your focus in so you're "front focusing" rather than focusing on the subject directly. In doing this, especially if your depth of field is shallow, be aware that the focus on your subject itself won't be perfect. But, depending on the viewing conditions and intentions, that might be fine.

Alternately — and in think this is the case in your example — in many situations, there's just a lot more scene behind the subject than there is foreground. Here, I don't think the depth of field really extends much more (if at all) to the foreground. It just seems balanced that way because the frame is dominated by the expanse of the out-of-focus background.

You ask specifically about lenses and post-processing. The answer for post-processing is simple: nothing in particular, as this is basically an in-the-field decision (at least until computational photography becomes commonplace and effective). The one thing you might do is crop out extra foreground to increase the apparent effect.

And for lenses, it's again "nothing special", although it's probable that this was taken with a lens with a rather wide maximum aperture. See How can I get dramatic shallow DOF with a kit lens? for more on getting blurred backgrounds with a low-cost kit lens.

All that is needed is to focus closer. There are depth-of-field calculators which will give you the front and rear limit of acceptable focus for a certain focal-length and aperture when the image is printed or viewed at a certain size.

Once you have that information, it is only a matter of focusing such that the subject falls within the depth-of-field but closer to the rear limit.

There is only one plane that in in focus. For more on what DoF is and what it is not, please see DoF app: should I round the image format/width up or down?

There are a few ways that you can cheat a little, though.

One is to compose the scene in such a way that there is nothing visible the frame occupying much of the DoF distance closer than the subject. In other words, make your subject the closest thing visible in the scene other than anything that is even closer to the camera than the near limits of the DoF.

Another way is to use a Perspective Control/Tilt & Shift lens. By using the tilt function you can manipulate the plane that is in focus to no longer be parallel to the image sensor/film plane. If you place your subject near the left of the frame and tilt (swing) your lens to the right, the point of focus will be closer to the camera in the center, and even closer to the camera on the right, than it is in the left where you are focused on your subject. The DoF will also follow the angle of the plane of focus. It appears this technique may have been used in the example included in the question. You can also tilt your lens down so that the plane of focus will be closer in the bottom of the frame than in the top of the frame. Some PC/TS lenses require you to use tilt only along the 4 cardinal axes (up, down, left, right) but many will allow you to rotate the tilt movement with respect to the camera so that you can tilt in any direction.

For more about Perspective Control/Tilt & Shift lenses please see:
How does a tilt-shift lens work, and why does it solve certain problems?
https://en.wikipedia.org/wiki/Scheimpflug_principle
https://en.wikipedia.org/wiki/Perspective_control_lens
http://www.the-digital-picture.com/Reviews/Canon-TS-E-24mm-f-3.5-L-II-Tilt-Shift-Lens-Review.aspx (Scroll down to the section headed by The TS-E Dance where a thorough demonstration is made using multiple example photos, accessed by mousing over the descriptions, of the capabilites of the various movements of a tilt/shift lens including how combining various tilt movements and shift movements at varying angles relative to one another affect the resulting image.)

The DoF is a range around the focus plane, and you can position it explicitly to get (or avoid) a specific effect. In this shot, the focus point was put probably at the hands of the subject, and the aperture was wide open, so the background gets blurred.

The larger the aperture, the larger is the depth of focus - and the less you see the effect of above picture. Shooting the same shot with 32 would probably give a pretty sharp background.

Lenses with manual focus & depth of field scales make this zone focusing technique quite easy to do. Without the scales, its quite hit or miss if you don't have a precise measurement of your subject distance & a DoF calculator- you end up doing it the way Itai & Michael describe.

Using the DoF scale on the lens and based on the aperture used, you can tell just how far you can front shift the focus to have the zone of maximum sharpness fall off just behind the subject.

45
How can I get dramatic shallow DOF with a kit lens?
69
What exactly determines depth of field?
36
Technically, why is the out of focus area blurred more when using a bigger aperture?
14
How does a tilt-shift lens work, and why does it solve certain problems?
8
Can the method from the paper "High-Quality Computational Imaging Through Simple Lenses" compete with conventional lenses?
2
DoF app: should I round the image format/width up or down?

0
does depth of field travel with the focal plane?
3
How to disassemble a lens assembly?
15
How can a super tiny iPhone 6 Plus lens produce significant DOF?
3
Why do viewing conditions affect Depth of Field?
1
Are all prime lenses designed so that the same DoF scale applies at any focusing distance? If so, why?
1
Which modern lens can achieve this kind of depth of field?
1
Is there any mirrorless camera that can mark areas within DoF in the EVF?
0
How to set focus when subject is more than one object?
8
How can I get sharp bird photos when the bird is further away?