Can the Nik Collection be used without Photoshop or Lightroom?

So the Nik Collection is now available to download free of charge from Google. But can it be used standalone, ie without buying Photoshop or Lightroom?

I know they are usually described as 'plugins' or 'filters' for Photoshop etc, but can it be used on its own (on Windows)? Or can it be used along with other (free) software, eg GIMP or RawTherapee?

Would it actually be useful as standalone software? Is there any limitations to doing this.

Yes they can, but there are some significant caveats. Although they can be run alone, the plugins were not designed to be used as a standalone application.

You can drag multiple files and drop them on the Nik executable file and it will open with all of them loaded but only one visible. You can navigate from one to the next using the forward and back arrows but there is no way to view all of them in thumbnails.

Other than HDR Efex Pro 2 there are no menus in the top left corner! Proceed With Caution! Anytime you hit the Save button near the bottom of the window your original files that you dragged and dropped into the Nik module's executable file will be overwritten!!! It's a very good idea to make backup copies of your originals and use them instead!

Anytime you hit Save the changes will be written to the original file and then the window will close. To work on another file you will need to drag another file and drop it on the executable file. If you loaded multiple images you can work on each of them and then press the Save All button at the bottom and all of the files will be overwritten with the changes and then the window will close. Once again, if you have loaded multiple files and made any adjustments to them, when the Save All button is pressed all of them will be overwritten, not just the one currently displayed in the window.

The HDR Efex Pro Module does have a few menu options and you can open it in a stand alone window and load images using the "File --> Open Exposure series" command. You can also "Save As" (create a new file with the changes) or "Save" (overwrite the original file) in the HDR Efex Pro module.

With Nikon's Capture NX-D application you can also use the "Open with" option to have Capture NX-D generate a Tiff file with your current edits to an .nef file and send it to the Nik apps.

If you use Gimp, you could use ShellOut plugin to export it.

The script given above is for 32-bit. For 64 bit the folder structure is different.

Photoshop plugins are written to fit an API published by Adobe, so it is possible for other applications to expose/use that same API.

Also, Nik include a rudimentary frontend (with a few more options for HDR Efex Pro) and the executables can be launched directly. Michael's answer has more detail on how to do it and it is a very 'awkward' and potentially destructive workflow to put it mildly.

There are instructions on how to use Photoshop plugins in GIMP if you search. But bear in mind that Gimp 2.8 (the current version) is some time away from 16-bit/channel support and when released is likely to be problematic with things like plugins. None of the packages support a fully non-destructive editing behaviour features which Photoshop offers (like smart objects which allow users to go back and adjust settings easily).

It's a similar story with Paint.Net which only had 8-bit support last I checked.

I couldn't find an API or instructions for RawTherapee at all which suggest it's probably not possible to integrate directly today.

Capture NX-D does seem to offer some workflow advantages (by converting raw content to 16-bit tiff and making it available to the Nik plugins) but it's still a world away from the way Nik intended them to be used.

TL;DR - You can in theory, but in practice doing so is likely to yield poor quality output, not straightforward and arguably pointless for any reasonable volumes of work.

They can run stand-alone. They accept command line parameter pointing to a file you want to edit. You can also drag&drop photo files onto the plugin executables.

The HDR Efex Pro 2 has a unique behaviour in that it saves result in 'My Pictures' folder under the original file's name with a "_HDR" prefix. The other plugins save changes directly over the original file, which is why it is wise to make a working copy beforehand.

Also Viveza 2 has a unique feature in that it works properly with PNG files. Other plugins all open PNG files for me, but do not save them.

Alternatively you can use a small GUI utility for working with Nik plugins on WIndows and on Linux (under wine): https://nik4nix.sourceforge.io

The program is free and open-source. It creates working copy automatically when you open a file, it handless the different behavior of HDR Efex Pro 2 (decribed above) automatically, and it helps you to manage versions of your file when you move from applying one effect to another and between plugins. 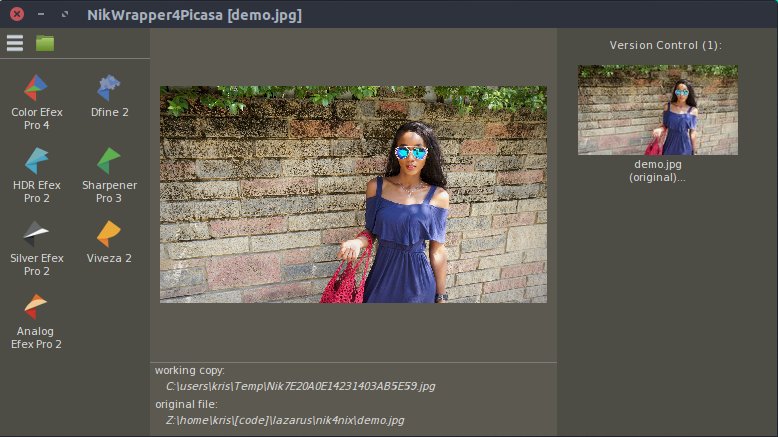 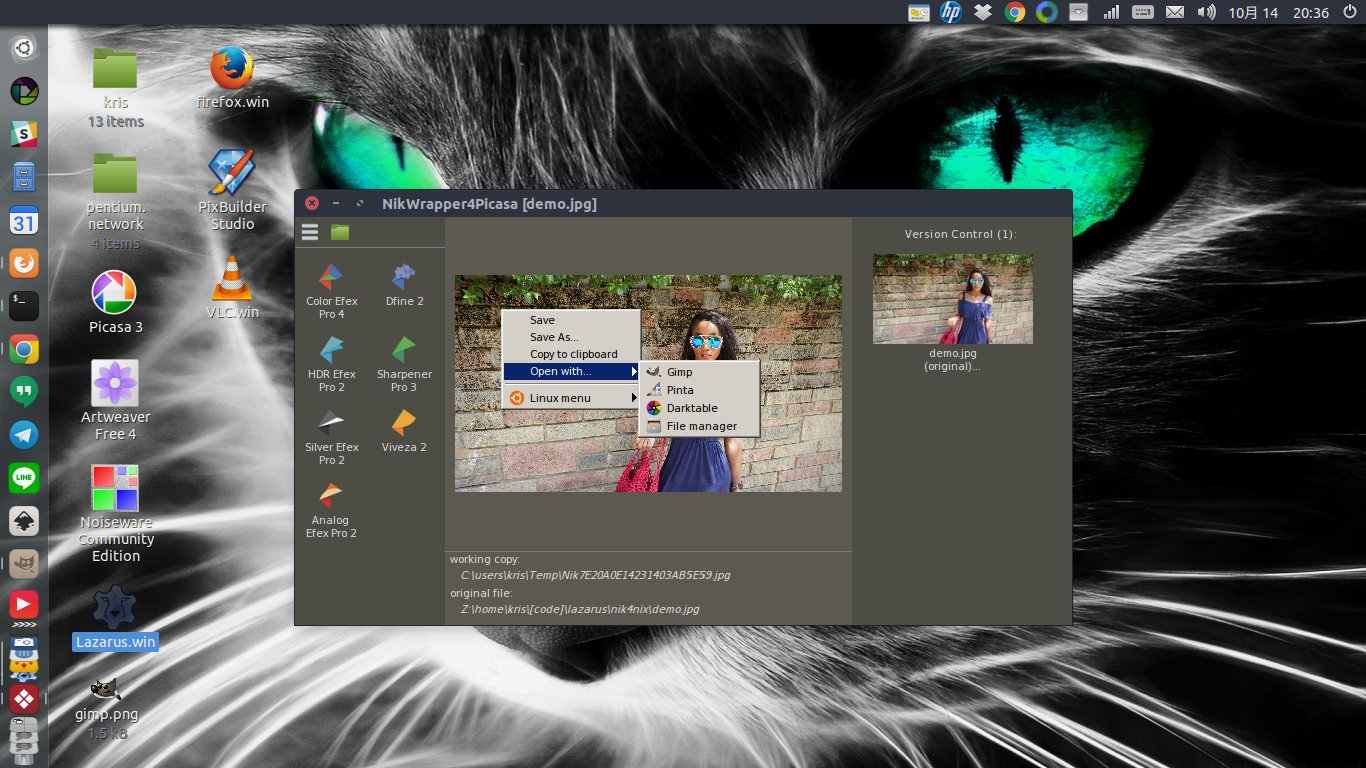 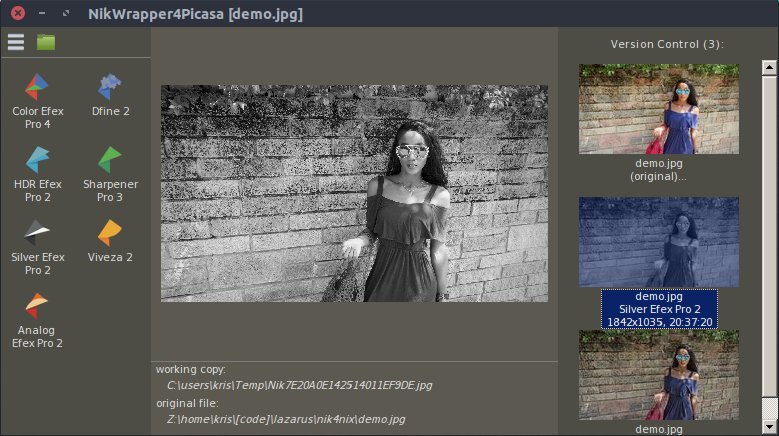 Not the answer you're looking for? Browse other questions tagged software windows nik-software or ask your own question.

2
What is the correct workflow for Nik collection (with free tools only)
1
Where Does Nik HDR Efex Pro 2 Save?

16
Cheap/free tool to view/convert Canon CR2 RAW format photo files on Windows?
31
Can anyone recommend a good open-source photo management platforms for power users?
2
Editing RAW files with LR, Photoshop and Nik Software
5
Is there any Linux software that can import picasa.ini edits?
2
What is the correct workflow for Nik collection (with free tools only)
0
How do I open and edit a RAW image from a board-mounted CMOS sensor?