Why isn't my DSLR focusing accurately on a fast-moving subject?

Here is a photo I took earlier today: 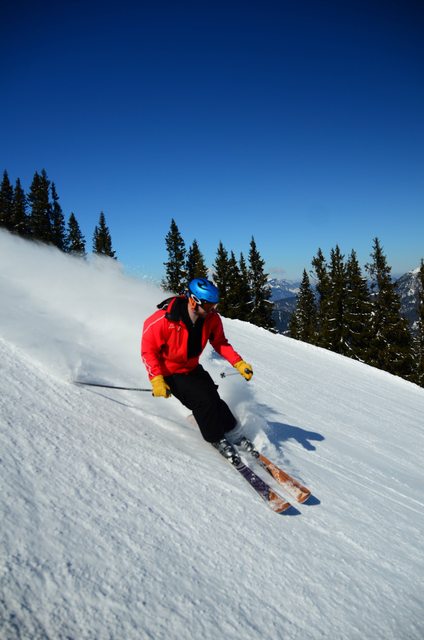 I did my best to track him down the hill and fire off as many shots as I could. Some turned out fine and in focus but the better ones like this one didn't.

Some of the potential issues with my settings/execution could be:

Where do you think I am going wrong?

Phase Detection Autofocus (PDAF) performance is a complex combination of various factors. For you and your camera to nail focus all of these factors must be working together. If any single factor isn't set correctly, can't do the job, or doesn't work as it should, the entire system will miss focus to one degree or another.

No AF system is perfect. Even the best systems in the world, such as that found in the Canon 1D X, will not nail every frame every time. What the best systems do is allow the user to customize the parameters of the AF system to match the conditions and subject matter being photographed. This allows a higher "keeper" rate. But even the best shooters with the best cameras and the best lenses will not have a 100% keeper rate from an AF perspective when shooting action/sports.

In terms of hardware, the lens is just as important as the AF system on the camera. All other things being equal, a faster lens (one with a wider maximum aperture) should perform better at AF than a comparable slower lens. This is because of the way PDAF systems use light rays entering the lens on each side to measure the distance to an object. The wider the baseline, the more accurate a PDAF system can be. Note than even when a smaller aperture is selected, the camera focuses with the aperture wide open. The lens is only stopped down during the instant before the shutter begins to open.

A sharper lens will perform better in terms of AF speed and accuracy than a lens that is astigmatic or otherwise softer. This is because better acutance provides more contrast for the PDAF array to work with.

The speed of the focus motor in the lens is also a concern, especially when shooting sports and action. It doesn't matter how accurate an AF system is or how sharp the lens is if it focuses so slow on a moving target that the target is somewhere else by the time the lens has focused on where the target was when the distance was measured.

The most sophisticated AF systems use predictive analysis, with varying degrees of success, to guess where the subject will be by the time the shutter actually opens. These systems are usually highly configurable by the user to adjust things such as tracking speed, the type of motion expected by the subject (consistent speed in one direction, erratic movement at different speeds, etc.), the amount of time to wait before reacting to another object that passes in front of the original subject, etc. With a camera such as the D7000 you have the ability to set some of these parameters while other choices are programmed in at a medium value that can't be altered by the user.

With the D7000 the best way to shoot a skier moving towards and then past you is to set the following:

The camera will begin tracking whatever is at the selected focus point when you initiate AF by half-pressing the shutter.^ It will then follow that object (based in part on the object's color) as it moves around the frame. The camera will not release the shutter until it has confirmed AF has been achieved if custom function a1 has been set to focus. It will react as fast as possible to changes in speed and direction with custom setting a3 set to off.

Use a smaller aperture to get a larger depth of field and give yourself a little more room for error. Even just going from f/3.5 to f/4 at 18mm would probably give you about an extra 10 feet of depth of field so that small focusing errors aren't a problem. You can easily compensate with ISO so that you don't have to drop the shutter speed.

Try using "zone" or similar mode as opposed to single point. Check your particular model's manual for the nitty gritty. Contrary to previous comment, you can set a single point of focus to the center of the frame, but you can also move it to another "focus point". Cross-type focus points are more accurate than vertical type. The total number of focus points determines speed and the relative number of cross-type focus points determines accuracy. The camera may sometimes fire without acquiring focus, or your shutter speed may be too slow allowing some blur (not the same as out of focus).

Not the answer you're looking for? Browse other questions tagged autofocus nikon-d7000 sports or ask your own question.

15
Why does my camera hesitate when shooting?
7
What does the AE/AF lock button do that half-pressing the shutter doesn't?
9
How do I diagnose the source of focus problem in a camera?
3
What is AF-L needed for?
0
Why do my studio shoots usually end up fuzzy?

4
Why does my Nikon D90 autofocus not work in rapid succession?
3
Where is Canon 1100D autofocussing in low light low contrast conditions?
1
How to troubleshoot a Nikon D5100 that will not autofocus at all?
1
Shooting lacrosse with Nikon 55-200mm question
1
TTL seems not to work on D7000 with sigma ring flash for dental photography
2
Is it normal for phase-detect autofocus to be inaccurate with a Canon EOS 750D and EF-S 18-55mm lens?
0
What camera settings should I use for ice hockey?
2
Telephoto lens will autofocus but not shoot
3
Why isn't a Sigma HSM lens autofocusing with my Nikon D5600 — is there a compatibility problem?