How might Mario Testino have lit this Kate Moss photo? 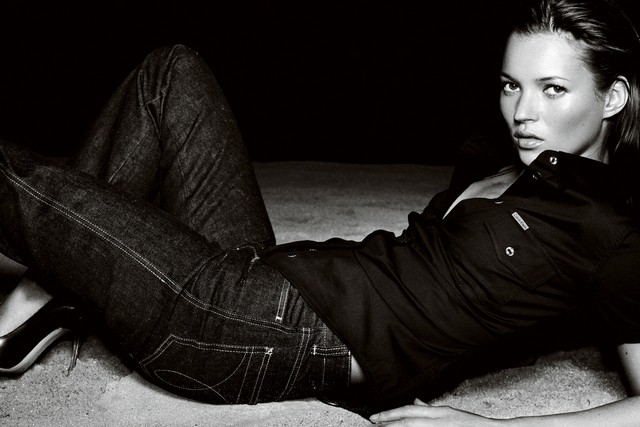 I'm fairly new to more advanced camera stuff as usually I'd do everything in post or with natural light. As I try to get better at the in-camera stuff I know I need to learn lighting.

What kind of lighting would be needed for the above photo? Can a lightwand like the soon to be release Yongnuo YN360 be capable of getting the lighting?

The catchlights in her eyes are from a relatively small light source, but the shadows underneath most if her body indicate a much softer source at a lower angle above the camera's optical axis than the light seen in the catchlights.

Any time we talk about light sources being soft or hard, or large or small, what we are referring to is the angular size of the light as measured at the subject. Soft and large mean basically the same thing, as do hard and small. Take the sun, for instance. It is millions and millions of miles in diameter! Yet in terms of photography done here on Earth it is considered a small/hard light source because its angular size in the sky is only about 1/2º. That is why the sun throws very hard shadows. A hard shadow is one with a sharp, well defined edge. A soft shadow is one with a fuzzy edge that makes it hard to see exactly where the shadow ends. To use the sun to create softer light/shadows we put some sort of diffusing material between the sun and the subject so that the light falling on the subject comes from a wider angle than the 1/2º of direct sunlight. We may also use a flash illuminating the subject from another direction to fill in the shadows created by the larger light.

In the case of your example photo, it appears that a rather wide (but not tall) light source was angled from about 60º above the camera's optical axis. Perhaps a long, rectangular soft box. A brighter, smaller light appears to have been pointed at her face from just left and above the camera. Perhaps a beauty dish, possibly with a small diffuser. Notice the harder shadow cast by her nose and arm compared to the shadow cast by the rest of her body. It is likely there were screens placed to the left of the smaller light source to block the harder light from it from spilling into the rest of the frame.

Looking at the catchlights in her eyes I'd say it's a small light source. Could be a small lightbox, but at some distance from the subject.

So no, if you were wanting to faithfully reproduce this lighting, seeing as it appears to be a small point source (or at best a small square source), a lightwand doesn't seem like the tool of choice.

9
Tips & advice for photographing store/shop interiors
5
How should I light 2d artwork in a makeshift studio? What lighting products do I need?
5
What type of lighting would provide slightly more contrast than a softbox for product photography?
6
Do I need a better Camera or do I need to learn how to use the one I have?
11
How do I setup and capture an event photo booth?
3
How can I avoid dark horizontal lines (stripes or bands) with LED lighting?
3
Best lighting management under a strong sunny sky with limited gear
3
How do I create a more natural look for watch photography using a Light Box?