Is the new Sigma MC-11 Converter just another alternative to adapters such as metabones?

Apparently Sigma has a new adapter that can be used to mount Canon lenses on the A7 lineup of mirrorless full frame bodies.

Is this just an alternative to adapters such as metabones or are there some technological advances here that surpass the existing adapters?

What the Sigma MC-11 does is different than what a metabones speedbooster does in several ways.

The Metabones speedbooster allows a mechanical connection of any lens in a particular mount (say Canon EF) to a mirrorless camera with a smaller sensor in a particular mount (say Sony E-mount). There are optical elements incorporated in the speedbooster that bend the light from the lens and concentrate it into a smaller image circle. This has the effect of reducing the focal length of the lens which at the same time increases the f-number of the lens.

With such adapters, the aperture, optical image stabilizers (IS/OS/VC/VR), and AF motor of the lens may or may not be controllable from the camera. AF and OIS control is highly unlikely in all but the most expensive adapters. More adapters do include the ability to control the aperture electronically by "translating" the camera's instruction into the "language" the lens can understand. Such adapters are also considerably more costly than "dumb" adapters that only provide a mechanical connection.

A Metabones type adapter without the speedbooster feature still only guarantees a mechanical connection. But it doesn't usually enable AF, IS/OS/VC/VR, or aperture control with lenses that communicate with the body via electronic signals and have no lens based aperture controls. The ones that do are a little over twice the price of the MC-11.

The Sigma MC-11, on the other hand, is made only to connect specific lenses within the Global Vision series made by Sigma in the Canon EF mount or Sony A mount to Sony E mount cameras. It does not include a speedbooster and Sigma lenses with a Canon EF mount that are listed by Sigma as compatible may be used on listed Sony E mount cameras with full AF, OS, and aperture control capability. There are two versions of the MC-11: One that can convert certain Sigma lens models made with a Canon EF mount and one that converts the same lens models made with a Sony A mount connection to a Sony E mount camera. Within the limited scope of compatible lenses listed by Sigma, the MC-11 provides full aperture, AF, and OIS compatibility at about half the price of other full featured adapters.

If a full frame Sony EF or A mount lens is used with the correct MC-11 on a compatible Sony E mount camera with a smaller sensor, the field of view is reduced by the "crop factor" of the camera's sensor. If a Sony DC (APS-C sized image circle) lens in EF or A mount is used on a compatible Sony FF E mount camera the camera automatically records only the center portion of the image sensor that is covered by the smaller image circle. This is similar to the way Nikon FF Fx cameras reduce the amount of the sensor recorded when APS-C Dx format lenses are used.

Please note that the MC-11 can not be used to mount Canon EF lenses or EF or A mount lenses made by anyone (including Canon or Sony) other than Sigma to Sony E-mount cameras with full AF and aperture control functionality. The MC-11 is only fully compatible with the Sony E-mount cameras listed by Sigma when the lenses used are manufactured by Sigma in a Canon EF mount or Sony A mount and included in the compatability list provided by Sigma. 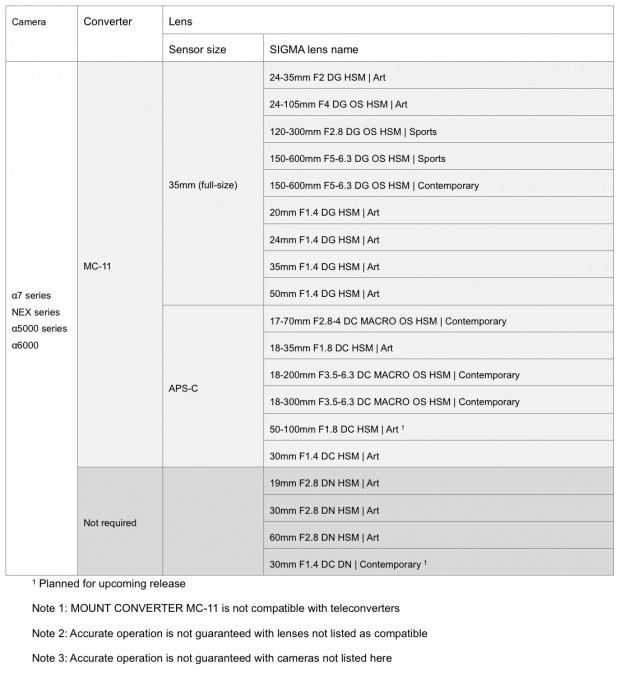 Sigma does say that additional lenses will be added to the compatibility list in the future, and existing MC-11 adapters will be updatable via the Sigma USB dock already used to update and adjust Sigma World Vision lenses. What they don't even seem to hint at is the possibility that lenses not made by Sigma will ever be added to the list as fully compatible.

Sigma Mount Converter MC-11 incorporates the data necessary for each compatible lens and uses a dedicated control program to optimize AF drive, aperture control, and other functions. This data is compatible with functions of the camera that help control peripheral brightness and correct transverse chromatic aberration, distortion, and more. As new compatible lenses are released, control data for Sigma Mount Converter MC-11 can be updated via a personal computer.

Not the answer you're looking for? Browse other questions tagged canon sony lens-adapter sigma adapter or ask your own question.

12
Is it practical and worthwhile to fit old SLR lenses to mirrorless digital cameras?
2
Are there adapters that allow autofocus & electronic control?
4
Why are SLR lenses so much larger than Sony E-mount lenses?
3
Change aperture of EF lenses without an EOS body
1
Can I use Canon EF-S lens designed for crop sensor with a full-frame Sony E mount camera?
3
Circular Polarizing filter in different lenses. Whether to use adapters or buy new filters?
0
What is the difference between Dandelion focus-confirmation chips and others?
1
Do Contax G to Leica SL adapters exist?