I have a portrait shoot that has a personal angle to it. Two college friends who are business partners want a portrait taken that expresses their close friendship while still maintaining professionalism. They've chosen to wear business clothing and this will be somewhat of a formal portrait.

A great way to show great friendship between buddies, is to let them be themselves. Its amazing what they will come up with after the initial tentativeness of the situation, all whilst you just click away.

Props is also a good way to show off a friendship. These will be props that the subjects bring with them. These will be items that have a common denominator for both. Could be something that represents their Company, or could be something of a personal nature, A basketball, the same ties or pocket hankies, or a something subtle like a cufflink with something to show off their humour. It could be a stand that they are leaning against that has humorous element to it, something that is unique to them. You need to discuss and plan this with them.

You can even ask them to share a cool moment that they have shared, and it is amazing how animated people become when talking about their shared experiences.

All of these elements plus lots more that I am sure you will discover during the shoot, will encourage the buddies to perform for you and you will end up producing a great set of images that they will be able to relate to rather than just having a predetermined set of poses.

It is up to you to bring out their friendship during the shoot and you will be surprised and spoilt for choice when you go through the final images. All you want, is for their individuality, personality and friendship to shine through along with your personal creativity, and for your images to have that personal touch, than just good stock images.

I'd try to photograph from the front, the subjects with crossed arms, slightly leaning against the other one's shoulder. 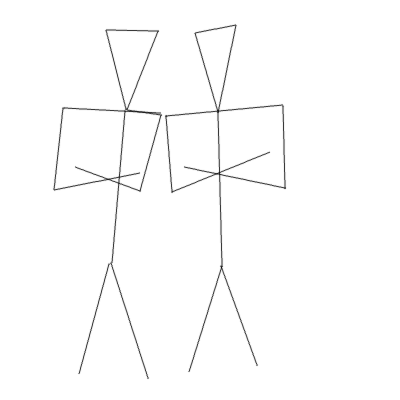 That means you don't want anything experimental or too far out there. There shouldn't be a noticeable pose. It should not look too staged.

I don't want to do the two men shaking hands shot/pose.

That's a great pose if there's anything to shake hands for, but if there's not, it's out of line.

There's another problem with the shaking hands pose: From experience, we'd say that if we see them shaking hands in a photograph, this is such a rare event that it was worth photographing. This is not the story you want to tell. You don't want to take that "ok, we won't destroy the planet"-type of cold war era hand shaking portrait upon singing some let's-not-destroy-the-whole-planet treaty.

portrait shoot that has a personal angle to it.

Also, the two subjects usually look at each other, which shows some kind of confrontation. You cannot portrait a friendship if both subjects looked into a different (opposite) direction.

If both were looking into the same direction, but you photographed them more or less in profile, you'd get a very iconic look. That can suggest strength, but more importantly, it suggests some distance to the viewer of the image. Both subjects looking to the left (or right) of the image suggests that they have the same opinion (there's connectedness between them), but they don't necessarily give a damn about you (the viewer)

This is why I think that both should look into the camera which is in front of them. It's an honest look at the subjects. "Hey there, this is who we are".

Having them lean against each other is the way to tell friendship in a professional sense, because the part of what makes a friendship that's important in the professional world is reliability: "I could lean against a solid wall, but this guy next to me is just as good", but you don't want to overdo it. It should not look like they need the other guy to stand upright. It should look like they do this because they can do it and not because they have to.

Last but not least, the crossed arms. This is more or less for lack of other way to place them. It works well with the leaning shoulder-against-shoulder pose. If the hands were free, you'd have to come up with some pose for them that's not too meaningful. If the hands don't look boring (by hanging down), they are suggesting something. Getting the hands in a pose that suggests the right thing (or at least not a wrong thing) can be tricky and hard. Crossing the arms eliminates the problem of dealing with the pose of the hands.

If this is full body portrait, I'd suggest that the legs should be straight. Both feet on the ground. You want to express stability.

Perhaps one of them could be examining a document, with the other placing a hand on the first's shoulder while pointing something out in the document. Something similar to this: 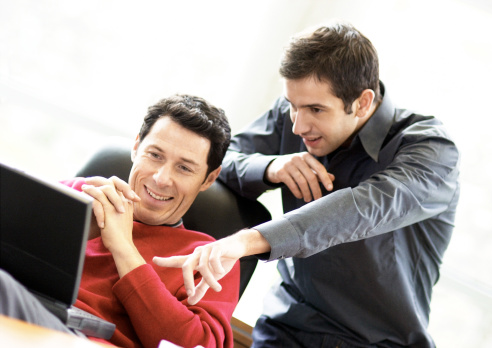 Here is a wonderful photo by Peruvian fashion photographer Mario Testino of Keith Richards and Mick Jagger. But it could just as easily be any two guys. Their smiles, their hug, the genuineness of it. Would work just as well in suits as in anything else. I'd note there's a certain care-freeness to it though that will be harder to get in suits but might still look at having the suits be "imperfect" and the hair not just spot on. 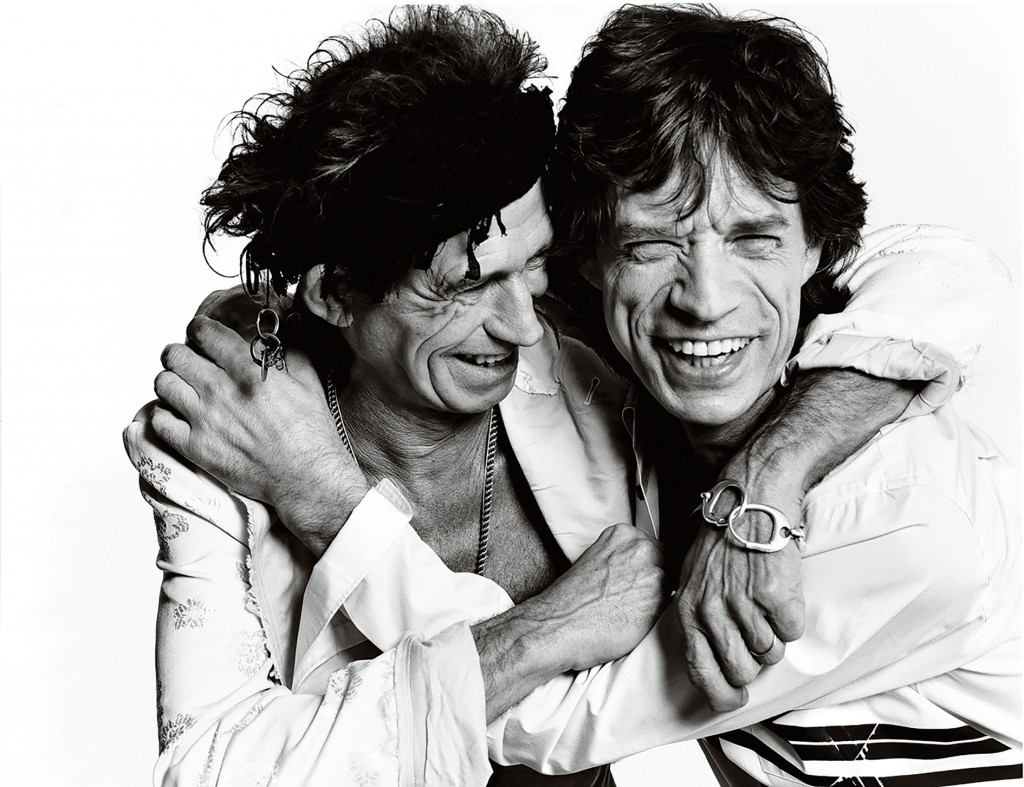 Here's a portrait of David Bowie also by Mario Testino. Granted there's only one person in this photo the genuine smile and relaxed pose could work just as well if you put another person next to him. 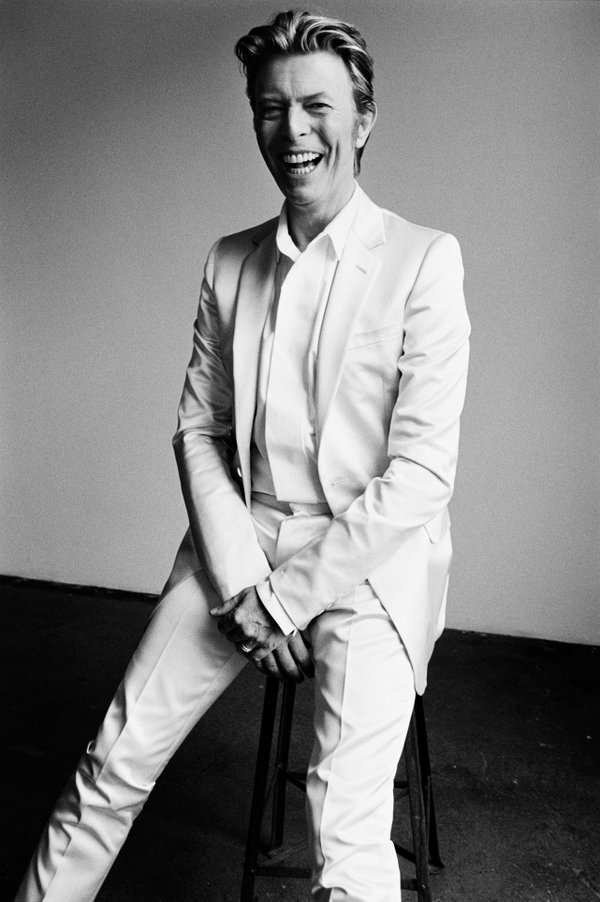 I think the key will be getting them to open up and make each other laugh. Sit around joking with each other. Then the photo will come when the moment is there. Otherwise I'm afraid you'll end up with something very stock-photoish.

Not the answer you're looking for? Browse other questions tagged portrait posing or ask your own question.

30
What portrait posing rules do you recommend for studio photography?
5
What are the best posing props and furniture for a new/hobbyist photographer?
2
What are the best books on posing?
2
How can I best shoot portraits with only two lights?
3
Broad and short lighting: is one more flattering for female portraits? for male?
17
Is there a standard vocabulary for posing?
1
Getting two subjects sitting across the table in focus