How do I get this oversatured-but-not, blown-out-but-not, subtly surreal look?

If you look at the buildings here, they're super-white and blown out-seeming. On the other hand, the black shoes are super-black, as if hand-tinted – same with the green of the leaves. Overall there's something subtly surreal about images like these because it seems like the shoes, for instance, shouldn't be that dark against the pavement. They look like they've been filled in with heavy black ink – or perhaps the edges have been blurred slightly to evoke this vaguely watercolory effect.

I see this look a lot and don't know how to get it. Is this an SOOC thing or editing? I see it's obviously a wide-open lens for the in-camera part based on the focus, but would that also account for these other qualities?

If editing, how do I get the same look? Simply blowing out whites and blacks while increasing saturation does not achieve this forme. But I doubt these bloggers who post tons of pics like this hand-saturate/desaturate each color or level in each photo. Please advise. 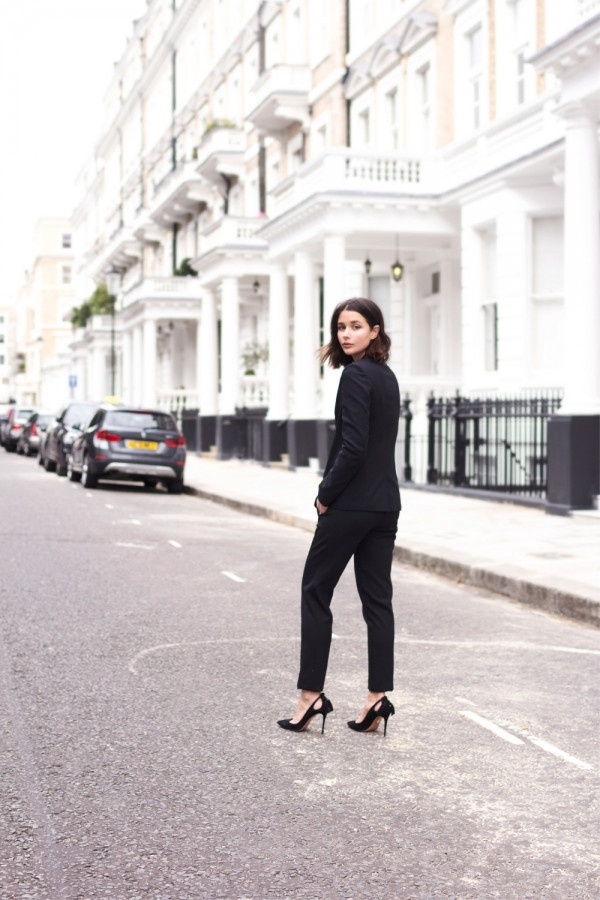 There was a bright and large/soft artificial light source or very large reflector illuminating the model from camera right. Possibly also a much weaker fill light or smaller reflector focused mainly on the face from camera left. Look at the even lighting of the face. This allowed the photographer to control the skin tones of the model using the color of her strobes or reflectors without affecting the overall white balance of the shot. If you use the color temperature needed to make the whites in the background truly white then you don't have to blow them out to make them look white.

When it comes to color and saturation, often less is more. By reducing overall saturation, the strongest colors in the scene pop out over the other colors. When everything is oversaturated, those strong colors get lost in the overwhelming mush of color. Using selective color to reduce the saturation of competing colors can also have the same effect.

Here are two examples of the same photo. The only difference at all is in the global saturation setting. 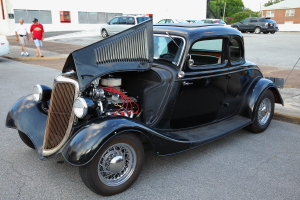 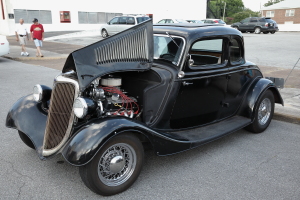 I've found that viewing these side-by-side is less effective at illustrating the "less-is-more" principle than viewing one and then viewing the other.
Here's the less saturated version in a larger size. The colors under the hood and their connection to the walking man's shirt of the same color practically demands your attention. 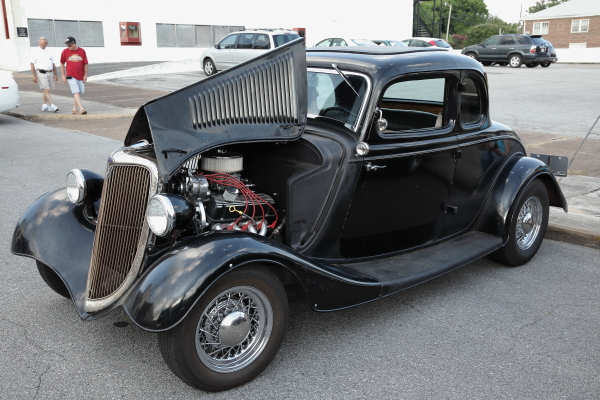 Shot with a Canon EOS 5D Mark II and EF 24-105mm f/4 L IS at 35mm. ISO 400, 1/80 second, f/6.3. Exposure reduced .83 stops in post. The wall on the large building behind was fully saturated as shot, but not grossly blown out. Notice how the less saturated version makes the blacks look more neutrally black, while the more saturated version makes the car look bluish due to the reflected light of the blue sky overhead. And that blue, along with the green foliage in the upper left corner, competes with the red for your eye's attention. Both versions had the same exact color temperature of 5500K selected.

Earlier we said, "If you use the color temperature needed to make the whites in the background truly white you don't have to blow them out to make them look white." In this case, though, it appears if as if the white parts of the building were very slightly overexposed and then pulled back just a tad in post. Most of the illuminated white elements of the buildings have (R,G,B) values of around (251,251,251) to (254,254,254). That's very uniform and often indicates the highlights were just at full saturation when exposed. If they were totally blown out when exposed, there wouldn't be near as many areas at 251 as there are, compared to the number of areas at 254. Instead, they'd all be 254. Notice the shadows under the balcony are redder (200,186,183) when one would expect the shadows to be a little bluer than the highlights in direct sunlight. The asphalt in the street also has the same warm tint. The photographer may have used a slightly warm/pinkish WB (which is what many Canon cameras will do under such cloudy mid-day conditions when set to Auto WB) and then used the full saturation to keep the white building looking pure white. Most of the mid tones in the photo have this warmish tint except the model. Her black suit has a slightly blue cast which is another indicator that either a reflector or another light source cooler than the ambient light was used as fill light on the model.

There's not a lot of contrast at the other end either. The darkest point in the picture is the underside of the right front tire of the nearest car. The darkest point I could find was at (6,6,6) and the average value of the tire was around (10,10,14) or so. The rest of the shadows in the picture are lighter. The model's shoes range from (6,9,13) at one isolated spot in her right instep to (64,62,65) at the very top of the left toe. Typical values for most of the shoes run in the 20s and 30s, with the right instep in the mid-teens for the most part. The suit is even lighter gray, ranging from the low 20s in the shadows to (88,77,91) on the top of her left shoulder with most values in the 30s. (33,32,38) is a typical value in the middle of her back.

The fact that there are virtually no uniform dark shadows with equal values in the red, green, and blue channels is another indicator that exposure was fairly bright when shot. Raising exposure when shooting to fully saturate the highlights also raised exposure of the shadows and prevented any clipping of the darkest elements of the scene. If the shadows are clipped when shot, increasing the brightness of the shadows in post will result in values such as (10,10,10), or (22,22,22) depending on how much the blacks are raised. If all three channels start out at (0,0,0) they'll have the same value in each channel no matter how high you raise them in post (unless you add a toning effect such as sepia).

The focus is a little unusual with this one. The camera looks to have been around waist height of the model, which means her face is only a bit closer to the camera than her feet. Yet the pavement in the foreground is much more in focus than the model or the pavement directly under her feet. This has the effect of not only making the model softly focused, but it dramatically softens the background which makes it even more difficult to tell how much of the details of the white parts in the background are soft due to focus/depth of field decisions and how much of the softness is due to blooming from slight overexposure.

It appears the photographer placed the model near (or even beyond, depending on display size and viewing distance) the rear limits of depth of field rather than centering focus on her face and eyes. See how much deeper the depth of field is in front of her than behind? At most, DoF in front of the focus distance can only be as deep as it is behind the focus distance for a 1:1 ratio, at least unless the subject distance is shorter than the lens' focal length (i.e. the focal length of the lens is forward of the physical front of the lens and the lens can focus that closely if that is even theoretically possible). As the focus distance increases the ratio changes to increase the amount of DoF behind the focus distance until at the hyperfocal distance and beyond the front:back ratio is 1:∞.

That is not oversaturated. Saturation is how "colorfull" is an image. A Psichodelic" poster is saturated. This photo is not. Probably overexposed is the right adjetive.

1) Ovewrexpose the buildings and not the model.

Probably it is simply that you have some buildings to the left that makes that zone less iluminated. On a photoshoot you can produce your own shadows using a translucid panel or fabric. Or simply choose the right spot at the right time.

4) To increase the contrast (that is what you are looking) is just a small manipulation on postpro. Adjust the curves in an S shape. 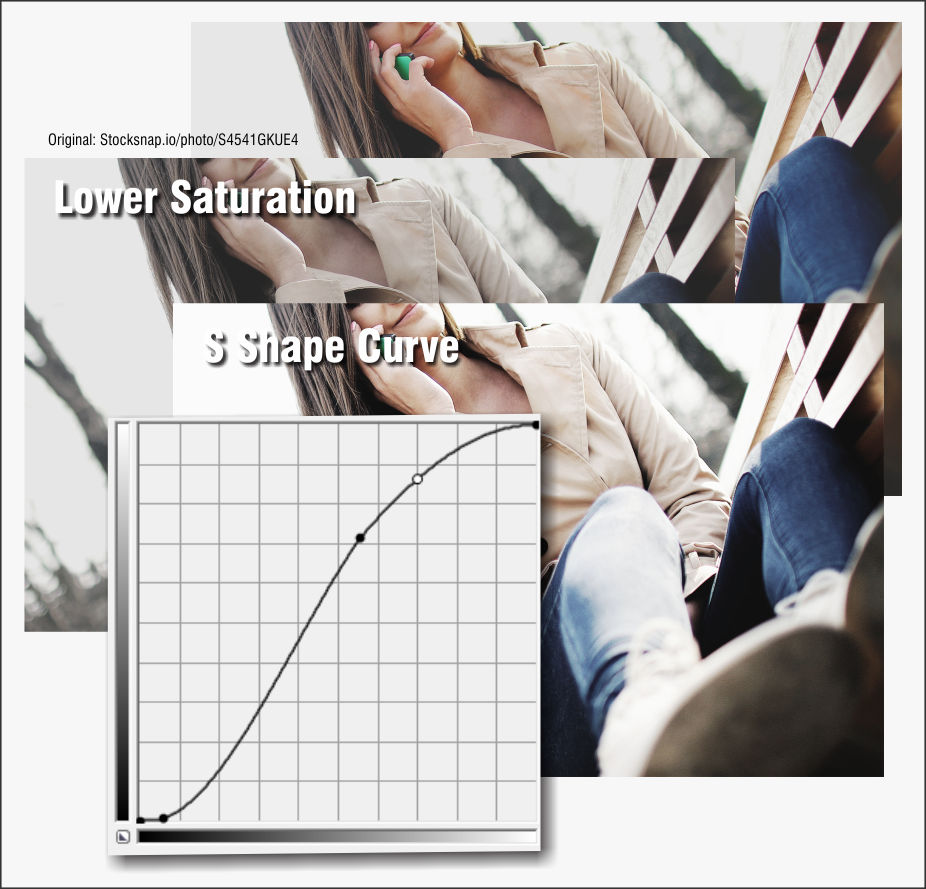 5) Reduce saturation... This is not oversaturated, on the contrary, that image has low saturation.

When you apply the curves some colors become more saturated again, so it is easier to play the curves first. On my example I did the steps backwards to show the curves.

Simply blowing out whites and blacks while increasing saturation does not achieve this.

No. The shape is an S curve. If you blow the whites and blacks you crop the info above a certain point. It is a flat "curve". That is why you need a S curve to smooth it and preserve some data on the almost white and almost black part. 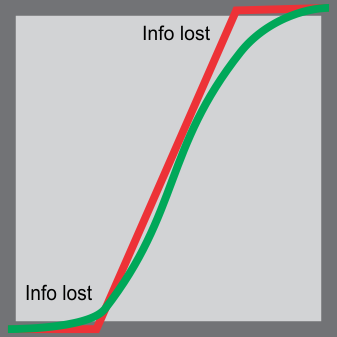 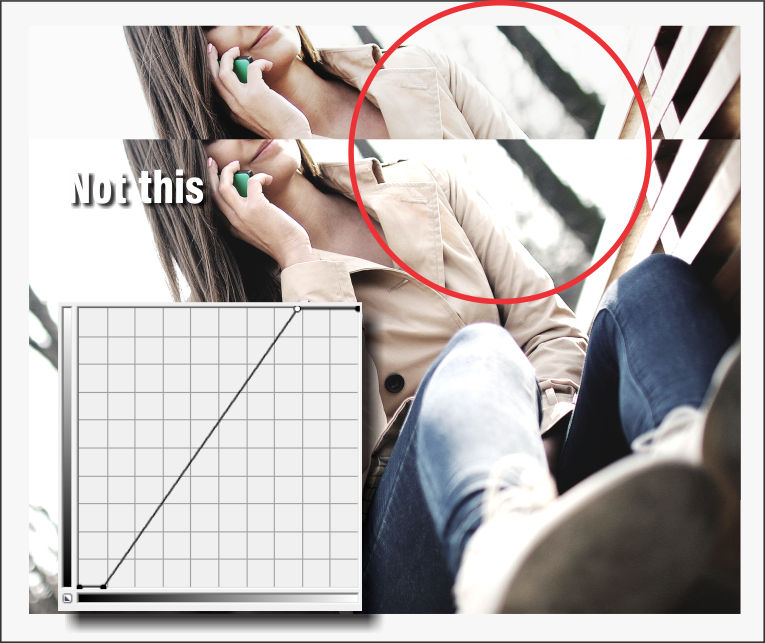 Not the answer you're looking for? Browse other questions tagged lightroom post-processing photoshop photo-editing reverse-engineering or ask your own question.

1
How do I fix blown out part of a picture on Photoshop?
1
How do I get washed out look like Tien Nguyen?
4
How were these portrait photos edited to get this look?
3
Why do highlights appear blown out in Lightroom but not on my camera?
4
How do I make my images look like this dreamlike picture?
3
How could I achieve this soft-but-powerful-glow effect in post-processing?
1
How do I fix blown out windows?
1
How were these photos edited like these?
2
How to get this vintage washed-out look?