So I was hoping I could get some specific advice or tips for good quality & cheap (up to 200€) used vintage (1960-90's) manual focus prime lenses that are adaptable to Canons EF-S mount. I am looking for something that would be equivalent to 28mm/35mm prime in fullframe. Since I'm using 60D that would be something in the range of 16-24mm. Any suggestions?

So I was hoping I could get some specific advice or tips for good quality & cheap (up to 200€) used vintage (1960-90's) manual focus prime lenses that are adaptable to Canons EF-S mount.

My personal favorite--the one I started with when adapting manual lenses to my Canon dSLRs, was the Contax/Yashica Zeiss Distagon T* 28mm f/2.8, but tastes and budgets vary widely on this, and it's narrower than you're aiming for. The problem here is that manual-focus vintage lenses are not only a tremendous pain to use, but that the amazing ones simply aren't that low-cost any more. The advent of HD video in dSLRs pretty much meant that all the crazy-good Zeiss/Leica lenses with big smooth focus throws were snapped up, and the Distagon 28 I mention that I picked up for US$230 seven or so years ago now goes for something closer to US$400 on the used market.

Add in the fact that I can't actually use it focused to infinity at f/8 on my 5DMkII (rear element hits the mirror), and its usefulness vs., say, a Canon EF 28mm autofocusing lens really makes you question whether it's worth going with a non-reporting, non-autofocusing, non-wide-open metering lens where you can never find out in the EXIF what aperture you used.

And then, there's the crop factor:

I am looking for something that would be equivalent to 28mm/35mm prime in fullframe. Since I'm using 60D that would be something in the range of 16-24mm. Any suggestions?

24mm is pretty much the widest that lenses ever really got in the film era, and those are already seen as relatively exotic lenses. Getting a 28mm gives you roughly the equivalent of a normal lens, so you're kind of screwed there, too. And while Olympus did make an OM 18mm lens, it's an exotic, and full-frame, and goes for closer to $700-800 on the used market these days. And it's still a pain to use.

Cheap vintage manual focus glass for Canon EOS will typically mean M42 (aka Pentax thread/screw mount) lenses. The quality of M42, however, ranges all over the place from the current Zeiss ZM and vintage Zeiss Jena lenses on down to cheap Russian Zenit clones of '50s optical designs (Helios, Jupiter, Industar) that you can still find new. But most vintage M42 lenses go back to the '50s and '60s, and with lenses that old, chances are good that while you might find some nice optical examples, there could be other issues, such as old grease sticking the focus helicoids, sprung/bent/broken aperture blades, or fungus on the glass.

Over time, lenses have gotten better-performing, faster, and (with the advent of digital and smaller-than-film sensors) wider. To go wide on a crop digital body typically requires a digital-era lens. And maybe you can go with an all-manual cheap Samyang lens (say, the 16mm f/2.0). But vintage doesn't really fit your requirements well. And something like the EF-S 24mm f/2.8 STM is a lot less of a pain to use.

As someone who joyously collected vintage manual focus lenses to use on her Canon camera bodies, I'd say get into this if you have a love of vintage collecting and know a good affordable CLA guy, if you're the kind of mad luddite that does something just because you can, or if you have a serious jones for something a bit more video focus-pulling friendly. But if you're just trying to save money, this particular path may be rockier than you think. It's not a minor inconvenience to shoot with a manual lens, especially since your camera and viewfinder/focus-screen really aren't designed to do it well, and a lot of the quality of what you get depends upon your adapter. And cheap is cheap. The really good adapters tend to cost three figures.

If you still decide you want to go through with it, the six mounts that can be adapted to Canon EOS with simple ring adapters (no glass elements) are: Contax/Yashica, Leica-R, Nikon F, Olympus OM, Pentax K, and M42.

I'd avoid Canon FD/FL and Minolta MD/MC as they have the flange distance issues and require an adapter with a glass element.

So I was hoping I could get some specific advice or tips for good quality & cheap (up to 200€) manual focus focal length lenses that are compatible/adaptable with EF-S mount.

There aren't a lot of new lenses that are exclusively manual focus, but most autofocus lenses have a manual option, so almost any lens in your price range should meet your manual focus requirement. If you're looking for a new lens, there's one option in Canon's lineup: the EF-S 24mm f/2.8 STM. As you can see in the picture, this tiny lens has 2 controls: AF/MF switch, and a focus ring. The price is around $150. 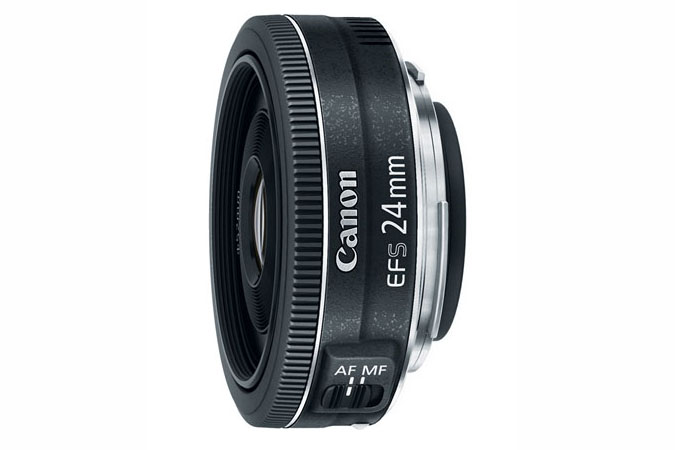 Beyond that, take a look at used lenses. In particular, if you don't mind setting aperture manually as well as manual focus, you may find some very affordable FD lenses. FD was the lens mount that Canon used before they switched to the EF mount in order to make autofocus possible, and there are lots of good FD lenses available. These can be used on your 60D's EF mount with an inexpensive adapter ring ($10 and up), but since the camera has no mechanical linkage to control the aperture you need to set it yourself.

I'm not aware of any EF lenses in that focal length range that are available new within your stated budget. With the Canon APS-C crop factor of 1.6X, 28/35mm converts to 17.5/21mm, so even the EF-S 24mm f/2.8 isn't as wide as you have requested.

You might pick up a used Samyang/Bower/Rokinon/Vivitar/Falcon/Walimex/Opteka/Bell & Howell/Polar/Pro-Optic (all the same lenses marketed under different brands) 14mm f/2.8 for around 200€ since it sells new for about 270€.

Edit: With the recent inclusion of "vintage" into the question that opens a whole new can of worms. inkista covers those issues very well in her answer.

Not the answer you're looking for? Browse other questions tagged canon manual-focus prime lens-recommendation vintage or ask your own question.

27
Can I use lens brand X on interchangeable lens camera brand Y?
14
What is CLA service?

2
Is 24mm F/1.8 Prime lens blur bokeh is good (not distorted face) for portraits
1
E-TTL underexposure with flash zoomed in and shot through a modifier?
4
Best approach for accurate & fast focusing of fully manual lenses without live view. Focus chip, focusing screen or another approach?
3
Is it safe to manual focus with AF ON on Canon L lenses?
10
How to avoid changing lenses all the time when shooting with primes?
6
I keep getting out of focus shots on manual focus - Why?
4
No1 Pocket Kodak aperture 1 to 4, f stop equivalent?
3
Canon 5DS Manual Focus Assist in Live View