Pictures like this (and I know this is an already-beautiful rainforest) remind me of how a place looks when you imagine it in your head. They have a kind of magical, dreamy touch while also being fairly true to life.

I think the effect I like is what I perceive as the low depth of field (which I assume is the key here?) –– but beyond the blur/focus factor. I'd like to understand how to recreate these admittedly contradictory things about it:

In general, the image is soft, and it pops at the same time. So, what's the effect and how do I get it in these two ways? 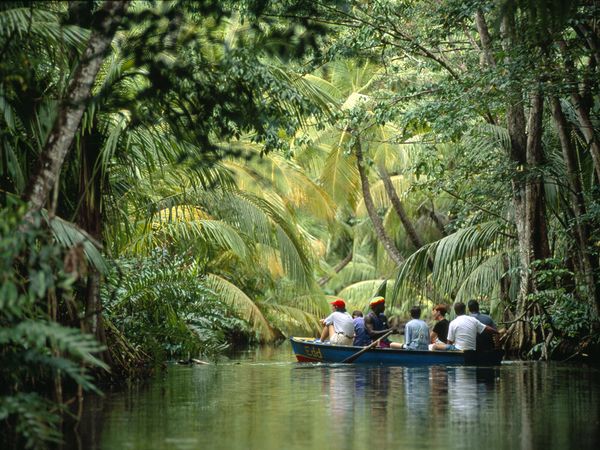 In-camera: the film/sensor may have been at least full-frame, maybe medium-format, or otherwise larger than usual, which gets you what I'll call the Brenizer look. Telephoto lens for compressed perspective, giving the appearance of looking at the scene through a window or binoculars, if you will. Don't forget the strong composition.

Lighting: it looks like there's a mixture of soft overhead light and a bit of hard light. The former creates the muted tone in the majority of the image.

I can't speak too much for the postproduction side of things, but I'd agree with you that it's a combination of accurate color, slightly boosted shadows, and slightly lowered blacks. Vibrance up, saturation down perhaps?

First, it's all about the composition and lighting. Always.

Imagine what this same shot would look like if the man wearing the red hat was wearing, instead, a dark olive hat on that day? The "pop" of that red hat in the middle of the locus of that light yellow-green vegetation surrounded by the darker green trees and water is what really makes the shot. The swooping lines created by several of the fronds lead the eye right to that red hat. Swap the red hat with the one worn by the man rowing and you have a totally different photo, aesthetically. Swap the very light and very dark colored shirts each is wearing and it gets even more different.

You can shoot them properly exposed on a medium format camera with quality, low speed film. That's what this shot appears to be. If shooting digital you can use a camera with large pixels at low ISO and keep contrast and saturation under control. Expose properly when you take the photo. Do as little as is necessary in post. A scene such as this shouldn't take much, if any, post processing when properly shot.

Also like premium film, the color is vivid while being nowhere near as saturated as most digital cameras set to "Vivid" or "Eye-bleeding" color saturation. And don't even mention those who would try to create technicolor-ed rainbows of vomit using an HDR application to "enhance" this photo.

The same goes for contrast. There's not twice as much contrast as is needed. There's just enough. Kind of like properly developed and printed low speed film.

The photo has the "look" of one made with either a camera with large pixels or a camera with a larger than 35mm film negative. But at only 600x450 pixels, it is hard to tell. In the right hands today at that resolution, other than the shallow depth of field, it could have been taken using a phone with a decent camera. And the aspect ratio is 4:3 (most cameras with Four-Thirds and smaller sensors), not 3:2 (most FF and APS-C cameras). It could be a MF camera though. Or it might just be cropped.

If it was taken with a fairly long/narrow angle of view lens, the telephoto compression would distort the shape of the boat's hull at that angle. The lack of such distortion leads me to think it was made at a fairly normal focal length: one close to the diagonal length of the imaging sensor. If that is the case, then a wide aperture was also used. At 600x450 there's not enough detail to be sure, but the bow of the boat seems to be just a tad softer than the stern, so the depth of field looks fairly shallow.

His string of 13 features published in just over 7 years between 2005 and 2012 may have left little time for an assignment located on Dominica. None of his feature articles published during that span sent him to anywhere in the Caribbean where this was captured. That leads me to conjecture that this image could have been made during the 1998-2003 time frame when most of his assignments were for NG Traveler and may well have been captured using a 645 medium format film camera using either film (most likely) or an early digital back.

Based on this dated bio and this one on his facebook page, he shot mainly with Contex medium format film cameras until his first digital project in 2001 when he used a Contex 645 with a Kodak digital back to shoot The National Geographic Society's very first digital photo assignment. He later moved to the Canon EOS 1Ds which was in production from 2002 to 2004.

On the other hand, the earliest reference to this image on the web found using tineye is a 2008 National Geographic Traveler travel guide featuring the island of Dominica. However, the image has also been used as a file image for several various other travel guides published since by National Geographic and others. It may be possible the original print publication of the image was prior to the digital publication of National Geographic Traveler. The fact that the largest resolution of the image found by tineye is 600x450 supports the theory that it is a file image that existed prior to that usage.

5
Can you tell if a photo was shot on Medium Format by looking at the result?

3
How do I achieve a vintage photo effect in Photoshop?
1
How to achieve this colored-haze effect in Lightroom?
1
Can someone shed some light on how the effect in this bar photo was done?
0
What’s this post-processing effect?
6
Resource for guidance on achieving specific styles and 'looks' independent of software
1
How to get this "Resident Evil" photo effect
0
What's the balance of highlights, shadows, lights, and darks in this photo?
5
How was this photo edited to feel vibrant and lush, but also soft?
3
Recreating the look of a lightroom preset in another software