What is the precise model and background of this Kodak Six-20 camera with bellows?

I got this camera from my grand-mother who was French. I have been trying to identify it, although there seems to be a large amount of cameras from the same era that Kodak manufactured and that all look extremely similar. On the inside of the lid, it reads "Kodak Six-20", so I know that's its name, but a Google search with this brand and model gives all sorts of different results ("same with Kodak Six-20 6.3 lens").

Maybe it's also known under another name? Or has another model name it's more known as?

The specificities of this one are the metal flat sides, diamond shaped screws, round, art deco front lens piece, red dot on what I believe is the timer, speed ring that reads "Pronto D.R.P. D.G.R.M." (would love to know what it means), and the very specific hand-shaped metal pieces on the side that hold the lens out.

I have found information about the Kodak Six-20 cameras, but what I'm trying to know is which one this one is (or what it's called), around what time this precise model was built, where it was sold, and if there are any particular articles about this precise model online. 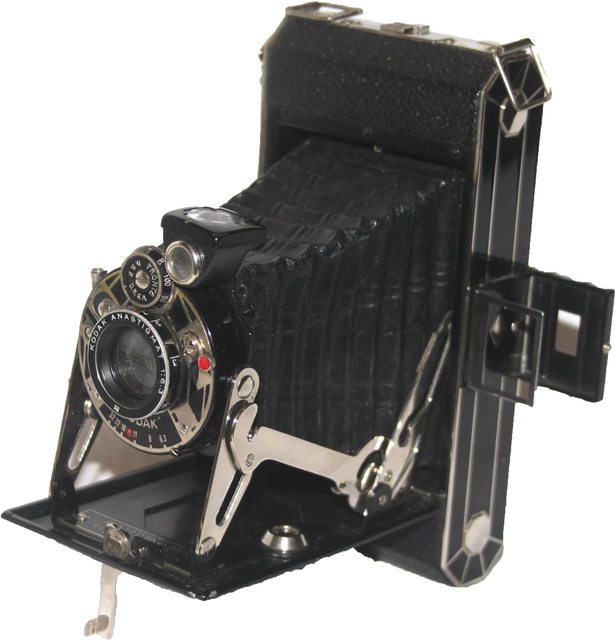 Six-20, also known as 620, is the film size that fits your camera. The film itself was the same as the more standard 120 film. The only difference is the size of the spool upon which it is wound. A 120 spool will not fit in most 620 cameras. Unfortunately, no one currently produces 620 film. If you have two 620 sized spools you can wind 120 film onto 620 spools (in a totally dark environment) and use it in a 620 camera.

The style of lens rails used for your camera appeared in the mid-1930s. The Pronto shutter indicates it was probably from the German production facility in Stuttgart as those made in the U.S. during that time period normally used a Kodak (Kodom or Diodak) shutter. When a premium European shutter was offered on U.S. made models with higher grade lenses it tended to be a Compur, rather than a Pronto.

In 1931-32 Kodak bought Nagel-Werke in Stuttgart and renamed it Kodak AG. Dr. August Nagel, one of the co-founders of Zeiss who left to form his own company in 1928, continued on as the managing director and design head. During this time he created a film cassette that would fit the successful Leica and Contex rangefinder cameras of the day. In the U.S. Kodak marketed this new packaging as the 135 format which became the small format world standard for the next 70+ years.

Not the answer you're looking for? Browse other questions tagged history old-cameras kodak or ask your own question.

4
Who is the (contemporary) photographer using an old bellows camera?
4
What is the shutter speed, aperture, and focal length of the Kodak Funsaver disposable camera?
8
Who shaped portraiture pre 1960, and how?
2
What film do I buy for a Kodak Star 500 AF point and shoot?
2
Got back my film - Nikon FM2 missing shots, blue marks, what happened?
9
What is the dented wheel with holes inside the Polaroid Land Camera Model 150
5
(How) were FoVs discussed before the 35mm became de-facto standard?
5
What is this called? Old film camera viewer?
2
What do the numbers on the left of this Kodak Vericolor film reel mean?