How does the aperture affect the focus area? Here are some examples:

Do these all differ for various physical distances between the subject and camera?

"Focus Area" as you call it can also be called the Depth of Field.

f/1.8 will always give a very narrow depth of field and would not be desirable for large groups of people. From 10 feet away only an area 1.68 feet would be in focus when using a 35mm lens on a crop camera body.

Depth of Field calculations can be complex, and will always vary with the distance to the subject, focal length, and aperture used.

It is best to use an online DOF Calculator: Online Depth of Field Calculator 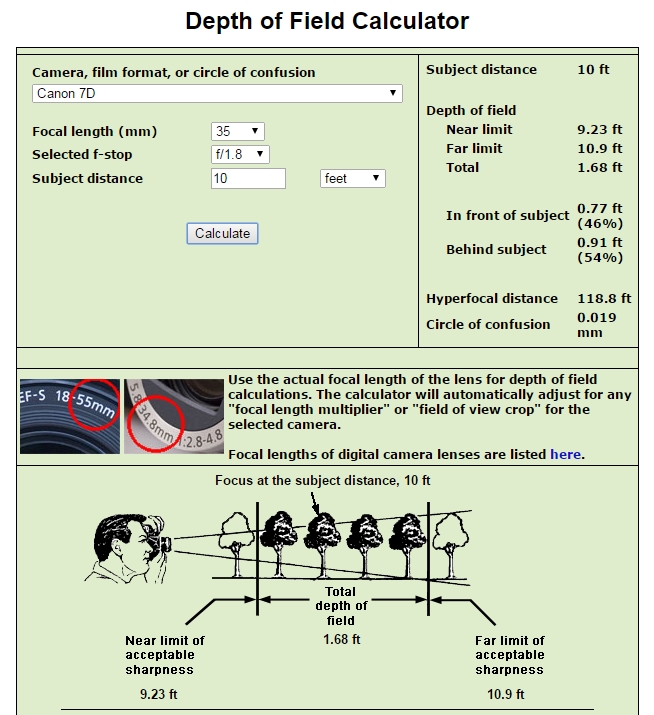 We adjust focus to a specific distance to obtain a sharp image. Practical experience reveals that objects before and after the distance focused upon, reproduce acceptably sharp. This zone of acceptable focus is what we call depth-of-field (DOF).

What determines if an image is acceptable as to sharpness? The lens projects an image of the outside world onto the surface of film or digital sensor. If we examine this image with a magnifier we can see that it consists of a jumble of tiny circles of light. These image points jumbled together making their boundaries indistinct. These we call circles of confusion. If we could make a perfect lens, instead of circles, the image would consist of super tiny points so small they have no dimension. Sorry to report, every lens ever made projects circles as all suffer from unsolved aberrations.

Now it’s the size of these circles that is the key to how we declare an image sharp or unsharp. Newspaper images and particularly the funny papers appear unsharp because we can make out the dots of ink that comprise them. Same for a photograph; a photograph will seem unsharp if the image circles of confusion are discerned.

What are the criteria for the size of the circles of confusion? Their mandatory size is based on the resolving power of the human eye. A person with 20/20 vision viewing a disk from 3000 times its diameter sees not a disc but a point with no discernable dimension. That would be a disk 10mm in diameter viewed from 30,000mm (10 meters). This works out to 3.4 minutes of arc.

For photographs, practical observation allows a lowered standard. The accepted standard is, the circles of confusion of a photograph can be 1/1000 of the viewing distance and still be perceived as sharp. We are taking 1/100 of an inch viewed from 10 inches (1/4mm viewed from 250mm). If the photograph is viewed from 20 inches (500mm) the permissible circle size is 1/50 of an inch (0.5mm).

Now our modern cameras sport a tiny format size. These images are generally useless unless enlarged. To make an 8x10 inch print from a full frame we must enlarge a minimum of 8X, from a compact digital this will be 12X. Thus the permissible size of the circles at the image plane of the camera is super tiny and it’s a variable based viewing distance and the degree of magnification applied.

The aperture (f/number) affects depth of field. The camera lens is a converging lens. The light rays transverse and are turned inward. The size of the aperture opening has a profound effect on the size of the circle of confusion size. Thus tiny apertures yield tiny cones of converging rays that kiss the surface of film or chip and yield tiny circles with superior depth of field.

As the aperture size approaches the very tiny like f/22 – f/32, sharpness deteriorates. This is because a high percentage of image forming light rays are choked off by the blades of the iris. Those image formatting rays that just brush the boundaries of the are not cleanly cutoff. Close encounters with a knife edge produce misdirected rays. These intermingle with the image forming rays. This phenomenon is called diffraction and it devastates image sharpness and decreases contrast.

57
What is aperture, and how does it affect my photographs?
68
What exactly determines depth of field?

57
What is aperture, and how does it affect my photographs?
29
How does one get manual focus right with a fast-aperture lens?
1
How does aperture/DOF affect continuous autofocus?
9
How much does a drop in temperature affect focus?
3
Do focus area modes matter if shooting in manual focus?
3
How to focus on an area correctly, while still blurring everything else?
4
Does shift based perspective correction have any effect on focus?