What model does Lightroom use for lens correction?

I use Adobe Lightroom to remove the barrel distortion from GoPro images. Does anyone know if this software uses the Brown-Conrady model to achieve the lens correction? If not which model does it use? From an extensive Google search I have done, I didn't come up with an answer.

Does anyone know if this software uses the Brown-Conrady model to achieve the lens correction?

Yes they do use those very common camera calibration coefficients. I added some copyable text versions of the formulas to the following quote: 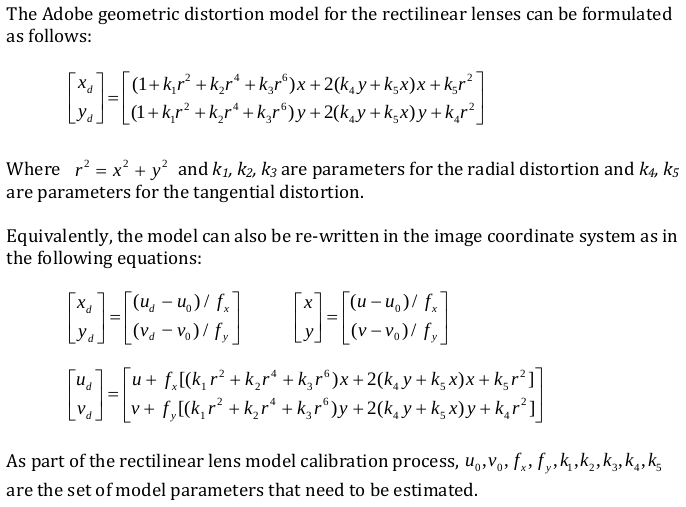 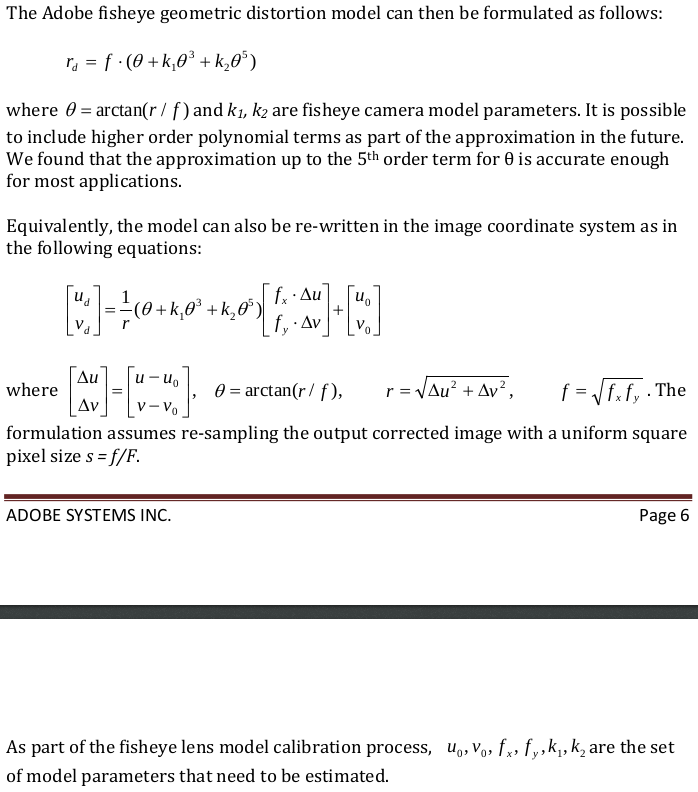 While the formulas look a bit different from those that can be found on the Wikipedia page on distortion at first glance:

The model also includes lateral chromatic aberration and vignetting, which can be found in the linked pdf file.

I'd like to add the breadcrumbs that lead me to the findings above, because

didn't cut it for me either and getting to the goal was not as straight forward as I would have hoped. This is mostly anecdotal

1 that points to macromedia.com. It looks like Adobe keeps old links alive.

I can't speak specifically about LR, but many raw processing applications don't use one of several generic mathematical models (such as Brown-Conrady) that are based on an assumption of rotational symmetry at all if the lens used is a fairly popular one. Instead they use a calibrated correction profile to correct for the measured distortion of the lens at various focus distances. This is especially true of fixed focal length lenses. The Digital Lens Optimizer module of Canon's Digital Photo Professional is one such application that uses calibrated correction profiles to correct lens aberrations with remarkable results that can even counteract the effects of diffraction due to narrow apertures.

The overwhelmingly popular GoPro cameras should have calibrated correction profiles available for Adobe to use. Whether Adobe uses and applies them I know not. (Null's answer indicates they don't.)

If a calibrated profile for a particular lens is not available or the EXIF information embedded in the photo does not properly specify the specific lens used then those applications that would otherwise use calibrated profiles will instead apply generic models such as Brown-Conrady to do geometric distortion correction.

Not the answer you're looking for? Browse other questions tagged optics distortion lightroom-5 or ask your own question.

3
How is a lens distortion model performed?
6
How do cameras undistort photos?

4
Which raw processors interpret distortion/CA correction from Micro Four Thirds cameras?
1
Can the Sony A55 software-correct lens aberrations like the Panasonic GH2 does?
8
How do straight edges end up curved in photos?
4
Best way to produce photo books out of Lightroom?
1
Does Lightroom or a RAW format store the original rotation of an photo?
1
How can I convert RAW files with proper distortion correction from the command-line?
11
Is it normal for RAW files to have lens distortion? How best to deal with it?