What is the difference between “color” and “tones”? [duplicate]

I am working through the Teach Yourself Photoshop book. I opened up a NEF file in Adobe Camera Raw.

In the text it says:

By shooting in raw you capture more information about the colors and tones in a scene.

When looking at a histogram it mentions that from left to right you have the tonal range. I always thought that this tonal range represents all the colours in the photo, but the book now differentiates between colors and tones.

So my questions are what are colors and what are tones?

I hope someone can help me with my confusion.

Using the term tone as an aspect of the hue and saturation of a color, along with its lightness or darkness is more applicable to some of the other visual arts, such as painting. Even there though, the most classic sense of the usage of tonal value refers to the lightness of a color independent of its chromaticity. Please see the link at the bottom of this answer for a very in depth look at the usage of tone in the context of painting.

In the context of photography, though, tone generally refers primarily to luminance or brightness. Since the terminology was developed when monochromatic photography was the overwhelming norm, the "tonal value" of an object referred to how bright or dark it appeared in relation to other objects in the scene. Ansel Adams' Zone System placed objects of varying brightness in 11 different zones along a tonal scale from totally black to pure white.

"Shifting an object's tonal value" involved placing a color filter over the lens to make objects that were the color of the filter brighter in the captured image than similarly bright objects in the actual scene that were a different color. (In actuality the filter reduces the overall amount of light allowed to pass through the lens, but after exposure is compensated for this light loss it has the effect of making like colored items brighter while other items are darkened). For instance, placing a red filter over the lens would make the blue sky appear darker while making a field of red flowers under that sky appear lighter in relation to the sky than would be the case without the filter. Using a green filter would darken the blue sky while keeping dark green foliage brighter. 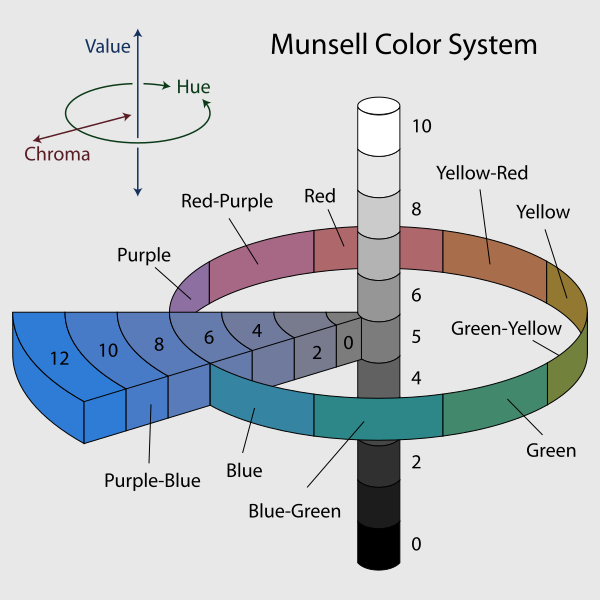 The book you are studying uses the word "tones" in this way. The histogram shows a distribution of the various brightness level in a photo. The darkest tones are represented on the left, the brightest tones are represented on the right. When you see phrases such as tonal value, tonal range, tonal scale, etc. they are almost certainly referring to luminance, or brightness, when used in the context of photography.

If you see the phrase color tones, on the other hand, it usually refers to the hue and saturation of an object as well as its brightness. Since the book you are reading seems to keep the meaning of color distinct from the meaning of tones, it doesn't appear your book uses the term color tones in this way.

Here's an in-depth article that discusses the concepts of color and tone in the context of selecting pigments for creating a painting. Even there references to tone generally refer to luminance.

Lightness, which artists traditionally refer to as value or tonal value, is the light or dark of a color independent of its chromaticity (hue and chroma).

Given all the space devoted to hue in color theory, it is surprising to learn that value is the most important design element of a painting. It is hard to overstate the importance of good value structure to the impact of visual art.

Traditionally in art, there are several different words used to talk about what we might less precisely all refer to as "color". They are:

When someone talks in general about colors and tones as in your quote, generally what they mean is: collectively, all of this. The phrase refers to all the possibilities of adjustment — both hue and colorfulness and brightness, rather than just the brightness or just the position on the color wheel.

My explanation includes a graphic to hopefully help make it clearer.

The bar on the right is the hues. The square to the left contains all of the tones of a particular hue. Any particular tone is described with two dimensions, the vertical dimension (in this representation), sometimes referred to as brightness or value and the horizontal dimension, also known as saturation.

Brightness and value can sometimes be technically different as well depending on context, but they are very similar terms.

The triad we are looking at here are often referred to as hue, saturation and value (or HSV). Or as it relates to your question, color and tone. 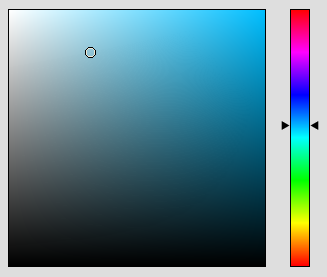 "When looking at a histogram it mentions that from left to right you have the tonal range."

The tonal range in that statement is really only referring to the rightmost vertical slice of our tone square above, so really just the fully saturated brightness. When you consider that one slice from each of the three additive primary colors; red, green and blue; you can make up all of the colored pixels in any image.

Not the answer you're looking for? Browse other questions tagged terminology color tone or ask your own question.

29
What do Hue, Chroma, Saturation, Value, Tones, Tints, Shade, etc. mean?
12
What does “Tone” mean?
7
What should I focus on when converting photos to black and white?
2
How is tonal range of a colored image mapped to a scale of 0-255 in RGB histogram?