Please take a look at the picture below from Adrian C. Murray: 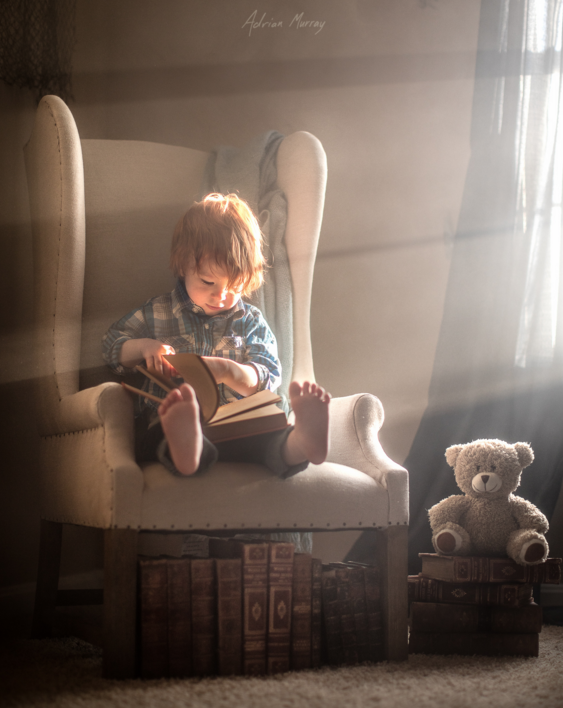 I couldn't think of any way to take such an excellent picture! any help?

EDIT:
Adrian C. Murray has said in his blog that:

I use 100% pure available light. Beyond that, it’s primarily natural light. When indoors I like to utilize a window (as I’m sure you’ve noticed). If outdoors? Well, I think you could probably figure that one out.

While my use of natural light may appear obvious to you, what might not be obvious is that I do not even use any kind of reflectors balance my image. Ever.

The photographer can claim there are no reflectors all he wants, but there are several things visible in the photo that are functioning as reflectors!

The pages of the book the child is holding are acting as reflectors to provide fill light on the face and the bottom of the child's left arm. Parts of the light colored chair are acting as a reflector, notably the wing to the child's right (camera left). The top of the teddy bear is reflecting light towards the child. The side of the chair towards the window is reflecting fill light back on the side of the teddy bear. There's also something off camera left reflecting light back onto the front part of the side of the chair away from the window. So to say there are no reflectors is not entirely accurate.

And the smoke/fog is also diffusing the light. Just boiling a pot of water in the room until the air is supersaturated can have a similar effect with bright sunlight coming through a window into a relatively dark room. The last thing you want to do is use a flash that is off-axis to the light coming through the window, as that will destroy the light beam effect.

Are you restrcted to just use natural light from the window ? I would but 2 very powerfull flashes outside and tiny bit of smoke in the room . Adjust color temperature . This should do . It needs a lot of light measuring of course

It looks to me like the photographer has used a reflector to bounce light back on to the chair.

Firstly, as another commenter has said, he's got objects functioning as reflectors in frame, even if not literal reflectors.

Secondly, he's using a camera with a rather large dynamic range (A7Rii) so will get an automatic boost over a lower-spec camera.

Thirdly, think of HDR differently. I always shoot raw and process using CaptureOne Pro. I can do a really quite good HDR from a single exposure using that; it's doing the same trick that we've done for ages on 8 bit JPEGs using the 14 bit raw data. Shooting a Nikon D600 and processing this way, I've got a photo shot inside a sea cave showing detail on the roof inside and the sunlit wall near midday outside. If I can't get enough that way for any reason or want more precise control, I can always process the same exposure twice with different settings and merge - see https://www.flickr.com/photos/gpwebb/14473460635/in/dateposted/ for example. Gives a wider dynamic range from the same exposure, so no problems with moving subjects.

Note that on this picture, the dynamic range is not as big as it seems. The photographer carefully avoided including the window itself, but suggests it with curtains. Bright curtains, for sure, but not as bright as the window itself.

Not the answer you're looking for? Browse other questions tagged hdr sunlight shadows subject-movement or ask your own question.

29
When should I use graduated ND filters and when should I use HDR processing?
9
What is DRI? And how does it differ from HDR?
6
When is it better to use HDR rather than just pulling extremes from a RAW file?
3
Can I use high ISO film in bright light (without problems)?
7
How to reduce shadows on product photos when there is no room between the subject and the background?
17
Things to look for in a camera to match cameraphone image quality
1
HDR merge produce lackluster result