Ask Question
Asked 6 years ago
Active 6 years ago
Viewed 215 times
2
This question already has answers here:
What methods can be used to micro-adjust autofocus of a camera body to a particular lens? (5 answers)
Closed 6 years ago.

I just got a 35mm f/1.4 lens and wanted to see if it has any focus issues to be fixed. So I got this kit and not sure what exactly I should have done but I focused on the middle of that bar code like area where it was bent and took the shot. To my eyes ( and I don't have good eyes) feels like Zero of the ruler is in focus but at the same time I feel like nothing is sharp enough. So I uploaded the image here in DropBox, please take a look and tell me what you think.

The target is under illuminated and underexposed. If the jpeg was generated in-camera the camera probably applied fairly aggressive noise reduction to the image. This will reduce the acutance of the image. If you haven't already, put the camera on a stable platform, such as a tripod. Use base ISO and expose for as long as necessary to properly expose the target. Since the target is white, you'll probably need to use between +1 to +2 stops of exposure compensation. Your light meter wants to assume everything is mid-grey. Avoid fluorescent lights if at all possible as well. Use a flash if necessary, although bright continuous light is preferable since the AF system can also take advantage of it.

Your target also appears to be slightly misaligned, as the right side appears to indicate very slight back focus while the left side appears to indicate very slight front focus. The perspective also indicates your optical axis is not parallel to the axis of the test device. Your camera is too far to the right and pointing at the target at an angle. For these types of test devices to provide any meaningful data, the target and camera must be properly aligned. The center of the optical axis should pass through the center of the focus target. The focus target and the image sensor must be parallel to each other both in terms of up/down and left/right. And the focus target in the middle of the device must be properly positioned with reference to the scales on either side. The lines at the "zero point" on the scales on both sides, when extended, must pass directly through the plane of the focus target in the middle. Any angles that are not correct will reduce the accuracy of the device. 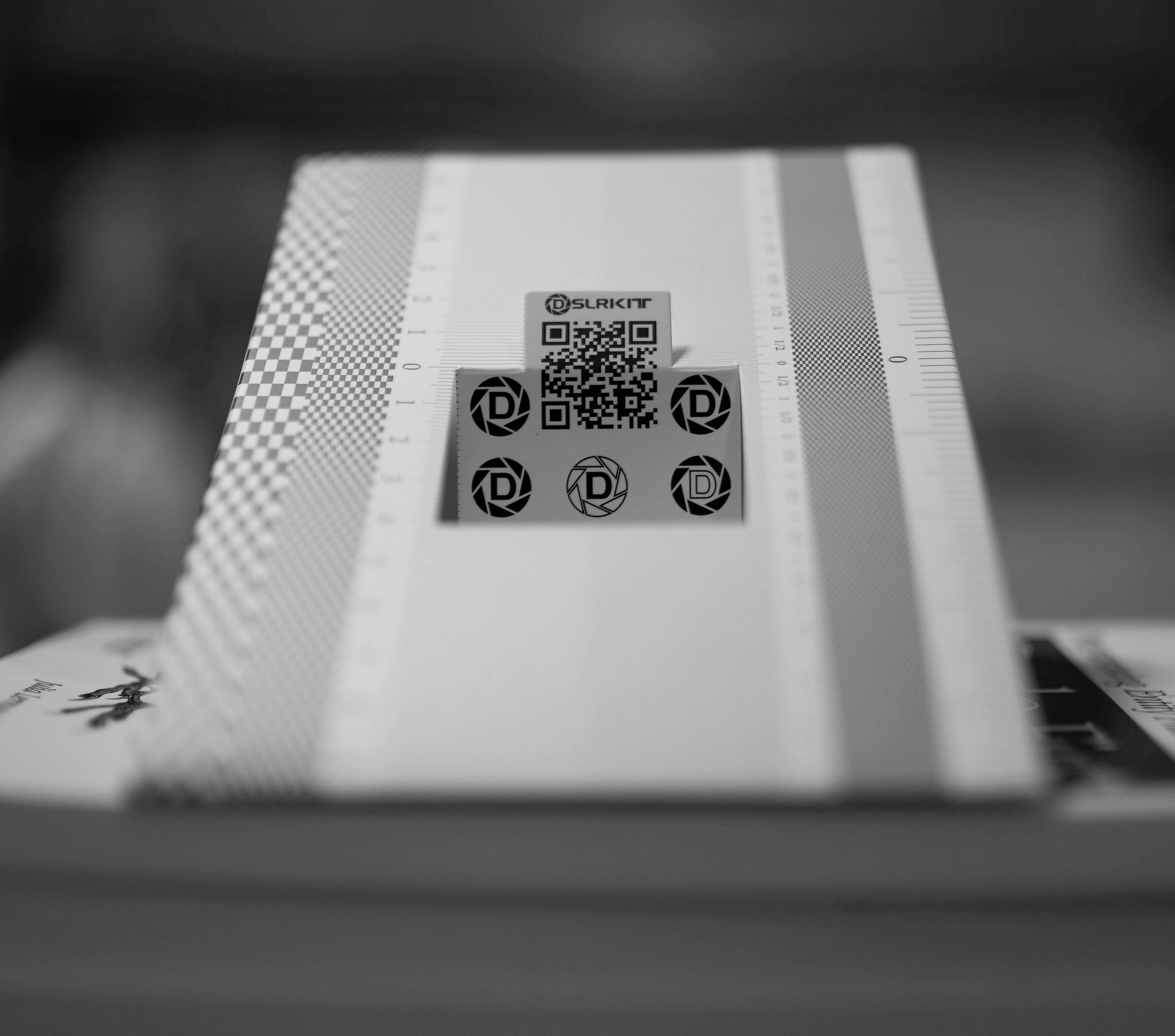 Just increasing brightness, correcting the color temperature and then converting to monochrome, increasing the contrast a tad, and sharpening makes it look a little better. Of course since I started with a jpeg, compression artifacts were increased along with the sharpening and contrast.

The focus looks nearly if not completely spot-on on my monitor, though try leveling the focus chart (you can see it's slightly tilted, which will throw off your measurements).

You are more likely to be seeing the effect of spherical aberration in the lens, which manifests as a "glow" even on in-focus parts of the image. That this is common in all fast lenses wide open. If the problem goes away at f/2.8 or so, then that is the culprit.

Not the answer you're looking for? Browse other questions tagged autofocus focus or ask your own question.

56
What methods can be used to micro-adjust autofocus of a camera body to a particular lens?
9
How do I diagnose the source of focus problem in a camera?
0
Why do my studio shoots usually end up fuzzy?

39
Focus problem vs. motion blur vs. camera shake - how to tell the difference?
3
Do the issues with sharpness I am seeing require AF fine-tuning?
9
If the focal plane is curved, should the outer AF points work correctly or front-focus?
1
Nikon D3000 Blurry Pictures. Focus Issue?
4
Why is my camera focusing fine in liveview but getting it wrong with the viewfinder?
1
Bad focus. Is it me or my body (D7000)?
1
Which camera (and lens) mode or settings for moving subjects?