I have a 13 inch screen and my friend has a 27 inch screen. If we both download the same photo from my website, the file size and photo dimensions are the same (70ko and 300x450 pixels).

However when we open the photo in our respective softwares, his opens to 9x14 cm and mine opens to 6.5x10 cm for the same quality!

Also, he can scale the photo to around 30x45 cm before you start seeing pixelization, whereas around 10x15 cm mind is already so pixelated it's basically useless.

I don't understand how there can be such a difference. If the file size is the same and the dimensions are the same, why would there be a difference from one screen to another?

I suspect you are mixing a couple of things here - and so far the good answers have touched on it.

What is "image quality"?

Assuming we can ignore colour accuracy, the number one way of improving image quality is resolution - hence the bigger you want to print, the more resolution you need. Of course the image has to be sharp - hence it can be advantageous to upscale an image prior to printing at a larger format as this allows you to say sharpen the upscaled image more to account for a loss in sharpness from upscaling.

If we now return to a computer screen, perceived image quality will depend (aside from colour accuracy) primarily on pixel size, the smaller the pixel, the sharper an image will look. (A common monitor will be around 96DPI/PPI, though today's high resolution screens are often higher.)

So if you now take the same image to two monitors of different pixel density (PPI), on the monitor with the higher pixel density the same resolution will be displayed on a smaller space with smaller "pixel points". E.g. 500 pixels will cover over 5 inches on a common PC monitor, while on my (Fujitsu) IGZO screen laptop at 262PPI it would cover just 2 inches. THIS is the size difference you have observed.

Nowadays, anything below 1920x1200/1080 for a 24" monitor is insulting, while high end monitors will offer "4K" (marketing blurb for 3820x something) or higher resolution. However, some high quality products will also offer high resolutions on smaller screens, my laptop offers 3200x1800 on 14", about 262PPI. Having said that, many smartphones are in similar pixel density territory, my BlackBerry with 1280x800 pixels on a 4.5" screen has a pixel density of around 348 if I am not mistaken. (Some newer phones again offer higher pixel densities.)

Incidentally, common advice for typical 10x15 photo prints is to print at 300DPI as it is hard (if not impossible in the case of ink) to distinguish pixels at such a dot/pixel density.

Now coming back to monitors: In some, but not necessarily all cases, users of high resolution monitors may employ "DPI scaling" (as Windows calls it). This will result in image or video content being upscaled (though I'm not sure if browsers will take files "as is" if they are scaled using HTML which is otherwise considered bad practice) which will result in "fuzzyness" for most images. (Mainly because images are just upscaled and not sharpened again.) An exception to this is text or vector graphics which are just re-rendered at a larger size if scaling is required.

Displays can have differing resolutions as well as differing physical sizes. See: https://en.wikipedia.org/wiki/Display_resolution

It is the screen resolution not the physical size of the screen that determines the viewing quality. 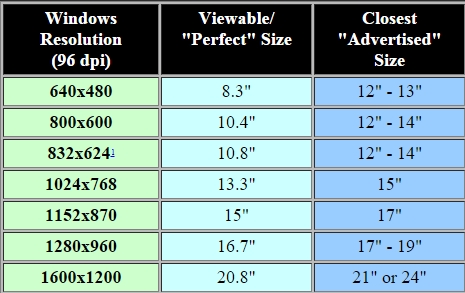 Not the answer you're looking for? Browse other questions tagged image-quality computer-hardware or ask your own question.

4
Why is Nextgen / wordpress is reducing the quality of my photographs?
1
How does the megapixel-count and the aperture size affect the quality of the image from a given lens?
5
How does an anti-alias filter affect image quality other than reducing Moire?
0
Does using more than one step-up ring affect quality?
6
Does converting image file formats affect quality?