I was working on some selfportraits using interval timer shooting and I found that the camera focuses one of 3-4 shots on the subject.

Obviously, it recognizes the face but most of the times, it has scattered focus points around everywhere.

Ideally I would like to use a setting which would only pick one focus point, not a group from completely different areas. However, the only choice I have for the number of focus points is 11 or 39. Whether I'm in AF-A or AF-S there are two options - use all focus points or only the center one. The subject is not always right in the center and I end up using all focus points resulting in 1 out 4 focus images.

Just a follow-up. I found that the best way to detect faces is of-course in live view which is inactive when interval timer is used. I also used a remote, but I find it less convenient than interval timer and I have similar focusing issue with it. 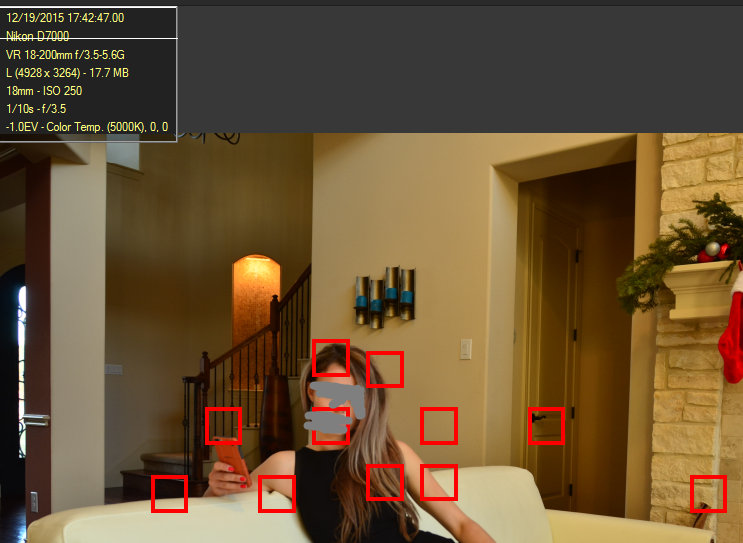 When multiple AF points light up such as in your example, it means the camera interprets the information from its AF system to indicate all of them are within the acceptable depth of field. With a maximum aperture of f/3.5, shallow depth of field is not your problem.

But, since you asked, you can just look through the viewfinder at where you plan to be in the frame and select the single focus point that corresponds to that position. The Nikon D7000 allows for using a single selected focus point. Please note that designating it as a manually selected focus point doesn't mean you must manually focus to use it - it just means that you get to manually tell the camera in advance which focus point to use for autofocus! The instructions on how to select a specific focus point are located on page 96 of your D7000 User's Manual

Please see this answer for more on how the area of each focus point is larger than the little square in your viewfinder as well as why the far left and right AF points might not be as accurate as the center one(s). Although the camera is a different model from a different manufacturer, the concept is shared across brand and model lines in cameras with a large number of AF points. Nikon does tend to not include as many cross-type AF points as Canon, so it is more likely that half of your outer AF points are horizontally sensitive and half are vertically sensitive, rather than all cross-type as in the example at the link.

I think you will ultimately find that at least some of the blurriness you are blaming on AF is more a result of shooting with that lens wide open, at a shutter speed that can be particularly affected by mirror movement vibrations, and in poor lighting that is a different color temperature than what you've set your camera.

Not the answer you're looking for? Browse other questions tagged nikon autofocus nikon-d7000 or ask your own question.

9
If the focal plane is curved, should the outer AF points work correctly or front-focus?
4
How can I more consistently focus on the point I want?
3
How can I get correct focus when taking a self portrait with a DSLR?

12
How can I get everything in focus? (Why can't my camera just use all of its focus points at the same time?)
3
How to eliminate auto focus noise in video mode when using NIKON D7000?
31
What is the advantage of the huge number of AF points?
8
What do orange AF points mean on a Canon DSLR?
8
If I'm using only one focus point, am I doing it wrong?
1
What is the Autofocus type in Nikon D3300?
2
Metering for Fast Action Under Changing Lighting
0
Nikon D7000 Interval timer shooting not available for manual focus lenses
6
Why is interval timer shooting unavailable in every mode on my Nikon Z6?
2
Is it possible to focus on a fixed distance for self portrait using Point and Shoot camera for a decent photo?