I'm currently thinking about getting a 256GB MicroSD card to use with a Canon 5D Mark III DSLR camera, and am wondering what the maximum MicroSD card capacity is supported by the camera.

Does anyone know the largest MicroSD card capacity supported by the Canon 5D Mark III camera?

MicroSD cards are supported provided you use them with an adapter.

The 5D Mk III manual says it can use cards over 128GB capacity so I would assume there is no upper limit. 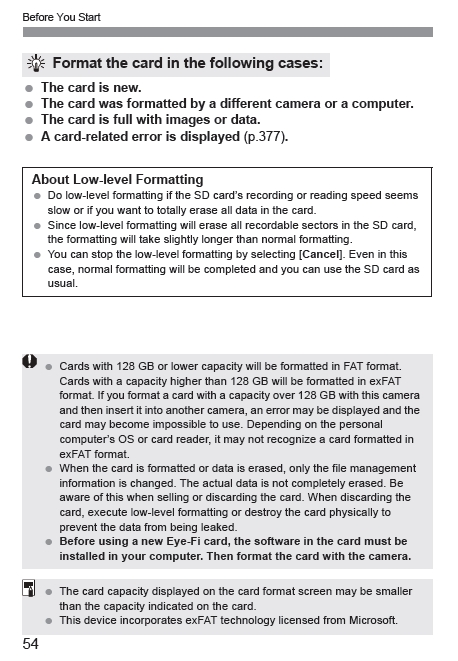 Note: No microSD is supported unless you use a microSD-to-SD adapter.

It's also worthwhile to mention, a MicroSD-to-SD adapter would not bring any loss of performance (either in writing or reading speeds) since the adapter is doing nothing but connecting the pins of the MicroSD card to the contacts of the SD slot.

The maximum size of CF or SD cards supported, 128 GB, is certainly supported for both CF and SD Cards.

I haven't yet found any information regarding 256 GB cards being supported by this camera.

Later edit: I have found a review of the camera specifying that Canon declares 256 GB cards will work just fine with the camera. Photo.net Review

The cards normally use the FAT32 file system but the 5D Mark III supports exFAT not only for SDXC but also for CF cards with storage capacities greater than 128GB. Maximum card size isn’t specified, but Canon commented that the latest 256GB cards work just fine and larger cards should work in the future. I can’t say for sure if the full 2TB limit of the file systems will be fully supported, but I think the day of 2TB cards is probably far enough away that it’s not really much of a concern (not to mention such cards would likely cost more than the camera…). UDMA mode 7 is supported.

Came to confirm that the Micro SD card 256 GB can be used through the adapter to the SD card with the Canon 5D Mark iii camera and can be formatted within the camera. Tested the shooting and brought it to the PC, okay, both raw and jpg.

Not the answer you're looking for? Browse other questions tagged canon-5d-mark-iii memory-card-size microsd or ask your own question.