How can I photograph bright lights properly?

I built a toy light saber, and I'd really like to get a good picture of it. This is what it looks like when I try to take a picture: 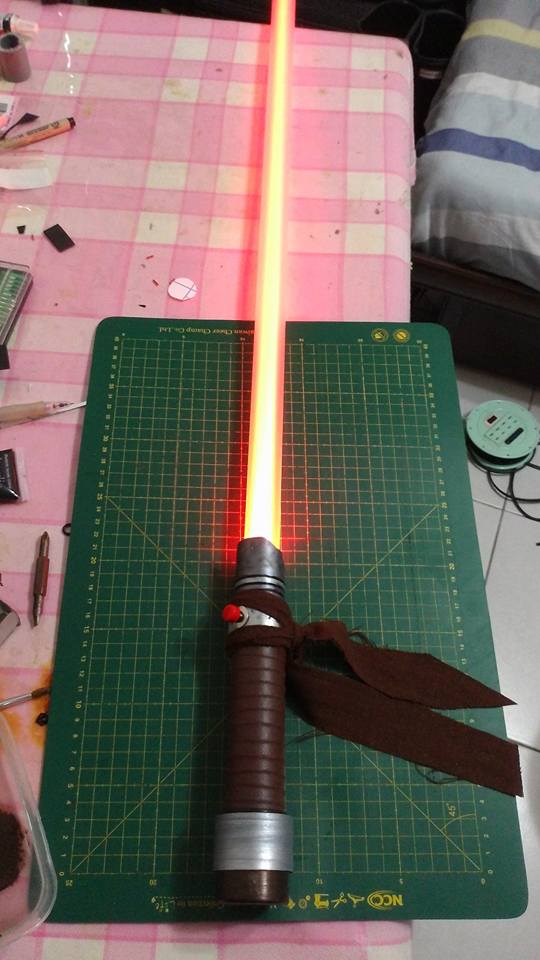 The blade is not actually that color. With my own eyes, it looks red, but through cell phones and digital cameras, it always looks bright orange. Is there a good way to correct the way lights look through a camera?

There are two issues at play here.

The first is exposure. If your camera completely blows out (oversaturated) the light from the "blade" of the model because the rest of the scene is much darker then it doesn't matter what color the "blade" is, it will show up white in the photo. Why? Because even though there may be more red than blue or green light in the "blade", if there's enough blue and green in there for them to be completely saturated on your camera's sensor at the exposure selected by the camera, the (R, G, B) values on a scale of 0-255 will be (255, 255, 255). Even though there is ten times as much red as there is green or blue, the camera can only count the red up to 255, not 2550! When viewing the image this area will appear white, since all three color channels have the same numerical value. In your case it appears the red and green channel may both be oversaturated but the blue channel is not, thus you get orange as a result.

The second is white balance. If your camera is set to "auto" white balance it tries to determine what color temperature and tint values to use when interpreting the data from the sensor based on the brightest parts in the picture that aren't oversaturated. If the brightest non-saturated part of your picture is not actually white, then the camera will fail to set white balance correctly.

So, what can you do to correct this? If possible with the camera you are using dial in some negative exposure compensation or use manual exposure to reduce the overall exposure. When the light from the "blade" is no longer blown out it will appear more red if that is the actual color of the light from the "blade". You can also attempt to adjust the white balance to match the lighting conditions in the room. Since you haven't told us what type of light is illuminating the "blade" from the inside, you might need to experiment until you find a preset WB setting that works best.

You're going to have to shoot this with manual settings or look for an option called exposure compensation. In this case the saber is too bright compared to the ambient light so you are going to need negative exposure compensation in the neighborhood of -2 to -3 EV. Another option is you may be able to fool your camera's meter by turning off the other ambient lights.

If I were at your place, I'd try to shoot in dark (in case I want only the light with a enough detail for the viewer to understand that it's a saber).

If you want to shoot with lights on(to have other objects other than the saber) I'd adjust the exposure and bring it down to at least -2. Hope this works.

5
What does it mean when color channels clip?

9
How do you avoid a dim portrait with a bright background and no external flash?
5
What non-studio lights are best for photography?
4
Lights for a Light Tent
6
How do I create this soft bright look?
1
Why are these lights all different colours and how can I correct them?
2
How to retouch to correct lights from an amateur photo shoot?
3
How to create still life silhouettes with candle lights?
14
How can I take a photo of a dark bar with a bright sign?
2
Can I dim lights by making amount of power smaller?