In another answer user Ilmari writes, in the context of preventing overexposure:

In general, I would also recommend always shooting RAW, both to better capture the full dynamic range of your camera, and also to avoid the ugly digital clipping of overexposed areas. For the latter, it helps to underexpose your shots a little (say, ...) and then pull the exposure up on your computer, ...

How does RAW prevent clipping of overexposed areas?

In general, I would also recommend always shooting RAW, both to better capture the full dynamic range of your camera, and also to avoid the ugly digital clipping of overexposed areas. For the latter, it helps to underexpose your shots a little [...] and then pull the exposure up on your computer.

OK, yeah, I was being a bit terse when I wrote that. Let me try to unpack it a bit.

Obviously, just switching from JPEG to RAW won't do anything to fix clipping on its own. What I was trying to suggest, when I wrote the paragraph above, is:

Why go to all that trouble, instead of just shooting JPEG directly at default exposure? Well, basically (besides all the other reasons to shoot RAW), so that you can get this: 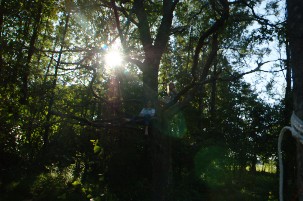 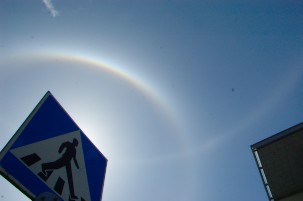 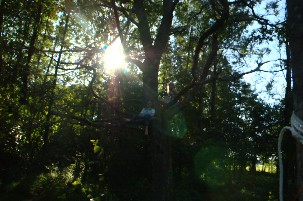 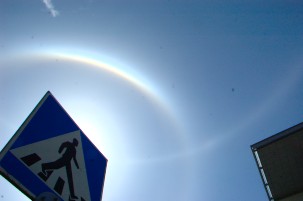 Of course, I cheated a bit by making both of these example image pairs from the same RAW files — the only difference is that I used "soft film-like highlights" mode for the first pair, and "hard digital clipping" mode for the second pair, simulating what I would've got if I'd shot them directly in JPEG with a longer exposure.

Note particularly the characteristic cyan sky on the top right in the clipped version of the first image, the unnatural flatness of the clipped highlights, and the general color distortions around them. (Pictures with bright white background elements, such as snow or clouds, tend to show this effect particularly prominently, but I didn't happen to find any good examples on this laptop. I may try to look for some better illustrations later.)

The reason for this flatness and color distortion is that, unlike the smoothly saturating light response curve of film, digital image sensors have an (approximately) linear response up to their saturation point, and then a sharp cutoff:

(Actually, the film response curve drawn above is somewhat misleading, in that turning the film negative into an actual positive image introduces another layer of nonlinearity at the low end of the response curve, typically resulting in a somewhat sigmoid combined response curve. But at least at the highlight end of the dynamic range, the curves above do resemble the actual light responses of film and digital cameras in a general way.)

In particular, in color photography, each color channel (red, green and blue) has its own response curve. With a digital sensor, this means that, as the brightness of the incoming light increases, one of the R/G/B channels will typically clip before the others, distorting the color of such partially clipped pixels.

Also, the flatness of the digital response curve above the saturation point means that, whereas overexposing film just compresses the highlights, any clipped highlights in a digital photo (whether RAW or JPEG) are just gone, and no detail can be recovered from them. Thus, the rule of thumb for digital photography is that, if you're not sure what the optimal exposure will be (or if you know that the scene you're shooting includes highlights that you don't want clipped), it's always safer to err on the low side. Sure, pushing up the brightness of an underexposed photo in post-processing will also amplify the noise in the image — but underexposing a little, and losing some shadow detail to noise, is still usually better than overexposing and losing highlights completely.

Of course, none of the above requires you to shoot RAW — you can push up the brightness of JPEG images e.g. in Photoshop just as easily. But compared to RAW, the JPEG format has two issues here:

A RAW file, in comparison, preserves the full dynamic range of your camera's sensor with no lossy compression, allowing you to post-process the image to the full extent possible (in this case, mainly limited by the sensor's noise floor).

In short, a RAW file stores each pixel using more bits than the corresponding JPEG.

To understand how this helps, consider a single pixel (we'll ignore colour, the same logic holds but it just complicates everything). If you have 8 bits available to record the amplitude (amount of light that hit that pixel) you have 256 levels, including "no light at all" (0).

You must set a maximum level, which corresponds to the value 255. The range between 0 and this maximum is the dynamic range that can be represented in the image. Any pixel that receives more light than this level is saturated, and the maximum value of 255 is recorded. This causes the clipping effect, where overexposed areas look completely white.

If you have additional bits, you can represent more levels. With the same dynamic range, you'll get finer steps between them, or you can extend the range and allow pixels with higher (or lower) exposure to be represented somewhere in the range.

A RAW file contains more bits per pixel than the corresponding JPEG (e.g. 14 for Canon 5D, compared to 8 for JPEG). This allows it to capture more levels of exposure. Pixels which would be saturated in an 8-bit representation may not saturate a 14-bit representation. This turns the completely white overexposed areas into shades of grey, and allows some detail to still be captured.

Of course, it's still possible to saturate a higher bit-depth representation, but the more bits you have, the more information you've got to work with.

Raw is great for a few other reasons, but of course raw CANNOT prevent clipping of overexposed areas. Once the digital data exceeds 255, it is clipped, meaning it remains at 255, no longer representing true color. Digital simply has no way to retain larger numbers, the largest capability is scaled to 255. There is no way to recover the clipped data, other than another try with less exposure.

Your linked example possibly was NOT white in the first place, but it came out overexposed and clipped at 255, 255, 255, which is white. There is no recovery for clipping.

Not the answer you're looking for? Browse other questions tagged raw overexposure highlights highlight-recovery or ask your own question.

307
Good examples of RAW's advantages over JPEG?
19
Why are blown highlights particularly bad in digital photography?
6
How can I avoid this blur during taking indoor party pictures?
14
Any way to prevent a flashlight from blinding a camera?
14
How can I take a photo of a dark bar with a bright sign?
5
How to make camera LCD show true RAW data in JPG preview and histogram?
8
What's the actual physics of diffusion filters?
1
Why do RAW files only show you 8 bit of the 14bit recorded?

12
What is white or black "clipping", and how does one avoid it?
15
Why is my camera so forgiving for overblown exposure when shooting in RAW?
3
How do I prevent photoshop shrinking my RAW files?
3
Why use UniWB? Doesn't apparent clipping of "final" colors matter more than actual clipping of RAW sensor values?
1
How do histograms handle highlight and shadow clipping?
0
Does Lightroom accurately show highlight and shadow clipping?
4
How can I correct overexposed highlights on skin in a RAW file?
1
HDR and RAW dynamic range clipping, mapping, and compression
4
switched to RAW and seeing ugly light bands in Lightroom
8
Qualitywise, is there any downside to overexposing an image (within the dynamic range of the camera)?