What are some smaller digital cameras with remote shutter releases? [closed]

I am looking for a digital camera, other than the DSLR types, that has a remote shutter release. My wife has rheumatoid arthritis and can't use a larger style camera. What are some smaller type cameras that can use the remote shutter buttons?

That is a good question and the answer is a bit tricky to find. You basically have to search for any other criteria you want using Neocamera's Camera Finder and then filter on either Wired Remote or Infrared Remote towards the bottom of the orange box next to the search results. Then you need to either ignore the DSLRs that show up, or simply filter on the category you are looking for (Compact, Ultra-Zoom, Large, etc) near the top of the orange box.

The results show only the Oympus XZ-1 to have a wired-remote among compacts. There are also 9 large ones. Three ultra-compacts have wireless remotes too. Finally the Sony NEX-5 also has a wireless remote.

PS: It does not take long to search for these things but when someone is looking for NOT something, there is no easy way. I don't know of any camera site that lets you do that. So it is probably better to specify what you do want instead of a DSLR.

Either the Canon PowerShot G11, or the newly-released G12 may be what you need. While they are on the large side for P&S cameras, they are quite a bit smaller than a DSLR, and both support a wired remote shutter release.

Another option is to use CHDK on a supported Canon compact camera. One of the many features of CHDK is a shutter release using the USB port. I have not used this myself, and it may be out of your comfort zone to get a non-official firmware running on your camera, build a custom cable for the release, and so forth.

Dpreview has a clever feature search tool. It can do exactly the search you described in the question.

It is found in the top bar under "Buying Guide" tab. See the pull-down menu and select "Camera feature search" (See a screenshot below). Select the type of camera(s) you are interested in. In the screenshot I've selected three camera types, which now show highlighted. Then click open the "Advanced Search Filters" and look for "Remote control". Check the tick-mark for it.

At this moment the search for compact and ultra-compact cameras with remote control finds 34 matches. It does not reveal the type of remote control, so you have to dig thru the reviews whether it is a wireless remote or wired, and what kind of control. Perhaps it would be good to also verify your findings from the manufacturer's support pages or camera model spec sheets.

A few samples picked up from those 34 search results: 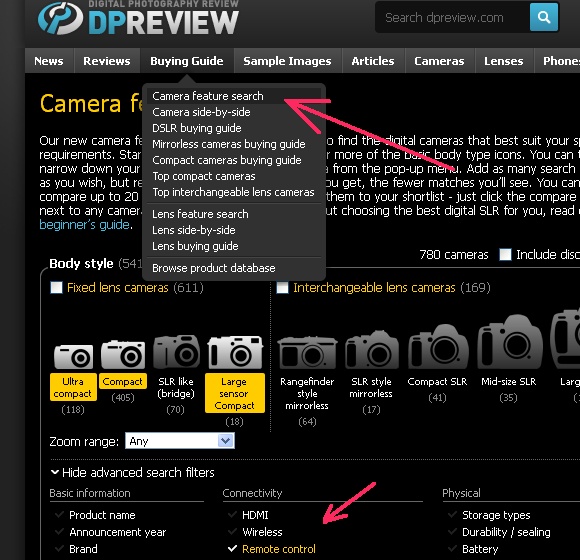 I have no connection to dpreview, I just have found this search tool so handy that I can recommend it to others.

Many of the Pentax compact cameras support IR remote. If you want a more rugged design, the Pentax Optio W90 has a waterproof remote available. For a more classic look, the Pentax Optio I-10 is a nice option and a remote is available. There are others as well, depending on desired features or taste.

I can't really say about other brands, though I'm sure that they have them.

We are both electronics and photography passionate, working in the last two years at a new generation wireless remote, Time Lapse, camera project. You can control the camera at max 30ft/10mt of distance, simply pushing a button on the smartphone.

Initially it was suitable for my Nikon D50, but we are also developing for variuos compact and reflex cameras.

Firmware tested so far on:

We make a smart device attached via USB to the camera for more control (beside we can use the simple shutter port). For example we can change ISO, Aperture or Time Speed directly from our Open Source Android app via bluetooth connection.

We are at the 3rd version, now Remote Shooter 3.0 is a smart device for Wireless remote shutter, time lapse and more, and it control wireless your digital camera from an smartphone Android app, tablet or a PC.

For specific needs (maybe useful for your wife), shutter release can be triggered from a simple shake (yes a simple shake) of the smartphone, or when a sound is detected from the phone mic (it's enough a clap or simply say "shoot!" or whatever), a text message and so on. The app for Android will be released as open source, fully customizable, with a large button for an example.

The project is the Pic-Ap-Board project.

2
How to use a wireless remote shutter release with flash?
2
What happened to pocket remotes for non-SLR cameras?
5
Are there adapters for mechanical film camera shutter releases to modern releases?
8
Are there universal remote triggers for digital cameras?
1
What is the 10-pin remote accessory terminal?
3
How can I find a camera with remote viewfinder and shutter (via phone or tablet)?
3
What are the advantages of a soft shutter release button?
7
How do selfie sticks integrate with digital cameras?
3
Can a Nikon D3500 shutter be released remotely without using the Snapbridge app?