How was this photo edited to feel vibrant and lush, but also soft?

I've been recently admiring this photo (histogram included as well) and was wondering if you'd have insight as to how it was edited, in ways I can try on Lightroom. I can see the histogram peaks towards the right and would guess the exposure's lifted, and I can see that the highlights aren't blown. Beyond that, I'm not sure. Do you think the blacks and/or shadows were changed? If so, which and in which direction? Same for highlights and lights.

I guess it's high-key but can't quite tell.

I assume the clarity was reduced, as well (but maybe sharpness increased?) – any thoughts?

Also, is there a tone curve you'd recommend to achieve this effect instead/in addition? 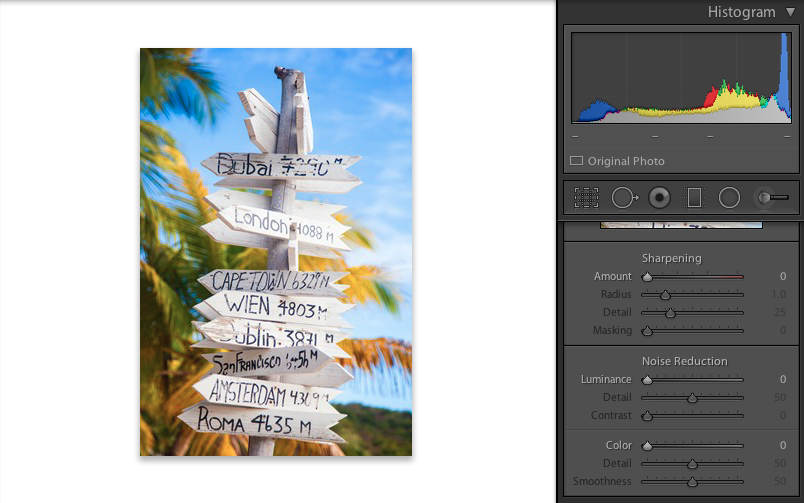 Without the original, it's hard to tell exactly what she might have corrected. Adjustments I might make to get an image to look like this are:

She also started with what looks like it was a good picture (composition, subject matter, and lighting).

When doing adjustments like this, every picture can be a little bit different, because what you're doing is representing the image using a little more than the available gamut. If you're not careful it will look hokey. But if you do a good job people can love the image.

The saturation was likely manipulated which is especially pronounced in the sky. It is possible that the shadows were lifted and blacks limited but its hard to say with certainty. It also is possible that sharpness was applied but that is very difficult to tell with the resolution and quality that was posted here. I wouldn't consider this a high key image. Overall I wouldn't suggest anything remarkable was done here in post processing beyond heavy handed saturation adjustments.

Here is an example. This image was shot at f/6.3, 1/80sec, ISO 100, with a CPL. The image on the left is the original, and on the right was edited to increase the exposure, fill light, contrast, and saturation: 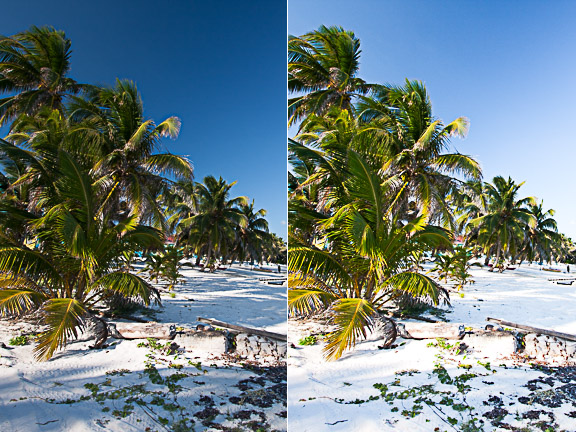 After creating the example above I decided it was a pretty poor attempt. But in any case I tried so I thought I'd share as it might help you.

I think the highlights have been made darker, but most importantly, contrast was dialed down. I guess -30 out of -50 with the Lightroom contrast slider. Increased saturation and possibly vibrance compensates for this, as the image would otherwise look grey. As mentioned by Peter Bright, the background looks like it's blurred in post processing too, perhaps with Photoshop's lens blur filter.

Not the answer you're looking for? Browse other questions tagged lightroom post-processing photo-editing light vibrance or ask your own question.

45
What does it mean for a photograph to be "high key"?

2
How do I read these two Lightroom histograms?
3
How could I achieve this soft-but-powerful-glow effect in post-processing?
7
Editing photos for this "milky" and "twinkly," vivid but nostalgic effect?
1
Getting this radiant but soft glow, without losing color intensity or looking overexposed?
3
How do I give my images this vintage travel photo effect?
3
Getting this 1950s-esque photo style in post?
0
What post processing was used for this rosy, vintage, and soft photo?
9
Is there software other than Lightroom that offers local Laplacian filters? (Or similar.)
14
What's the biggest difference between these two photos of large animals?