What is the "airy disc", in simple language?

In my understanding, this is relevant to photography because if you are shooting light of a certain wavelength (or primarily so, and such as: a blue scene), your aperture size can affect the sharpness of your image. It should also be helpful in determining the maximum useful sensor resolution, for a given sensor size. (that is: the smallest pixel size)

If you use formulas, which I expect you will - please also include a simple explanation (i.e.: "making the aperture smaller makes the first minimum of the airy pattern closer or further")

Please provide an easily understandable, but also relatively-complete understanding of the airy disc. What affect do these have: the aperture diameter, wavelength, distance from aperture to light source and sensor, focal length, etc.

Although Wikipedia speaks of the airy disc, it's not in simple language.

All optical systems produce a blurred image as a result of diffraction. On a fundamental level, we require a ruler to measure how much blur has occurred in a system. MTF, MTF50, and other measures are all "resolved" quantities mathematically. They are produced by taking an intensity profile and performing some mathematics on it. These methods cannot tell the "source" of blur, only that blur has occurred.

When you consider things like chromatic aberration, however, it becomes clear that things carry some dependency on wavelength, or color. As it turns out this is also true for the wave behavior of light. Blue light doesn't travel faster than red light, but it carries more energy per photon and consequently blurs less when it diverts its path around an aperture. (E=mc^2 after all, it must be more massive and thus have greater inertial).

In this respect, we use the wavelength of light as a ruler. More massive photons don't divert as much, so they stay tightly packed and produce a small, high intensity spot.

However, this is largely irrelevant to photography, as consumer lenses are simply too aberrated.

Here I present to you the spots from several lenses, as examined on an MTF bench. The lens is f/2.4 and covers a 120 degree field of view. As designed, it is diffraction limited (corrected to less than lambda/6 waves of aberration, lambda/4 is generally considered diffraction limited).

First we have an excellent spot: 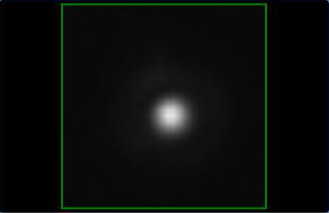 We may also see a disturbed optical system, i.e. one with some amount of misalignment. This particular sample has about a wave or so of coma on-axis. This is more typical of a consumer lens, since they simply do not cost enough to be designed and aligned to this specification (nor is it truly necessary). 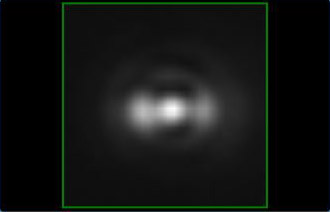 As another example, here's about a half wave of coma, but also about a wave of astigmatism. Not very pretty. 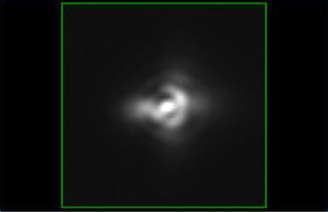 Here's the MTF of the three spots in the same order: 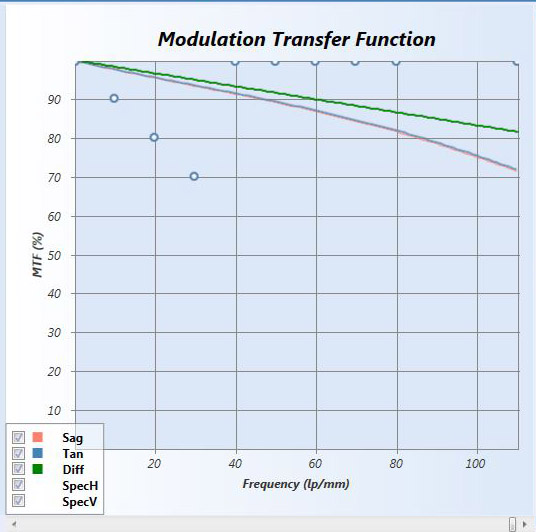 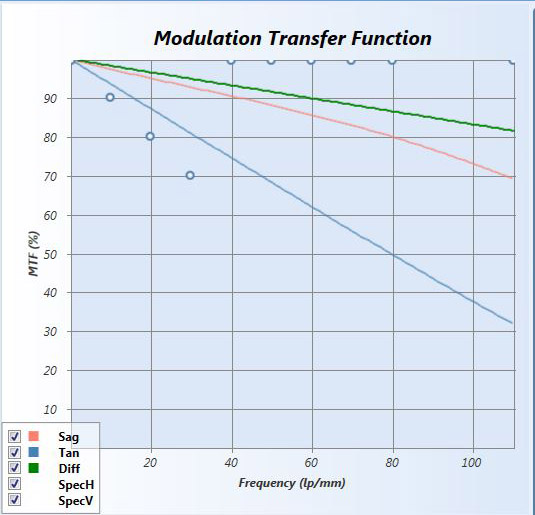 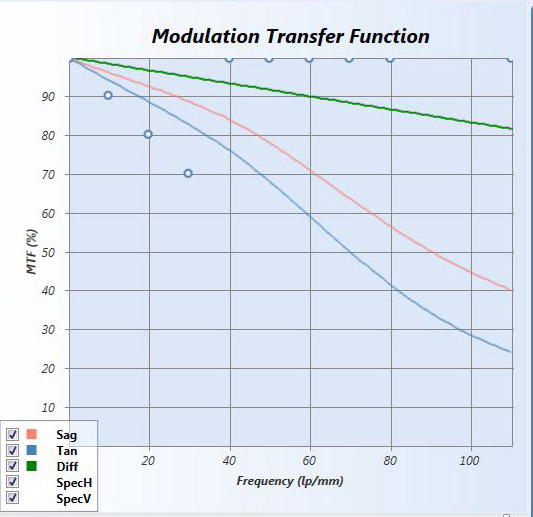 Now let's look at a consumer lens universally regarded as being super duper sharp and a lens that is a favorite of mine, the Zeiss 100mm f/2 Makro Planar. 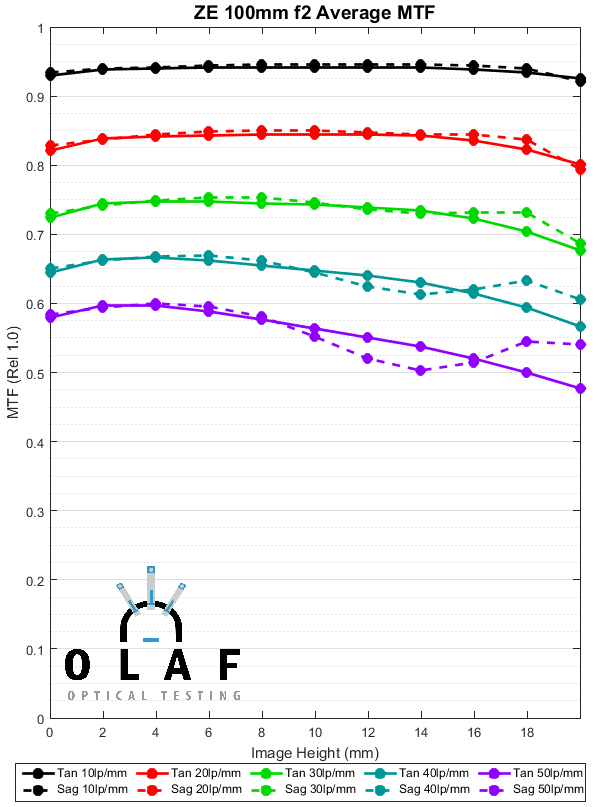 I apologize for the change of format. The big kicker here is that nowhere in the field of view does the MTF at 50lp/mm surpass that of the highly disturbed sample. It's at about 0.6 across the entire field, where the highly disturbed but perfectly designed lens achieves about 0.7 even in its worse plane.

Maybe in 10-25 years when consumer interchangeable lenses are designed as well as this $25,000 wide angle fixed lens will the airy disk matter in photography, but today it does not. 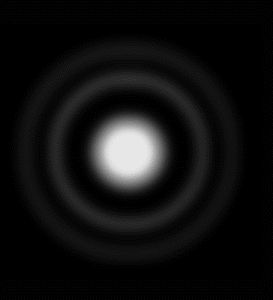 We all know that Light beams travel in a straight line (beam from the German straight like a tree trunk). We also known that sound waves bend around an obstacle. We can hear someone yelling behind a tree. You might know that water waves also bend around an obstacle. But did you know that light beams grazing a sharp opaque edge bleed into the path of light rays that just clear the edge of an iris diaphragm. We are talking about the blades of the lens aperture. We are talking diffraction (Latin to change direction).

The light that bleeds into the geometrical shadow of the iris illuminates the line of demarcation making the separation of light and shadow, indistinct. However this diffraction does more. The diffracted light beams interfere with the direct beams and form a series of interference bands that surround each point of light projected by the lens. What we see are concentric bands surrounding this point of light. These indistinct circles decrease in intensity and spacing from the central point. We can only see these bands if we examine the image cast by the lens with a magnifying glass.

We actually are looking at two phenomena, interference and diffraction. These intertwine to cause what we want to be a point of light too small to be discerned as dimensionless, to appear as a circle of light with scalloped edge. This we name “Airy Disc” (disk of light that we view in the air with the aid of a magnifying glass).

This was well studied by John Strutt, an English nobleman, 3rd Baron Rayleigh 1842 – 1919 Nobel laureate). The Rayleigh Criterion for lenses remains valid despite our best efforts. The resolving power of a lens is given as lines resolved per millimeter. This means we are able to distinguish a space between closely ruled lines. Resolving Power ( RP) = 1392 /f-number (different for each wavelength however photographically we use 1392).

Note: f/8 exceeds what is pictorially useful for photography.

Not the answer you're looking for? Browse other questions tagged terminology image-quality optics or ask your own question.

20
What is decentering?
11
What does IQ mean?
12
Can someone give a simple explanation of ISO?
8
Can the method from the paper "High-Quality Computational Imaging Through Simple Lenses" compete with conventional lenses?
1
Could someone please give simple explanation of "Principal plane" & "Nodal plane"?
7
Does sensor size impact the diffraction limit of a lens?
3
What is the light called that is outside the area of the capture medium?
1
What defines an "objective"?
0
What is the quality or characteristics of photos of different cameras or lenses called?
0
how to find best FX camera to avoid diffraction at small apertures