How do I read these two Lightroom histograms?

What information can I get from these two images about how a series of photos that shares such a histogram were taken/edited?

Both photo series are quite pretty and nostalgic, but I don't get the same effect in simply dragging down blacks and increasing whites, which would be my first guess.

Is it possible there are tone curve, point curve, clarity, or contrast changes, or anything else? What would I do to attain the same effect?

(from first pic below)

(from second pic below) 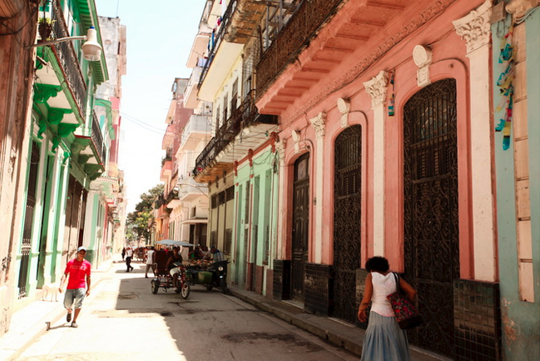 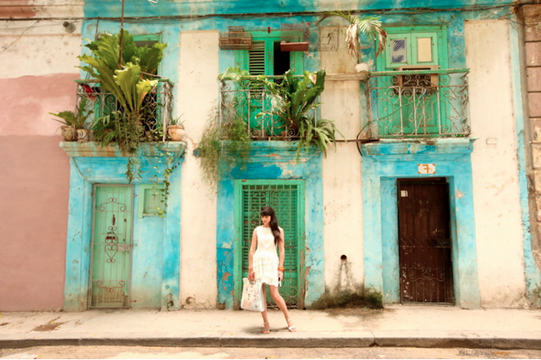 The first histogram tells you that you mostly have a lot of everything: darks, mids, and highlights. The darks are in the shade to the right side of the photo, the mids are the road and sunny-side stuff on the left, and the highlights are mainly in the street itself. The only standout is that spike of white, which is the nearly blown-out sky.

The second histogram just tells you it's a relatively high-key photo, owing to all that cream building front. It has very little pure white, primarily in that dress, and very little pure black, probably only in the window above the model. Because of the warm tone of the photograph, the yellows extend considerably higher into the highlights than the cool tones, which is where that big yellow patch comes from.

You wouldn't use the histogram to try and replicate this look. Lightroom histograms are about brightness and lighting, not about color.

Photoshop lets you break a histogram down into its individual color components. Doing so in Lab color space can be a useful way of affecting color. A common way to mimic the highly-saturated appearance of Fuji Velvia is to compress the a and b channels, leaving L alone, for example.

To answer your questions in your response to Warren, I'll repeat what Alex said above- given a certain histogram, you can't tell what processing was done to the photo.

Not the answer you're looking for? Browse other questions tagged lightroom photoshop photo-editing digital histogram or ask your own question.

1
Is it possible to reproduce a colour tone (of any photos) perfectly (by curves)?
4
How do you make a skin tone metallic brown?
5
How was this photo edited to feel vibrant and lush, but also soft?
3
How could I achieve this soft-but-powerful-glow effect in post-processing?
2
How do I give my images this vintage travel photo effect?
3
Getting this 1950s-esque photo style in post?
8
How do I get this oversatured-but-not, blown-out-but-not, subtly surreal look?
9
Is there software other than Lightroom that offers local Laplacian filters? (Or similar.)
1
How to Apply Luminance Adjustment Selectively in Lightroom or Photoshop
2
How can I improve my food photography?