What are the dynamic ranges of commonly available 35mm film?

I searched on google for a good chunk of time, but I haven't been able to find a reliable source of the dynamic range of many, if any, color negative films.

I'm curious about any/all 35mm films that are still commonly available, such as Velvia and Ektar - but I'd especially like to know about Portra 160.

What are their dynamic ranges?

Summary: not that good... much less than you expect.

One of the best sources of technical articles on the topic are from Clarkvision.com in my opinion, he supports his statements with math and physics (formulas are provided).

You can start here and read some other articles.

And keep in mind that film has usually more noise than digital.

Compare with a modern dSLR (APS-C) like the Nikon D7100 http://www.dxomark.com/Cameras/Nikon/D7100---Measurements or http://www.sensorgen.info/NikonD7100.html that measures about 13 stops if you look at pixel level (choose "screen" in the graphs from DxO).

Some more articles you may find interesting:

Edit: this was about color negative film, as requested. I was looking for data about BW films but I haven't found much. Details are surely better, I'm not sure about dynamic range.

Edit 2: this analysis by Clarkvision compares dynamic range stops of a digital camera with film using specifications by Kodak (that means averaging a 48 micron spot, check the link for more info):

The result is that (section "Derived Sensor Parameters") a Canon 7D Mark II at 100-200 ISO has about 18 film-equivalent stops. Good luck finding a film able to even come close to that...

Edit 3: if you downvote please explain in the comments, don't throw the stone and hide the hand please.

The answer to this delves into reading the data sheets for the various films.

For Velvia 50, the data sheet can be found here.

The relevant piece is the characteristic curves: 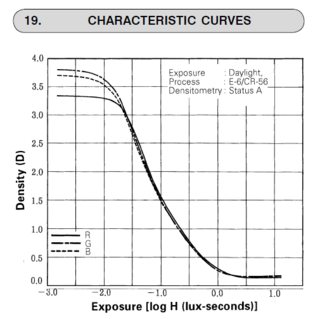 Now for some math.

And well, that's about what I'd expect from slide film. Velvia has a bit more, and one can certainly pull a bit more in the greens and blues from the deep dense parts of the film (where red flattens out), but that's what you would expect to get.

For negative film such as Portra, you would see the curves go the other way. 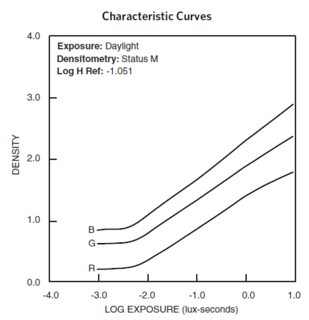 Here, we see a straight line range from -2 to +1 for a range of 3. That gives us about a 10 stop range. Note here that I'm less familiar with color negative film and how well that film responds with different densities in the negative. There's also the factor of what the print has for a dynamic range (not an issue with the slide).

However, that is an approximation of the dynamic range and how to figure it out for any give film. When you get to black and white, as seen in Tmax data sheets, there are an enormous number of variables - processing time and developer choice can give very different curves to the density of the film.

When we talk about the range of film we generally express this value in terms of f/stops. The f/stop is an adjustment to the working diameter of the camera lens. By tradition the f/stop is a doubling or halving of the exposing light. Thus if we say the exposure range of a film is 10 f/stops, we are trying to say: 2x2x2x2x2x2x2x2x2x2=1024. In other words, a 10 stop range can be stated as 1024:1.

The well-known zone system developed by Ansel Adams and his friend Fred Archer is based on a 10 f/stop scale. It is possible to squeeze more out of modern films. I think 13 ½ is about tops. However modern digital techniques sandwich multiple exposures, some under, some over, gaining a vast uninterrupted scale.

I can provide a partial answer through experience of previously using Kodak Pro Portra 160 and 400, with 400 being my favourite as it was a great all rounder. In my experience, the 400 had a higher usable dynamic range than my current Canon 5Ds. I would say at least 2 stops better.

The reason why I say this, is because, I very often used to overexpose by 2 or sometimes even 3 stops to mimic the dreamy magazine spreads and the prints kept the detail in the whites. I would say that in terms of todays RGB figures, they would be around 240. If I try that with my Canon 5Ds, 2 stops over would definitely mean whites hitting the 255 barrier and getting blown out.

What I take from this is that the Portra 400 was at least 2 stops better in dynamic range to the Canon.

Not the answer you're looking for? Browse other questions tagged film dynamic-range or ask your own question.

27
Why are these film photos brighter than digital photos taken at the same time with the same settings?
5
Should I continue to learn exposure on a film camera or switch to digital?

18
Is there a difference in dynamic range between film and digital?
4
Which film camera would be comparable to a Yashica TL Electro?
13
What is the purpose of the film leader on 35mm film?
6
Which DSLR macro setup to buy for scanning negatives?
7
Scanning negative 35mm: color accuracy, color balance, film bias
4
Why don't digital cameras have better dynamic ranges?
3
What companies across the world are manufacturing 35mm film, and where (as of August 2018)?
7
How do different developing fluids affect black and white film?
2
Better dynamic range with film