How do wavefronts/wavelets propogate in three dimensions, and why is this important for photography?

The photography book I have talks about waveforms, but it doesn't do a good job of explaining them.

So, here's my understanding from the book and google searches (it could be unbelievably wrong.)

In an isotropic homogenous medium, light will spread out in all directions, essentially forming a large circle/ball. About at peak amplitude for each oscillation, new wavelets form. Those wavelets form slightly behind the wavefront, and have a slight curl to them.

When those new wavelets form, they propagate in at least a semi-circular pattern. (that is, they don't go just straight-ahead.)

This curl is how plane waves form:

That curl is why a plane wave is able to form: otherwise, the new waves which are now perpendicular to and moving in the same direction as other waves, would slightly lag its fellow waves and be out of phase. The curl makes them lag precisely the amount necessary to be in-phase.

Do I understand correctly??

To those asking about its relevance to photography: This, I would think, relates to the effective size of a light source and thus the sharpness of shadows. It may also relate to polarization, and how to use a filter to effectively defeat it? I'm hoping the gentlemen that offered a good response can help clarify.

My book wants me to comprehend this, so I can comprehend what comes next; thus, I'm not yet fully sure how this relates. It's hard to move forward if I don't know what the next issues are built on.

An image from "The Manual of Photography" 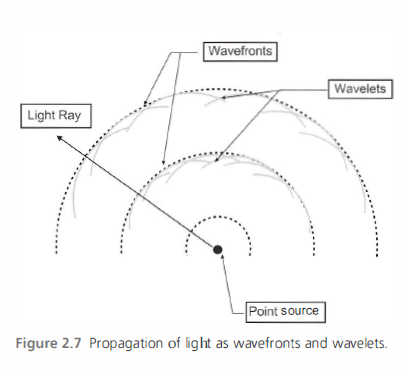 Okay, so, the first thing to understand is that the textbook¹ is trying to get you to understand a theory put forward by Christiaan Huygens in the late 1600s. It turns out he was (generally) right about the wave nature of light, but the actual specifics are iffy. Don't get too bent out of shape trying to make everything make sense, because... well, it doesn't. It was, however, a good enough approximation to work out basic rules of optics, and to be improved by later scientists.

Then, the second thing. You are, it turns out, very confused. :) There is no "curl" — in fact, the secondary wavelets can be thought of as full spheres. And we don't get to plane waves from this at all (I'll explain that in a second.)

Waves propagate out from their source in the same shape as the source. If it starts from a big, flat, plane in 3D space, you get a plane wave. When the source is a point in 3D space, you get a sphere. Huygen's idea was that, if you took such a sphere of light at a certain time, you could figure out where it would expand to next by pretending that each point around that sphere² is actually a new point source, and then considering the edge of the wavefront in the future to be the boundary of all of those spheres combined.

This is useful, because when the light is moving through the same substance ("isotropic homogenous"), it moves at the same speed, keeping its shape. But light moves at different speeds in different materials. Newton's model — light as particles — doesn't give a satisfying answer for why light bends when this happens. But this does! There's a great animation here, and here's a less-clear still visualization from Wikipedia: 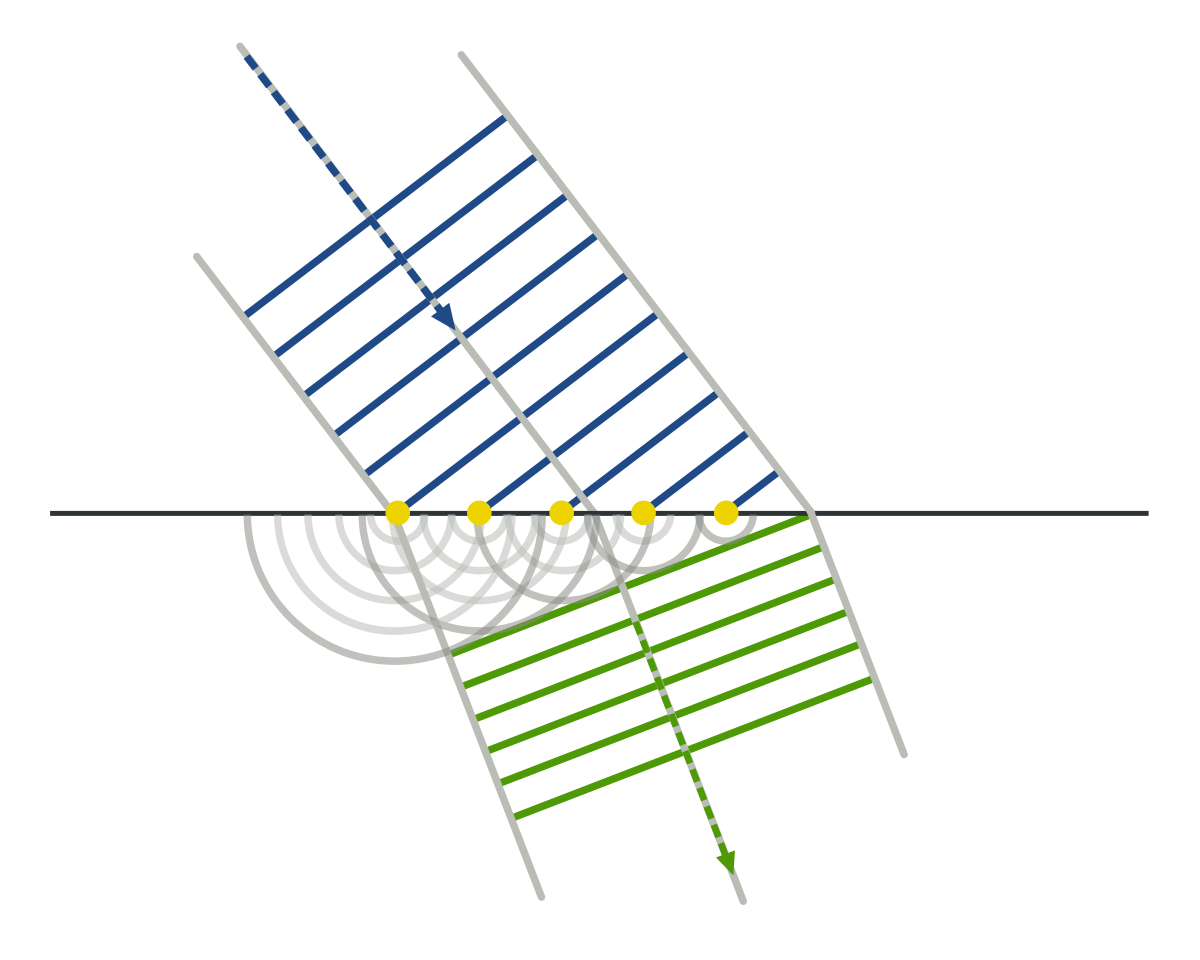 As the light hits the — let's say water — the "secondary wavelets" travel more slowly in the new medium. Because of the angle of incidence, the wavefront doesn't strike the water all at once. And if you draw a line across the front of all the little circles that do occur at the same time (in this picture, the first green line is drawn at the time the right edge strikes the water), you can see that the wavefront is now aligned differently.

So, this model demonstrates why light bends when it goes from air to glass, which is of course fundamental to photography as we've known it for the past two hundred years. But don't get too hung up on understanding the specifics of the actual wavefronts and secondary wavelets (unless you really need it for the test), because ***those are just the model, not really a correct representation of what happens in the real world.

This model also explains diffraction — how light gets bent around corners: 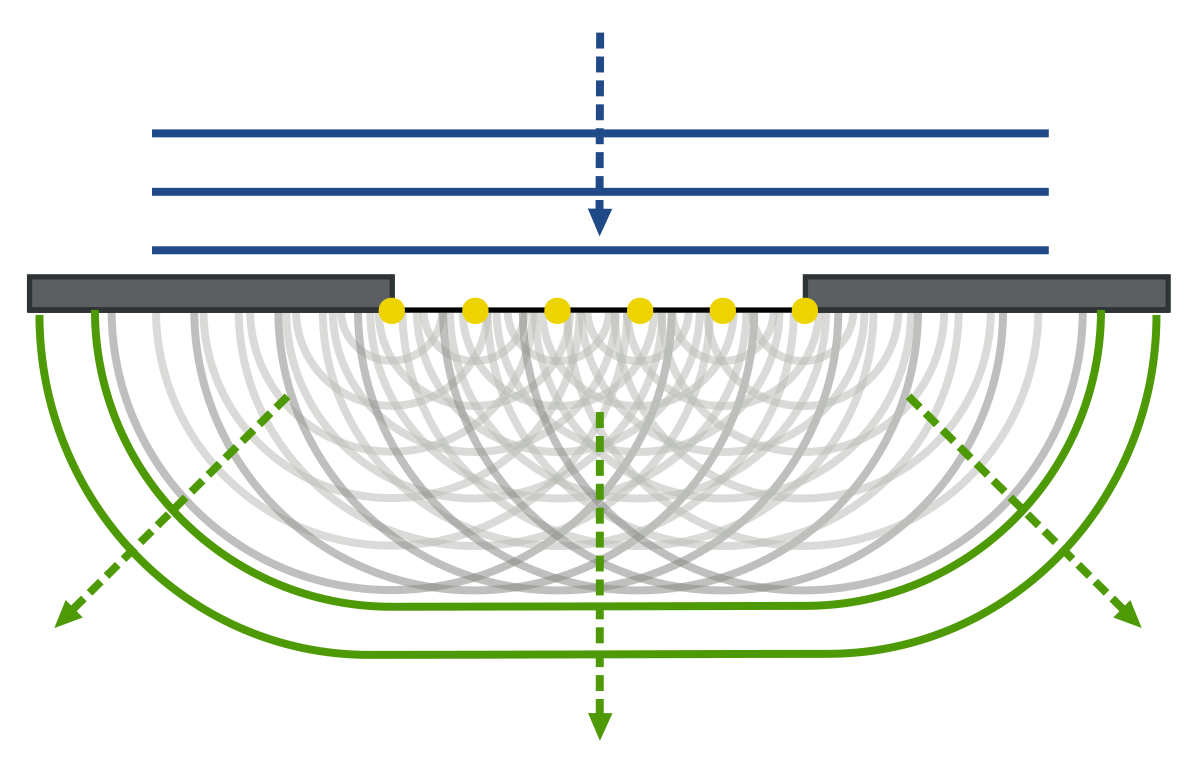 I think that's basically self-explanatory — the new (imaginary) point sources at the aperture give us rays going off in unexpected directions (making our images fuzzy).

And — plane waves. This isn't really specific to Huygens' theory, but a) a plane wave is easier to think about than a spherical one, which is why it's used in examples, and b) if you're far enough from a point source, from a practical point of view, you can treat the wave as plane wave — just as we know the Earth is a sphere, but because it's so big, we can treat the ground as flat for most purposes.

So, finally, how is this relevant to photography?

So, finally — do you need to know this to take photographs? Absolutely not. You don't even need to know more surface-level explanations of why refraction works — just the very basics of "hey, a lens focuses light". But, I think that knowing these things can help understanding in a wide variety of photographic situations. That's why there's a "theory of light" section in your textbook, after all (even if it is a unfortunately confusing).

2. And there are an infinite number of points, which the diagram does not make obvious

Not the answer you're looking for? Browse other questions tagged optics physics theory or ask your own question.

67
What is a "diffraction limit"?
7
What's the technical difference between artificial and natural light?

2
Is there such a thing as a filter for circularly polarized light for photographic use, and what would be the effect of using one?
10
Why is the focus distance for a mirror image further than the surface of the mirror itself?
4
How can I get the image/sensor dimensions in mm to get Circle of Confusion from EXIF?
1
How do I know how much light will be needed for a given film speed, shutter speed, and aperture?
3
Why Isn't This Photograph Pin Sharp?
2
Lens/Mirror system for stereo photography?
2
Where can I learn the theory behind photography and camera engineering?
2
Why is low chromatic aberration considered important in the digital era?
1
Longer or shorter focal length for good IQ for low light portrait photography?
2
Why does light-colored skin look different in black and white versus digitally desaturated versions of color originals