When I travel I take photos of a variety of subjects like waterways, buildings, cultural events, the local people, landscapes, conveyances, nightlife, myself and my wife, things I see around me -- pretty typical stuff. I rarely plan for photographs. Instead I just take the best shots I know how at the moment that I want to record a memory or otherwise see something beautiful.

What I'd like know is what recommendations do you have to make travel photos more compelling? How do you move from moderately interesting shots to something really engaging? Are there photo principles that apply especially to travelling? How do you increase the likelihood of catching something really special? Are there any recommendations on post-processing hundreds or thousands of different subjects?

The thing about travel is, you are someplace unique. The thing to do is figure out just what is unique about where you are, and try to capture some aspect of it that means something to you. For instance, in Amsterdam I saw bikes everywhere so I tried to get interesting shots involving bikes: 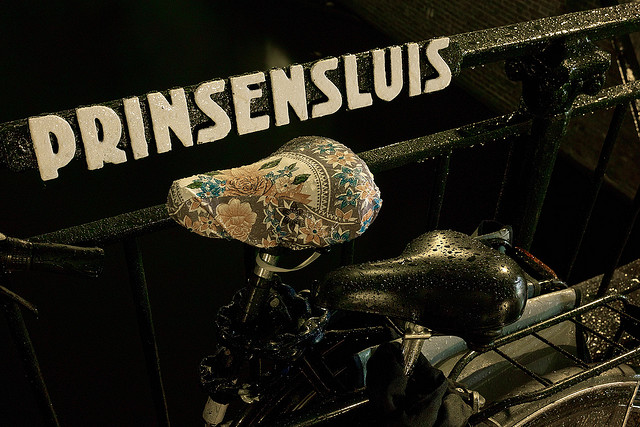 The other thing to think about is that other people generally have an idea about what a place is. So you can either try to show something similar to what everyone knows a place is about, but with little twists - like this shot of the many buildings of Hong Kong across the water plus the famous sort of boat they have, I bought a flower from a street vendor and carried it around taking pictures: 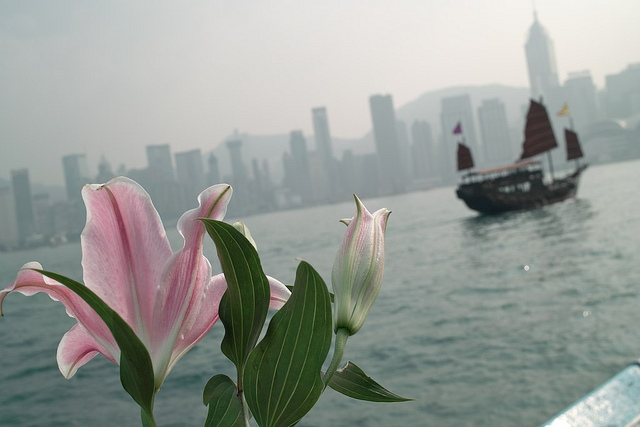 Which is a great way to meet people by the way. People love anyone with a flower!

Or, you can just try to go for the most nicely done canonical shot of the place you are at, so people are just excited to see a really good example of what they are expecting. For me Venice is canals and boats and I tried to find a nice atmospheric shot that would instantly say Venice to anyone viewing: 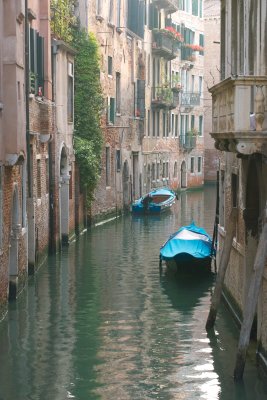 I think it's also a good idea not to review too many images from the place you are about to travel to, so you don't get too stuck into thinking about getting a few particular kinds of photographs from a place.

Looking at reference works like NatGeo or CNN Travel, there are two things that stand out as far as compelling photography: Things we don't get to see at home and places tourist don't tread.

Things we don't get to see at home tend to be, unfortunately, shot by most tourists and thus are cliched. Be it lederhosen at Oktoberfest, an untoucheable in India, Babushkas in Moscow, etc. This includes all the landmarks that are the cornerstone of most travel photography. I tend to avoid landmarks for a simple reason: it's been done, and much better, by hundreds of people before me. As a record that I went there and saw it, sure, I'll take a picture. As something I'll actually show other people? No way.

Things that tourists tend not not to see are a lot more interesting. Early morning spice markets in India, salaryman karaoke in Tokyo, kangaroo hunting in Australia, etc. A lot of these things happen early in the morning or late at night, just like they do in your hometown. Your unfamiliarity with these things is a both a disadvantage and an advantage. You don't know about a lot of them, but they're fresh and exciting to you, you're not bored by them. It's also a great way to have adventures instead of just sightseeing.

Really, there is no fundamental difference between travel photography and shooting at home. After all, you're still the one taking the pictures.

A series of posts by Peter West Carey on Travel Photography has just concluded at Digital Photography School. These covered a variety of different subject categories that could be aimed for when taking photos while travelling. These were:

These often feature the concept of trying to interpret these subjects and determine what makes them different in the current place. Including the local context makes them more interesting for the desired audience (e.g. someone who is not familiar with the area).

Also trying to hit all of these subjects gives you a very rounded portrait of an area, including the landscape, the people and the culture.

When I am going someplace new I always try to get in contact with a few people from the area (the internet is such a great tool for finding people to reach out to). My goal is to be able to ask half-a-dozen (or-so) locals the following question:

"What's the most amazingly visual thing you can think of in your area that nobody else knows about."

Not all of the responses pan out, but I always end up with a few 'hot tips' for really unique photography opportunities when I do this. I also make some new friends, which has come in really handy on any number of occasions in my travels...

The other thing that I've gotten a lot of 'mileage' out of is the notion of taking my camera and just walking around a place for a whole day... I mean a whole day... Sunrise to after dark. It's absolutely amazing the amount of cool stuff that can be found when you're just... walking around... with your eyes open to the possibilities of a place... With no particular place to go, no particular thing to see, and no particular schedule to keep. I will say this: this is more of a 'single persons' tip... I was able to do this much more frequently before I got married... and I expect that I'll have to set aside the practice completely when my daughter arrives in March. :-)

All good answers here. Travel photography is all about seeing things in new ways but our background captures us and prevents us from seeing things differently.

As an example, a geologist friend took photos while travelling in South America and India. It came as no surprise when his photos overwhelmingly showed stone artifacts and few people.

The second problem is that, even without thinking about it, we have an implicit audience for our photos, which shapes our photography.

A good example was a recent tour by the China Photographers Association. Their exhibition was a stunning collection of all the best known tourist sites in China. But they were nearly empty of people. And if you have travelled in China you will know that the lively, bustling, crowded cacophony of people is the overwhelming impression.

So good travel photography means breaking free from your background to allow fresh new insights. It also means understanding what is challenging and interesting to your likely audience.

Edward De Bono's book, The Six Thinking Hats, is a widely used tool, in management circles, to generate innovative approaches to problems. The approach of consciously donning different thinking hats is a powerful way to renovate one's thinking. What I am suggesting here is that you make a practice of consciously changing your thinking hats during your travel photography. This will break you free from being captured by your background.

I think looking at other people's photographs really helps to get inspired. When you are a place you might remember a particular photo you saw and liked and you try something similar.
However, I agree with Kendall that you should not look at too many pictures of that exact place you are going to visit. A bit is good, but too much just kills your creativity and open-minded-ness, IMO.

Taking the time to think about the subject before you take the shot is always a good idea. Don't just always take the shot from where you happen to stand at the time something catches your eye. Try different angles and techniques. Quality over quantity. Of course, don't overdo it and be sure not to stress your travel partner's patience too much. If you're unsure if your experiments will turn out well, just take the typical postcard shot, too. Just in case.

I try to tell stories with my pictures, so I also try to capture pictures that document the day in a way I experienced it. Don't be too fixated on photographing only the obvious tourist attractions. Capture moments, paths you walk, streets, little details, people etc. Try to get a variety of subjects. (I think that's what you do already, and I think it's a good approach).

When it comes to post-processing, I apply star-ratings first (I use Apple Aperture and before that I used iPhoto). I narrow down the photos bit by bit until I have a reasonably small amount to choose from for the final selection. At the end of the rating process I try to have a variety of subjects and compositions that tell a story. I set myself a limit of max. 3-4 shots per subject.
Then I pick my final selection which narrows it down to the essential shots.
After this I start processing and correcting (if needed) the photos from this selection. All other pictures stay untouched.
I find that rating pictures is a relatively quick process and a good way to get through hundreds or thousands of pictures.
If you want to upload and share pictures while still on the road, I can recommend shooting in JPEG or RAW+JPEG. Using JPEGs shortens the whole post-processing workflow and so it's easier and quicker to share pics online.

Personally, I think photographs look more captivating when zoomed in. This is a shot I cropped in a little tighter than usual in order to cut my wife out completely. It went over so well that now I am ordering 4 prints for all the family members that wanted it blown up for framing. 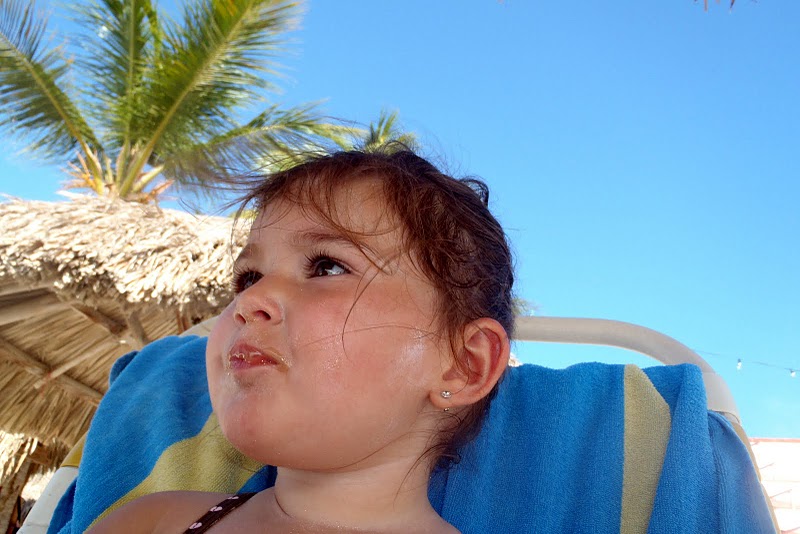 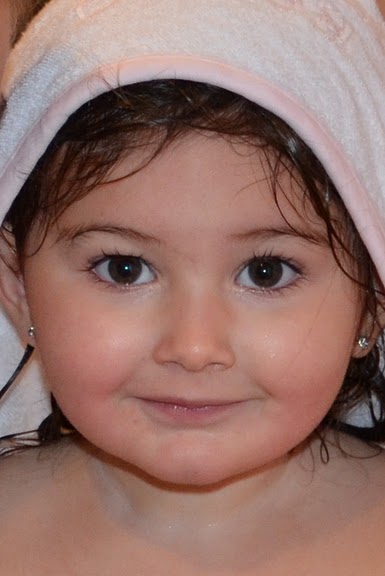 Not the answer you're looking for? Browse other questions tagged travel or ask your own question.

6
In what situations should I use which lenses while traveling to Paris?