Why do XnView and Exiftool's EXIF orientation tags differ?

While checking an image I noticed that XnView reads its EXIF orientation tag as left-bottom(8) but Exiftool reads it as Rotate 270 CW.

Reading a bit on the subject, it seems that left-bottom(8) should correspond to Rotate 90 degrees CW rotation, but I could be wrong on that one since I am still learning on the subject.

What would be the correct value and why do they report it differently?

Both programs are showing you the same info. If you add the -n option to your ExifTool command, it will return an orientation of 8, the same as XnView.

Read further down on that page you linked to the "EXIF Orientation Value" chart. When it says "left bottom", that doesn't mean that the left bottom corner is supposed to be the top left corner of the image, which would be a 90 deg CW rotation. An orientation of 8/Left Bottom means that the first row of pixels is the left side of the image and the first column of pixels is the bottom of the image. They do it this way because the orientation tag isn't only there to tell when images need to be rotated. The orientation tag also allows for mirror images.

If you notice on that chart, the values of 2, 4, 5, and 7 indicate that the image is "flipped" or "mirrored" (the term ExifTool uses).

These orientations are rarely used, at least I've never seen them used. Though I can think of one situation to use them. If you were scanning slides or film negatives and saving them as jpgs, for example, and put them in wrong, you could use these orientation tags to correct the images without having to deal with recompression.

From what i see in the mentioned webpage the orientation, reported by xnview is correct. The position of the camera with upper left position of shutter button is 90 degree CCW (or 270 CW). See the image: 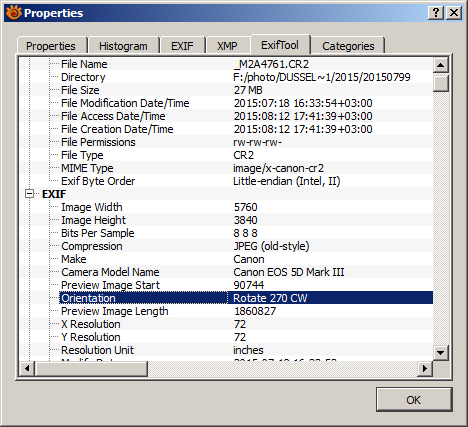 BTW I use XnviewMP, maybe your version is not updated

Not the answer you're looking for? Browse other questions tagged exiftool or ask your own question.

1
Why doesn't the Nikon D90 record ISO in EXIF?
4
Search large collection of images for exif tags without lightroom/aperture etc
4
How to remove EXIF person tags created by Picasa?
3
What does the exif ICC profile date mean?
1
Writing missing/incorrect Date Tags based on FileName in ExifTool?
1
Using exiftool to import date, gps and tags from xmp files
1
Why might an EXIF DateTimeOriginal be later than photo capture?
1
How do I use exiftool to strip all exif tags except rotation?