I like taking landscape/architecture shots of places at night such as the Golden Gate Bridge.

I've looked and found posts like these that talk about techniques on improving images from a non-FF camera but I still have questions relating to night photography, in particular my shot.

1) The link above mention difference techniques.

Shooting multiple images, whether at varying exposures (HDR, Exposure Fusion, etc.) or at the same exposure (Image Stacking, Median Blending, etc.), and then combining those images is another way to approach the problem.

In terms of removing noise is Median Blending (MB) the best technique for my shot and related or does it vary depending on what I'm shooting? I know that HDR and Exposure Fusion's goal is to increase the DR of the camera by bracketing but I doubt that's useful for my shot, above, or would you recommend some other technique?

2) For shots where something is lighting up the image already, like a bridge or city shot, is there a suggested max shutter speed/time? I've noticed that as I have a longer exposure the effectively black sky turns a dark shade of blue. (I'd post links but since I'm new here I don't have the rep to.) Similarly for the bridge shot, I get a "ring" of ambient light that is unnatural? Does that make it a "natural" shot or is that the feel of what you want in the image? How can I fix the light gradient above the bridge in particular.

I realize that the ISO is causing some of the noise (1600) but that was when I was learning about night photography and forgot about turning that down.

EDIT: Would post more references links too but sadly I can't due to low rep.

Try about ISO 200 @ f/8 for 30 seconds and work from there. That's three stops slower ISO and 4 stops (and change) slower aperture, so that is seven stops slower than what you used. Since some of your highlights appear to be slightly blown, lengthen the shutter speed by only six stops from 1/2 to 30 seconds for your starting point. If you haven't already, learn to use the histogram to judge exposure, rather than how bright it looks on your LCD screen.

Because the two towers of the bridge are at rather dissimilar distances, you need to use a narrower aperture to increase depth of field. This will allow both to be in better focus.

To reduce the noise use a lower ISO and a longer shutter speed. This will necessitate a very stable tripod and a way of remotely triggering the shutter. A wired cable release usually works better for longer exposures than an infrared remote that often limits use of available camera features. The wired remote usually allows you to set the camera the same and use all of the features available using the built-in shutter button. Try to shoot when the wind is not very string, as that can cause camera movement on even the best tripods.

The main reason the color of the sky is off is due to the type of lights illuminating the bridge. They appear to be very narrow spectrum sodium vapor lights. Trying to correct for them so the bridge is the right color will make the sky very blue, rather than black. Using a color temperature/white balance that is correct for the sky will make the bridge very orange or even yellow. Leaving the shadows/sky darker will help. You can do this with light curves in post processing, but creating separate layers for each area and correcting each for exposure and white balance independently should yield better results for an advanced editor.

Here's a scene I shot a couple of years ago: Due to many of the lights cycling on and off every few seconds as well as the water flowing very rapidly out of the discharge chutes under the power house I used very high ISO and wide aperture in order to allow shorter shutter speeds. It was also very windy that evening. All of the shots I tried at lower ISO, narrower apertures, and very long shutter speeds fell victim to camera movement caused by the wind. The first image below is an HDR image that combined two shots exposed 3 stops apart. ISO 5000, f/2.8, for 1/30 and 1/4 seconds respectively. Global adjustments only in processing. I raised exposure 0.17 stops in post, as well as reduced contrast, pulled down the highlights and raised the shadows rather aggressively. Notice the more modern lights over the lock on the other side of the river than show up a more neutral white color. I probably should have backed off the color saturation a bit more in the HDR module as well. At least in my case, I don't think HDR really helped much in this scenario. 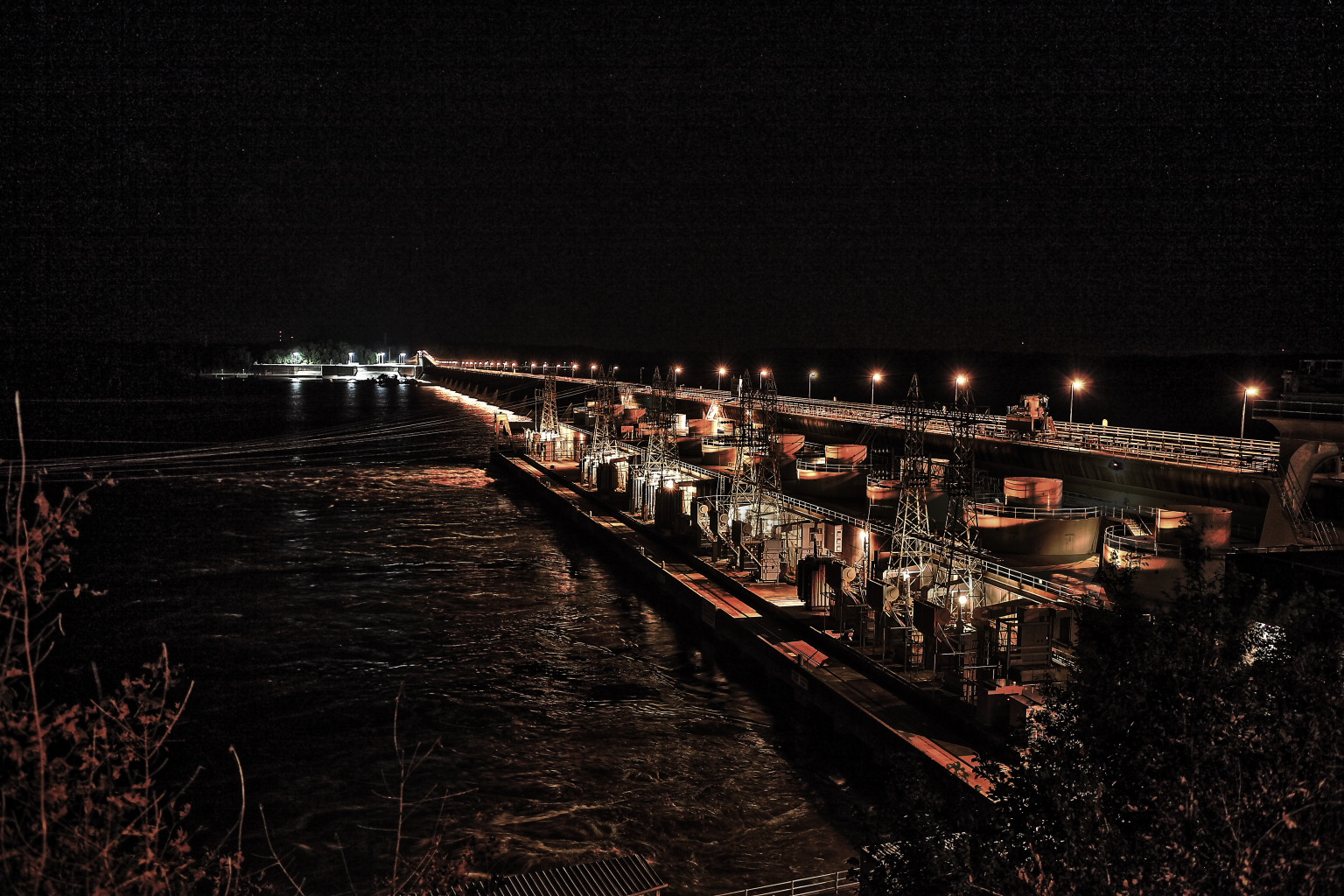 The same scene from a single long exposure. ISO 160, f/8, 8 seconds. Notice the trees in the lower foreground that were being tossed to and fro by the breeze, as well as the blurry water discharging from under the power house. I adjusted the color temperature cooler at 2700ºK and also used less color saturation. Notice the brighter lights over the lock across the river have a very blue tint to them, but the orange sodium lights are a lighter shade of yellow rather than a deep orange. I raised exposure 0.17 stops in post, as well as reduced contrast, pulled down the highlights and raised the shadows rather aggressively. The increased depth of field by using f/8, rather than f/2.8, makes the entire scene (other than the wind tossed trees) look better. 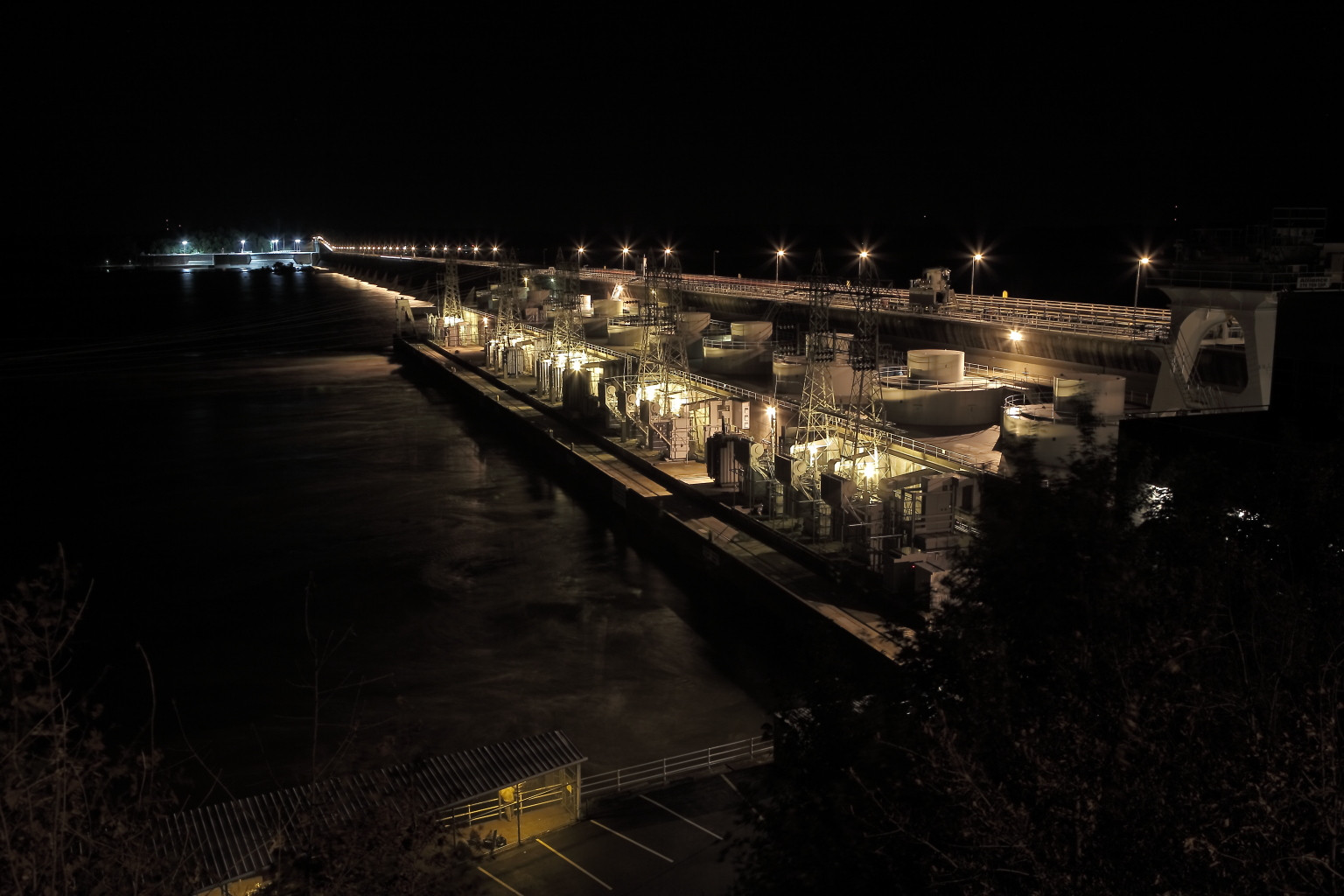 As far as HDR versus stacking images all exposed at the same E.V.: HDR processing can lead to increasing the perceived noise along with the increased edge detail. Stacking tends to neutralize shot noise, which is more influential in long exposures. It doesn't affect read noise, more the concern in shorter exposures, much either way.

Use ETTR techniques. The unnatural appearance of brightening will go away when you correct the exposure back down to the right level, but will have less noise.

Using lower iso and longer exposure will give the same appearance (with less noise) and not show the unnatural brightening.

Multiple exposures stacked together will reducr noise and you can throw out any with movement or transient events. Use a remote release to avoid touching the camera and further improve stability.

Control the brightness of areas within the frame separately. That is, you may want to bring out something from the shadows but leave the sky and other areas dark.

PS. That lens, I have found, is not very good "wide open". You might try f/4 to see if your pictures are better.

Not the answer you're looking for? Browse other questions tagged post-processing night noise-reduction or ask your own question.

13
Do I need a full-frame camera for low-light photography?

12
Why aren't my night shots sharp even when I shot at ISO 100 on a tripod?
5
How do I avoid so much noise in this HDR image?
5
Why am I getting such high noise when using ISO 320/640?
7
Using photoshop for night exposures with very high contrast
8
What post processing should be done to my photographs of the aurora borealis to improve colours and impact?
4
Does median blending / image stacking result in better or worse results than a long exposure?
8
Why are the trees in this long exposure night shot red?
3
Combining multiple exposures
3
What's worse for post-processing blurriness, graininess or softness?