What is Ansel Adams' “Zone System”?

I've heard much of Ansel Adams' Zone system, but I've never quite understood it. What is it, how and where is it used, and is it still useful with modern (digital) cameras? Thanks!

The basic rule: All photometers are metering the exposure base on middle gray.

Let's say that you have a scene with only middle gray luminosity colour; if you base your exposure on the meter reading for an area of this scene, the picture will be exposed just as you saw it.

Now let's say that you have a woman wearing a black dress, on a black background. If you calculate the exposure based on the meter reading for this scene the resulting photograph will be a grey dress and a grey background, because the metering is giving you the exposure as if you metered on an area of grey! To correct this exposure you need to add -2 stops.

The same thing happens with white. Let's say that you have a woman with a white dress, on a white background. The metered exposure will give you a grey dress on a grey background, because again the metering is giving you the exposure for a grey subject! Add +2 stops to get the correct exposure in this case.

It's up to you to decide what is black, what is white and what is grey, and to make the final exposure.

What does that mean? Let's say that you have any normal scene. In that scene you have highlights, you have shadows, and you have other areas of middle tone.

Suppose you have a scene with two women, both wearing black dresses, in front of a white background. One of the women is under a spotlight, the other is in shadow. It's up to you to decide which woman will have the black dress in the final exposure, as you can't have both exposed to be black due to the differing lighting conditions. The full luminosity range of the picture is the zone system.

The example photos below are from the Olympus OM 4Ti manual.

This example uses white subjects on a light background. If you just meter the scene as it is, you get gray results:

But you decide that you like to make the subject(s) white. You make a spot metering on white and add +2 stops and the results are much better: 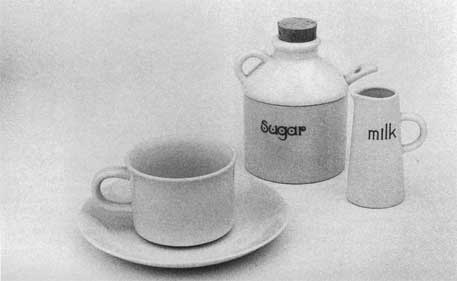 This example uses black subjects on a dark background. If you just meter the black telephone and take the picture, you get a gray telephone:

You decide that you wish to see it black, so you take a spot metering on the black spot on the telephone and you add -2 stops. The result is a real black phone: 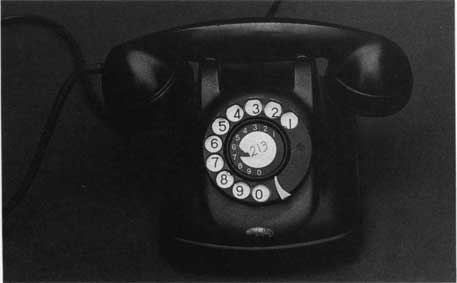 This example uses a more typical scene with a full range of luminosities.

Here you have too many different points of luminosity. If you decide that wish to get a picture such that the woman's dress must be white, then you make a spot metering on white and add +2 stops.

With Olympus's multi-spot metering, is it easier to get a better exposure. You take 2 spot measurements: one on the blouse, and one on the woman's skin color. This results in a good average exposure, with a white blouse that is not too bright, and a good luminosity of the woman's the face: 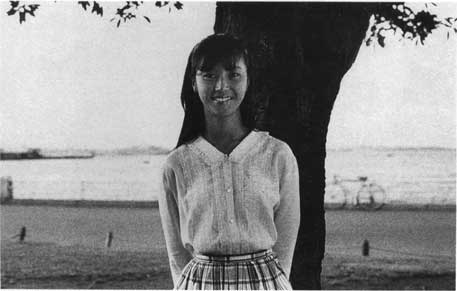 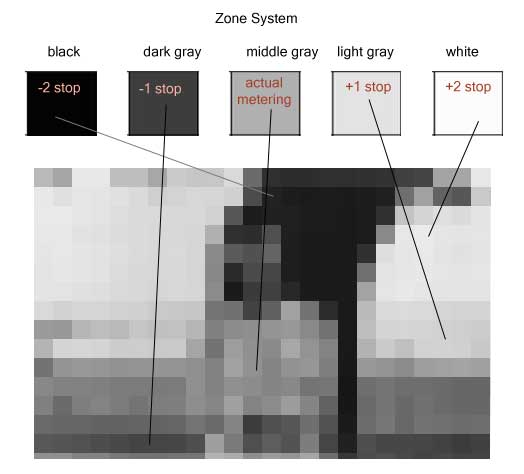 Note that in this example, the woman's blouse is determined to be middle gray. In the previous example it was an average metering, not a white blouse metering. Do not confuse the last two photos with the white blouse I am writing commenting on.

and is [the Zone system] still useful with modern (digital) cameras?

Yes, of course it is. The metering is the same, the scenes are the same, the technique is the same. I will say it again, if modern cameras had multi-spot metering then we would have a real tool for correct exposure.

Not only do digital cameras use the same technique, but Adobe Photoshop also uses the same technique. Almost on all correction on the images you have seen the 3 eyedropper tools. If you do not know why they are there, I will tell you: they are there to help you correct the zone system of your photos. Look at this example, and try for yourself to find out how to use them: 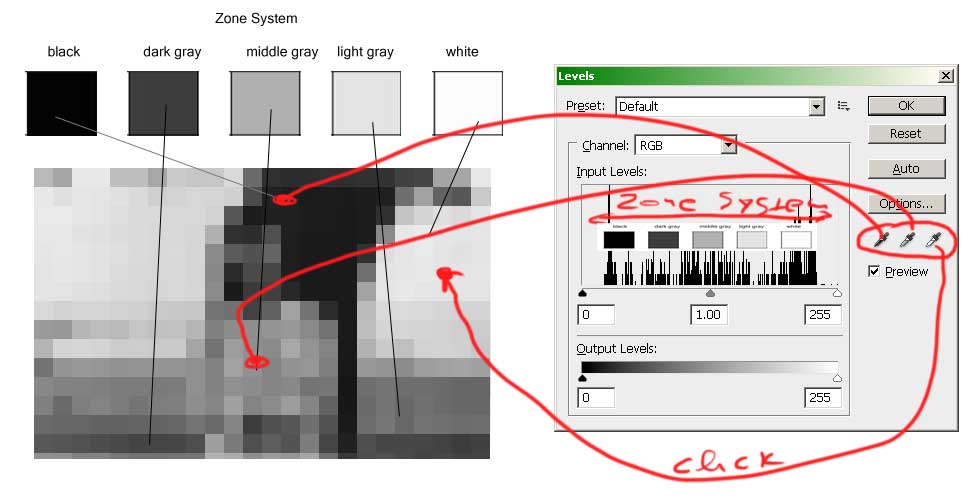 Aristos' answer is incomplete, as the true power of the Zone system lays not only in effective spot metering (what Aristos described), but in the compression and expansion of the tonal range in development. I can't reply to posts, so I'll piggyback on his.

This is what a zone scale looks like (ignore the gray scale values):

By default, most B&W film will render the scene before us more or less as it exists. If there's a 1 stop difference in light between a highlight and shadow, that's what we'll see. But what if we'd like to boost that difference? Make the lighting more dramatic? We can do it in post processing, or we can do it right on the negative using the Zone system.

Black and white film can be overdeveloped for an effect knowing as pushing. It's a darkroom technique often used by photographers to compensate for underexposing film, and you'll often hear photographers say, "I shot my ISO 400 film at ISO 800 and pushed it." That means they underexposed their roll by a stop and overdeveloped in an attempt to get a usable image. In practice, this develops the upper zones and leaves the lower zones alone, the science behind that is waaay out of the scope of this post. In effect, it changes the even tonal scale and increases effective contrast.

That might sound kind of complicated, so I'll give you an example:

Imagine you have a tree stump that we want to be a nice, brilliant white while the leaves on the ground should be dark, something to create a mood. We meter our leaves (per Aristos' example) and get a reading of 1/60 f/8. Since we want them to be dark - Zone III - we reduce our exposure by two stops and get 1/125 f/11 (one stop from each). That's going to be our exposure.

We want a bright, brilliant tree stump (it's a birch) so we meter it as well. Since we have a reading for our Zone III (1/125 f/11), what we're looking for is how many zones away our tree stump is. It meters to 1/125 f/11 - 'ah, so it's the same as the leaves' you think - but not quite. Our meter reads everything as Zone V, so it's actually 2 zones away. That's not much of a distance, and we want it to be all the way in our bright, brilliant zone - Zone VII. So we make a note that this image needs a bump from Zone V to Zone VII.

Open the shutter, expose, we have the image on film and it's off to the darkroom for the final step.

Now, the film needs to be overdeveloped long enough to push Zone V into Zone VII. Again, this is because film development is an uneven process: shadows get developed first, and once they're developed they stay in their place. The higher up you go on that zone chart, the more time you need to develop, and the more "movable" the zones are. In effect, you're just scrunching up the higher zones like so:

In reality, the Zone system is a lot of work. Every film with every developer gives a slightly different result/effective speed. You need to calibrate your exposure, check neg densities, do everything exactly the same time, and time and time again. It's also a system that thrives on large format, since you shoot every image on a different neg and develop each of those individually. The large negative also helps with the increased graininess that comes from pushing film. Most photographers I know who use the zone system shoot two negs: they develop one according to their charts, then they develop the second neg based on their results with the first one.

Does this part of the Zone system transfer to digital? Sort of, but not really. Digital does much better in highlights than in shadows, and it's better to overexpose a scene then push it down in PP. Knowing how your camera records exposure is great, but remembering stuff like this is one of those times when I am really happy with the digital revolution.

It's important to realise two things. Firstly, Adams was exposing single sheets of film in his view camera - not rolls - so he could vary the development time per-negative, and secondly he pretty much always printed on the same paper, with the same gamma and tonal range. So his zone system was a quick way of mapping the tones in the picture that he wanted as 'pure white', 'pure black' and all the zones in-between onto the final print, by varying both the exposure and the development time of the negative. So by under- or over-exposing, and marking the single undeveloped negative appropriately, he could he could develop the negative to pretty much the optimum darkness without having to constantly inspect it under the safelight. It would have the correct tonal range for the paper he knew he was going to print it on, and from there it was 'only' a matter of tweaking the final print, at which he was also a master. It was his desire to consistently map the tonal range he was interested in, and 'pre-visualised', as he put it, onto his favourite paper, led to the zone system.

As others have said, it's not directly applicable in the digital era as there is no negative, just a raw file whose curves can be adjusted at will. But his basic insights about pre-visualisation, of actively deciding what tones in the photo will be pure black, pure white etc. in the final print, and both exposing and post-processing accordingly, are still valid.

Here is another introduction to the Zone System from Luminous Landscape. And here is a simplified introduction for the digital age from Norman Koren which I bookmarked some time ago.

Not the answer you're looking for? Browse other questions tagged exposure zone-system ansel-adams or ask your own question.

34
What situations are best suited for spot metering?
34
How do I use spot metering?
26
Do ND filters increase the dynamic range that a camera can 'see'?
11
What is the EV scale?
11
How to choose the correct exposure?
7
Pentax P-TTL: Why and when does underexposure occur and what can I do?
7
Is it worth upgrading to more expensive software for B&W processing?
0
Technical book about exposure
1
Is there software that can calculate the range of zones in B&W photo?

26
Is the Zone System useful with a DSLR?
1
Photography concepts using SX20
15
Why should I use the Zone System when the histogram gives me all the information I need?
8
How does TTL flash work in manual exposure mode?
4
Are Ansel Adams's theory books relevant today?
4
Can anyone identify this (allegedly) Ansel Adams photo of an ornate interior?
12
How do the 11+ stops of dynamic range from a modern DSLR fit into the 10 stops of the zone system?
2
Tips for proper exposure using center-weighted metering
1
Why did Ansel Adams say reflective metering was more common than incident metering?
0
How to find the dynamic range of a scene (not camera sensor) from a photograph?