What is the surface area of a roll of 35mm or 120 film (for calculating the amount of fixer to use)?

Frequently I see specs on fixers like: 1L working solution will fix 1 m^2 of film. This is not terribly helpful for me as I don't know the area of 35mm or 120 film. So, can someone please summarise:

A 35mm film has an image size (exposure area) of 24*36 mm. Generally, you have a 2 mm gap between two consecutive image and about 5 mm on each side for the perforation. As the fixer will react on all the film, all the surface has to been accounted for. The holes should be taken into account too but you probably won't see a difference if you don't. 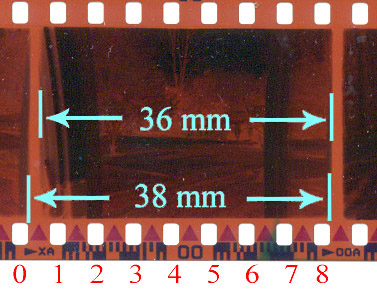 It's only mathematics (and conversion form inch or millimeters to meters), you should be able to apply this with any film you want.

Not the answer you're looking for? Browse other questions tagged film developing fixer or ask your own question.

10
Where can I get 4x5″, 5x7″, or 8x10″ color sheet film (or other hard-to-find exotic film) processed?
2
Film advance lever does not go all the way and shutter button locked
3
Why did my 35mm film turn out "foggy"?
5
Can't advance the film because lever is stuck
2
How much developer/stop/fixer do I need with 120 film?
1
Would it be possible to cross process Kodachrome film?
5
My negative is completely black and opaque — is this a camera problem, my mistake, or the lab's?
5
What is the correct fixing time for Ilford Rapid Fixer?