What lens is best for 'the hobbit' forced perspective look?

In the Lord of the Rings trilogy, all the basic simple shots of hobbits were taken with them in the background, so they would look smaller than real people.

I want to do this in reverse. I have a lion (stuffed toy) that I want to take to the Colosseum in Rome. Remember, they used to always go there to eat the Christians?

Well basically I would like to take a photo of my girlfriend standing beside her pet lion. I want to make the lion look lifesized and have her standing beside it and the Colosseum in the background. Obviously I need to get rid of distractions, so that nothing will give away the scale, but is there an advantage to using one lens over another?

For an example of the basic premise check out, this article on forced perspective.

I know that a longer lens will squash things together, but that would mean being very far away from the subject, which isn't really possible in Rome in the summer.

There are many lenses you can use for this task as long as you are diligent about the placement of people and items. You could use a good prime like a 35mm or 50mm but I would stay away from any wide angles that may cause edge distortion or make the image look like its bending. A good portrait lens will also do the job if you have the distance for the increased focal length. You are going to need to step the lens down pretty far to get a good depth of field so lots of light will always help in these situations.

For what its worth you can do some of it in post processing or using a green screen like parts of the hobbit which was shot on two different sets simultaneously.

Another cool (but very expensive lens) that can create neat miniature effects and or alter perspective is a tilt-shift lens. These complex items allow you to alter focal planes and make some really neat things happen. In your specific case they may not help as they often have very narrow focal planes they are pretty neat none the less.

You might try a split-field closeup lens (filter). Though there are commercial products such as this Hoya 55 mm split-field filter or this Cokin 3-diopter filter, you could experiment with a macro lens set and an abrasive saw. A home-made split lens might not have the quality of a commercial one, but would be interesting to make.

In any event, you'd have two distinct focal ranges; just experiment with the best positions for your friend and Leo (and no devouring maidens out of season!). 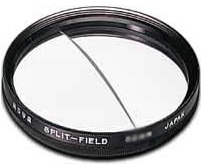 I would take with me a zoom wide angle lens.

The diference on size and perspective on 2 relative close objects is more noticeble than a longer focus distance.

Second, I would really want the coliseum to be in the picture.

The zoom is not really needed for the efect, but it is for the framing.

Not the answer you're looking for? Browse other questions tagged lens perspective or ask your own question.

2
What kind of lens can make a dog look wider and bigger?

5
What is one (single) point perspective photography?
3
How do I take forced perspective photographs with a point & shoot camera?
4
Are the perspective control advantages of a tilt shift lens less important on higher resolution cameras?
5
How to calculate the viewing distance giving natural perspective?
5
How much of a difference is there between photos where perspective is fixed in post as opposed to being shot with a tilt lens?
3
What is the best lens for shooting flat surfaces?
2
Software to change perspective of image of a whiteboard (or some other plane) to look 2D
10
How was the very two-dimensional perspective effect done in this National Geographic lake photo?
3
Why doesn't my Gimp perspective transform apply to the entire image?
2
Why do I get converging vertical lines even when using a normal perspective lens?