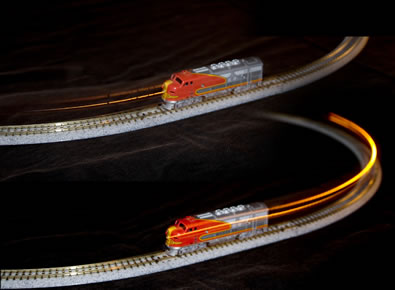 11
What is second-curtain or rear-curtain technique?
1
When would I use rear curtain instead of front curtain sync?
32
What is the best technique for long-exposure photography in good light?
9
Why is 1/250th second used as shutter speed when using a speedlight with my Nikon D7000?
14
How can I think logically about getting correct exposure with flash?
6
How is the circular motion blur created in this Instagram image?
5
How can I create light trails without a blurry subject?
4
What is "Dragging the Shutter"?
6
How to take a picture with subject in focus but with a circular light-trace effect around it?
5
Can I capture motion-trails with a point-and-shoot camera?
See more linked questions

6
Why is maximum shutter speed fixed on Nikon DSLRs when using flash?
4
Nikon D40 and yongnuo yn-560 ii external flash. Slow shutter speed issues
9
Why is there still a flash before my exposure when using second curtain sync?
3
Could I use a manual flash for rear curtain sync?
5
Canon native flash off-camera second-curtain-sync: any news?
7
Can I simulate bulb lighting electronically?
3
How does electronic first curtain shutter match the second curtain?
7
Why does electronic first curtain shutter affect rendering of blurred backgrounds?