Why do light sources appear as stars sometimes?

See for example this photo: 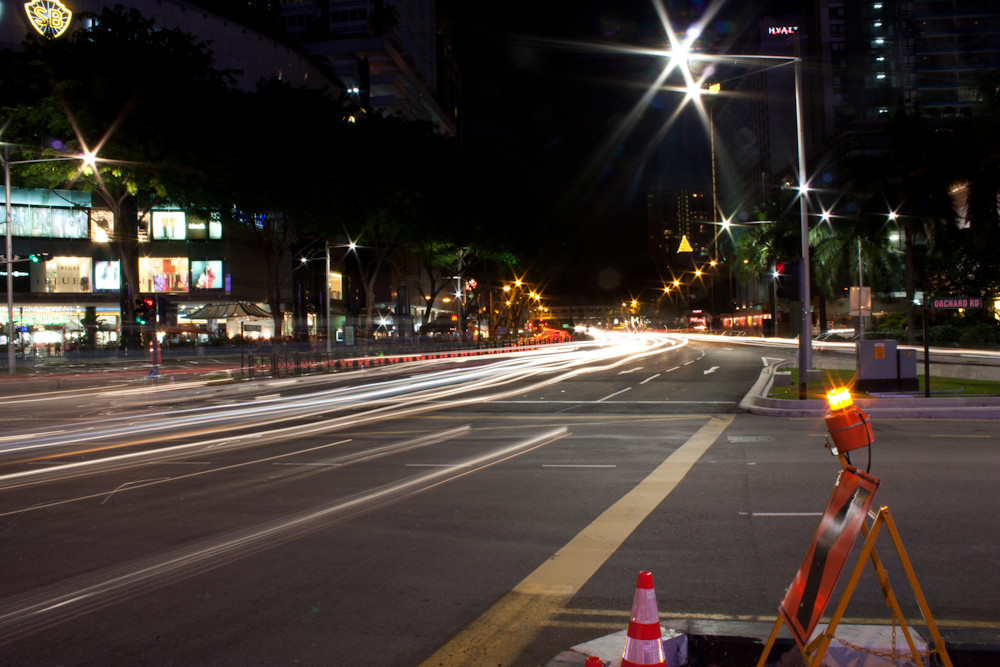 From my experience, the longer the exposure the stronger can this effect be observed. Is this correct? Are there any other factors that influence the creation of these stars (is there a better word for it, by the way?) And what exactly does technically happen?

This appears to be a beautiful example of Fraunhofer diffraction. It is due to the wave nature of light. The effect depends on the wavelength (that is, the color). It is most pronounced when bright light from a practically infinite distance passes through narrow slits, causing the light to spread perpendicular to the slits. This spreads a point-like beam of light into a pair of streaks.

Using a small aperture creates slit-like situations at the corners formed by adjacent blades. Thus, when you have a combination of relatively intense, pointlike, monochromatic light sources in the image and a narrow aperture, you should see a streak (of the same color) emanating from the points in two directions perpendicular to the blades. When your diaphragm is formed by straight blades, this will cause there to be twice as many streaks as blades. However, the streaks for parallel blades will coincide. Thus, for a diaphragm with an odd number of blades (where no two blades are parallel) there will be twice as many radial streaks as blades but for a diaphragm with an even number of blades (where opposite blades are parallel) the streaks overlap in pairs, giving the same number of streaks as blades (but each streak is twice as bright).

A classic example is shown in the first image in the Wikipedia article on diffraction, for Fraunhofer diffraction through a square aperture. You see four well-defined streaks.

The theory is further explained here. This explanation was published in 1967 by CA Padgham. Ken Rockwell mentions it in his discussion of bokeh.

We should expect a certain amount of diffraction always to be present. It is usually slight and averaged out in most pictures: it just contributes a tiny amount to the blurriness that is present in any image when looked at closely enough. Only in images that bring together several factors--points of intense monochromatic light, small apertures, straight diaphragm blades--will it become prominent. This information shows how you can make the stars more prominent or how you can suppress them, by altering these factors for your exposure (to the extent you can).

Finally, length of exposure is related to the occurrence of this effect, as you have observed, but only because exposures with bright points of light are almost always made much longer than needed to record the lights: you're trying to see the rest of the scene, which is much darker. The brightness of the diffraction streaks decreases so rapidly away from their sources that if you used a sufficiently short exposure to properly expose the lights themselves, the streaks would be practically invisible. For instance, there are dimmer but still prominent light sources in your background: they look like windows in the far distance. They, too, must have their own streaks, but those streaks are too dim to see. (Appropriate software filtering might be able to bring them out.)

To answer your second question, the length of the exposure doesn't directly affect the effect. There are two main factors, the first is the size of the aperture (it needs to be small), and long exposures tend to go with a small aperture. The second factor is you need to be shooting into the lightsource. This tends to only happen at night with artificial light, so again people tend to wind up using long exposures.

Here's an example (not mine!) of the effect with a very short exposure to demonstrate the point: 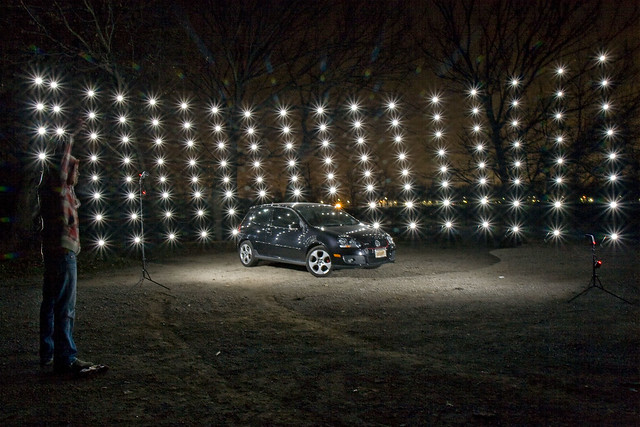 Ok I lied it was a long exposure with moving flashes set to strobe, but each light was on for a very brief period. The other two ingredients - shooting into the strobes, and small aperture (f/14) are what is producing the star patterns.

What you are seeing is the result of the shape of the aperture in your camera. If you put, say, a heart shape or other "filter" on the front of your camera, you'd see a different shape in place of those lights.

You're almost correct in your guess that the longer the exposure, the stronger this affect can be observed. What's actually happening is the smaller your aperture, the more this affect will appear.

So, what is happening is these bright and stationary light sources are having their light bent by the aperture of your lens and the star pattern is being created by the sharp points being defined by the hexagon from the six blades of your aperture. You'll notice that the star rays are all going in the same direction for the lights, that's because of the aperture blades.

Why do light sources appear as stars sometimes? Well, I changed my opinion and share now the prevalent one that the stars come from diffraction effects. The strongest argument for favoring diffraction over reflection comes from the symmetry properties of the star pattern, namely, if N is odd, then N iris blades generate 2*N spikes.

I believe that you will find the answer to your questions under http://www.stfmc.de/misc/diffcontrarefl/tlf.html

This is not a true answer, but an expansion on calculating diffraction patterns from @whuber's answer.

First, we have the diffraction integral. The function Up describes the complex amplitude in the observation plane at a distance (xp, yp) from the optical axis, and a distance Lz from the source (some kind of diffractive object, e.g. pinhole, camera aperture, etc.) Us is a function that describes the complex amplitude in the source plane; for an extremely small pinhole you could use a dirac delta function. The third variable in Us is 0 because for convenience we say the diffractive object is the origin of the coordinate system. The variables xs and ys in its arguments bookkeep for that fact that the object may have some size in the x–y plane.

This may not look like such an awful integral, but k and rsp are both just notation for something bigger:

Integrating a function with a radical with square terms in it both in the numerator of e and in the denominator is a very nasty integral indeed.

One simplifies the integral by removing the square roots by using the binomial series representation and truncating higher order terms. The Fraunhofer integral holds when one needs 2 terms; the Fresnel integral is for when one needs 3 terms. There is some nuanuce to the proof of that, but it is outside the scope of this.

When we start manipulating these things to get the Fresnel and Fraunhofer diffraction integrals, we get three quantities. 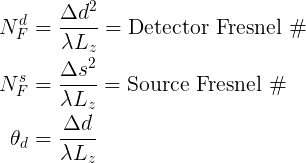 The two integrals are:

and νx and νy are the size of the source in a given dimension divided by the wavelength of light times the distance to the source. Normally it would be written νs = d / (λxs).

To answer @whuber's question as to why you may need one or the other, despite what Wikipedia states, requires a bit of thought.

The "at the focal plane of an imaging lens..." comment is probably lifted from a textbook, and the implication is that the source of the diffraction (i.e. the pinhole, slit, whatever — these equations are agnostic as to the geometry of the source) is very far away. Unfortunately, not only could the lens be at any distance and closer than the Fraunhofer integral allows, but the diffraction also originates inside the lens system for a camera.

The correct model for diffraction from a camera's aperture is an n-sided aperture (n is the # of aperture blades in the lens) illuminated by a point source at the location of the thing in the image that produces the starburst pattern.

When the objects are really far away (a few meters would be fine), the point sources behave as if they are plane waves and the derivations carried out on Wikipedia are fine.

For example, the aperture for a double gauss 50 mm lens is on the order of 40 ~ 60 mm from the image plane. It is imaged by a couple of lenses behind the physical stop to a distance greater than that (this is the location of the exit pupil), but the exit pupil is not where the Us(xs,ys,0) function is centered!

These equations may differ somewhat from the ones on Wikipedia; I would reference OPT 261, Interference & Diffraction at the University of Rochester Institute of Optics taught by professor Vamivakas. The equations in Optics by Hecht should be fairly similar. The equations are for the complex amplitude, to get the Irradiance (a.k.a. intensity or brightness), you would take the magnitude squared of the result.

Here is an example and personally, I love the effect. It can add a bit of artistry to the photo as in the one I will link to.

The cause is due to the aperture blades on my nifty 50mm.

Exposure is a secondary to the stars because I have to close the aperture in order to not overexpose the photos with all the bright lights I am shooting into. If I expose just for the lights I will see nothing but black in the photo where I want to expose the building.

Thus to compensate for the small aperture setting (f/20 in this shot) I must increase my time exposure (20sec) in order to get the proper exposure. Thus, the diffraction occurs or is greatly amplified as I increase the number on my aperture or close it down to prevent overexposure.

Not the answer you're looking for? Browse other questions tagged long-exposure light optics or ask your own question.

2
Why 1 sunbeam for each aperture blade in your lens?
0
Does this effect around the sun have a name ? How do i get that effect?
67
What is a "diffraction limit"?
31
What does a hexagonal sun tell us about the camera lens/sensor?
11
What causes these streaked rays from light sources?
8
How to get "rays" in night photos?
7
How to control "starbursts" around light sources?
6
How many blades does my lens' aperture diaphragm have when I get 12-pointed starbursts?
10
What causes lens flare along specific axes?
6
Is camera damage causing these severe diagonal lines from concentrated light sources?
See more linked questions

16
How can I simulate a long exposure photo using a set of shorter exposure photos?
4
Why do I have blurry star trails?
2
How do analog photography light meters work?
5
Background warping through foreground defocus
3
Why does it seem like large sensors are necessary for good low-light performance?
1
RAW (.dng) on my Phone (OnePlus 5) vs on Picasa 3 (Noisy)
2
Black smudges during long exposure shots? What are these called and why are they there?
4
Light source giving wrong color